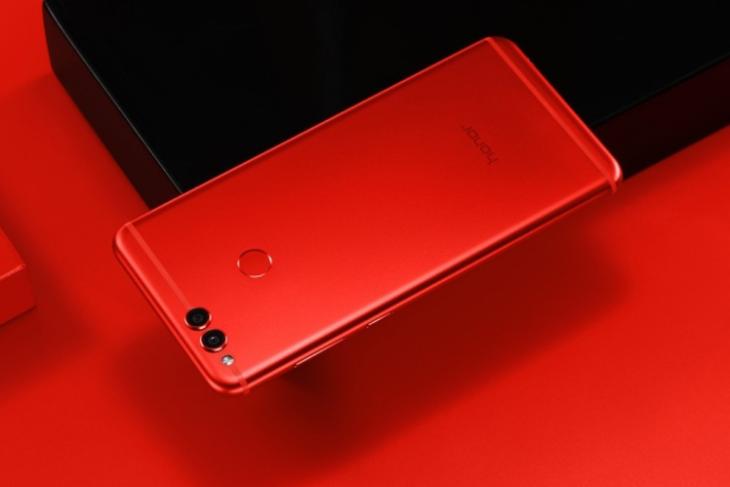 At its official CES presentation in Las Vegas, Huawei’s Honor brand has finally launched a couple of its existing smartphones in the United States. The first is the company’s budget Honor 7X, which will sell for $199, whereas the flagship View 10 device will retail at $500 but its official U.S release date hasn’t been announced yet.

We got our hands on the blue variant of the Honor 7X right after its official debut in India and it is justified to say that it is the best you can get on a budget. But, the company now seems to be mirroring the ongoing trend with the debut of the “visually pleasing” red variant of its budget smartphone. You get all latest features, including taller 18:9 FullView display and dual camera setup, but now with an exciting new paint job.

As for the specs sheet, here’s everything you need to know about the Honor 7X:

The newly launched red color of the Honor 7X is a ‘limited edition’ addition to the existing lineup of color variants, namely black, blue and gold. The Chinese phone maker would be producing only 200,000 units of the red-colored Honor 7X, to be made available in the U.S, Russia, India and Western Europe for Valentine’s Day.

Further, to celebrate the launch of this red-colored variant, Honor has partnered with the audio-heavyweight Monster to gift a special Monster AM15 headphone (also in red) to the first 100 buyers from each country. The device will go on sale on Honor online store in the coming weeks.

In addition to the Honor 7X, the company has also launched its flagship View 10 device, a substantial competitor to the flagship killer OnePlus 5T in the United States at CES ’18. We recently reviewed the View 10 and found that company’s central AI core is a definite plus, that’s working in the device’s favor. Now, all we need to see how it will be received in a market, which already has a slew of AI-driven devices and other gadgets.