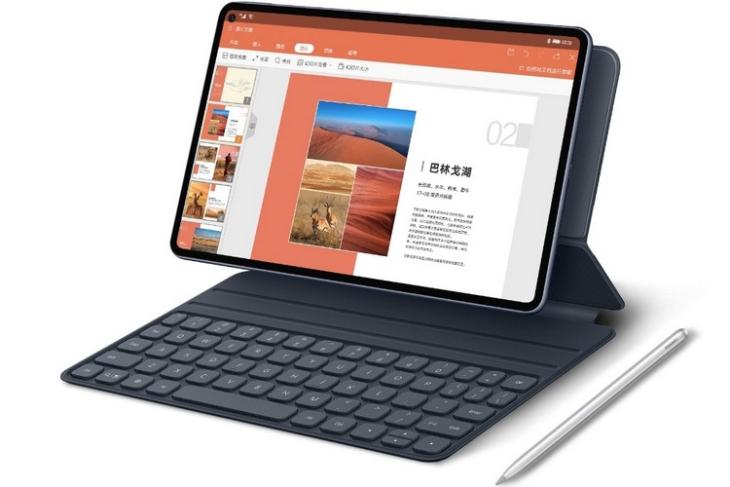 Huawei on Monday announced a new flagship tablet that it believes will be able to compete with other premium tablets in the market, such as the iPad Pro and the Galaxy Tab S6. Called the Huawei MatePad Pro, the device brings one interesting design element that had hitherto only been seen on smartphones – a punch-hole camera upfront. Other than that, the device looks not-too-dissimilar to the Apple iPad Pro, thanks to the slim bezels and rounded corners.

The Huawei MatePad Pro features a 10.8-inch 16:10 WQXGA (2560 x 1600) 2.5D curved glass display and is powered by the Kirin 990 SoC. It comes with either 6GB or 8GB of LPDDR4x RAM alongside with 128GB/ 256GB/ 512GB of built-in storage. The device carries a 7,250mAh battery with 40W wired charging and 15W wireless charging. It also supports reverse wireless charging up to 7.5W. It runs Android 10 out-of-the-box, but as one would expect, lacks Google’s apps and services thanks to the US government’s ongoing embargo against Huawei.

The MatePad Pro also comes with a Samsung Dex-like feature called ‘Computer Mode’ that brings a desktop interface on the tablet. Another notable feature is the M-Pencil for Graffiti painting, document processing, note-taking and more. The device comes with 4096-level pressure sense and 20ms ultra-low latency. The M-Pencil can be wirelessly charged by magnetically attaching it to the top of the tablet. An hour of charge is said to offer up to ten hours of continuous usage.

The Huawei MatePad Pro is being offered in Orange, White, Green and Gray color options and, will be available for purchase from December 12. However, it is already up for pre-orders on Vmall at a starting price of 3,299 yuan (around Rs. 33,000) for the 6GB + 128GB Wi-Fi-only model, while the LTE model with the exact same specs has been priced at 3,799 yuan (around Rs. 38,000).