There’s no doubt in the fact that we capture a lot of photos. Be it from a dedicated camera or a smartphone. However, not all us are aware that the photos we take pack in a lot of our personal data. Every photo we capture features information around the camera unit (camera maker, model, F-stop, exposure time, ISO speed, aperture, flash etc.), resolution of the photo, date of capture, flash data, location & GPS info etc. Well, the data stored in the photos is called EXIF data (Exchangeable Image File Format) or metadata of photos. While EXIF data can be useful to sort or filter images, it also means that if you post a photo online, a lot of your personal data is public along with it. While various websites like Facebook, Twitter, image hosting services like Imgur remove EXIF data when you upload, there are some services like Flickr, Dropbox, Google+ and more that keep the EXIF data intact.

So, if you don’t want people to know the location you took a picture at or get any EXIF data, you should consider editing or removing EXIF data from your photos. Well, that’s what we are to help you with. Here’s how you can edit or remove EXIF data from photos on different platforms:

Windows includes a native method to edit and remove EXIF data from photos. You can do so by simply right clicking on a picture and going to “Properties“. Here, go to the “Details” tab and you will find the EXIF data. You can either edit some details or remove the data by clicking on “Remove Properties and Personal Information“. 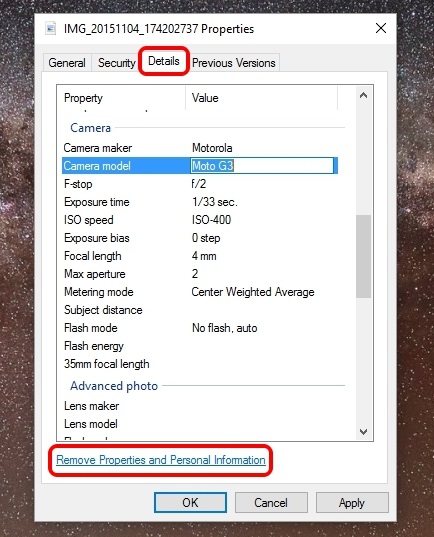 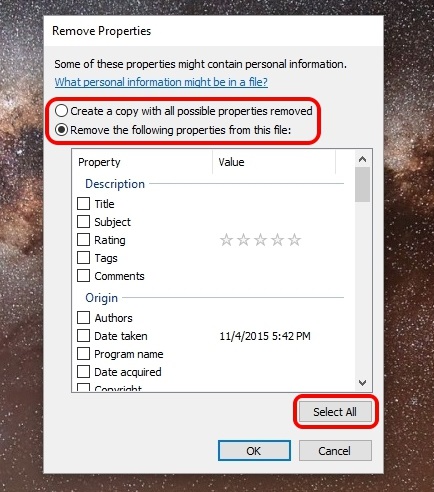 While it works, you cannot edit nor remove all the details. Thus, we’ll recommend you to use a third party software to do the same. 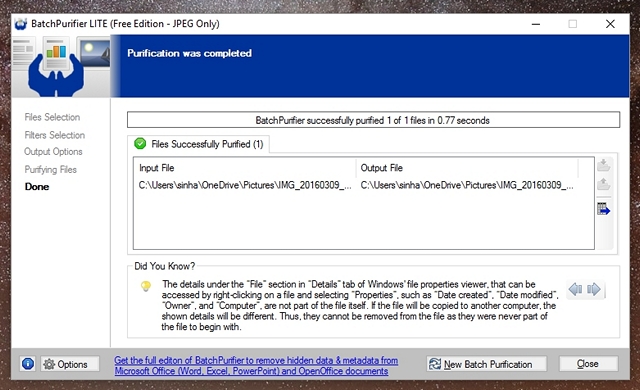 There are a plethora of other Windows software that claim to remove EXIF data or edit them but we tried most of them and they failed to work for us. So, you will have to rely on either the native Windows way or just removed JPEG files via BatchPurifier.

While you can easily view EXIF data on your Mac, you will have to rely on a third party app to remove EXIF data. To view EXIF data of a photo, you can just open the photo in the Photos app and hit the info icon. You will then see the EXIF data including details around the camera and the location of the image. 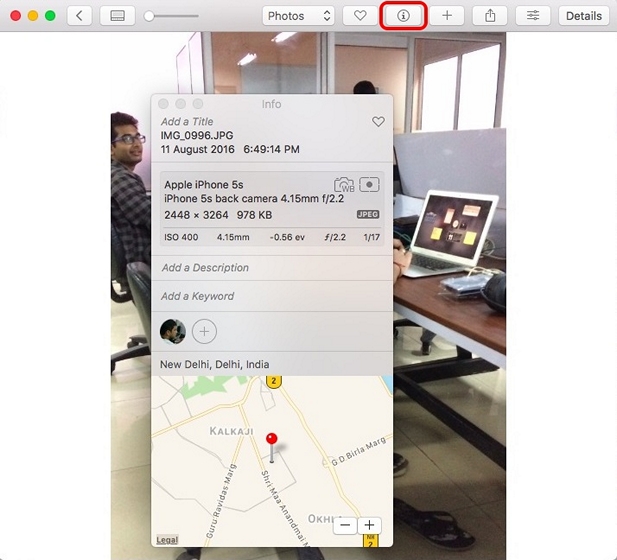 To remove EXIF data from the photos, you can use the third party software dubbed ImageOptim. The app is easy to use and all you need to do is drag & drop image files into the app and it will automatically remove the EXIF data and save the photo replacing the original photo, so you don’t have any problems with duplicate photos. 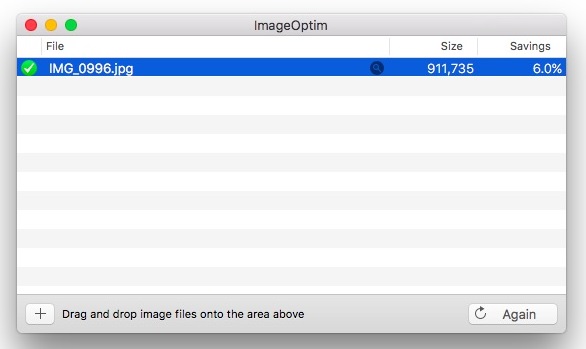 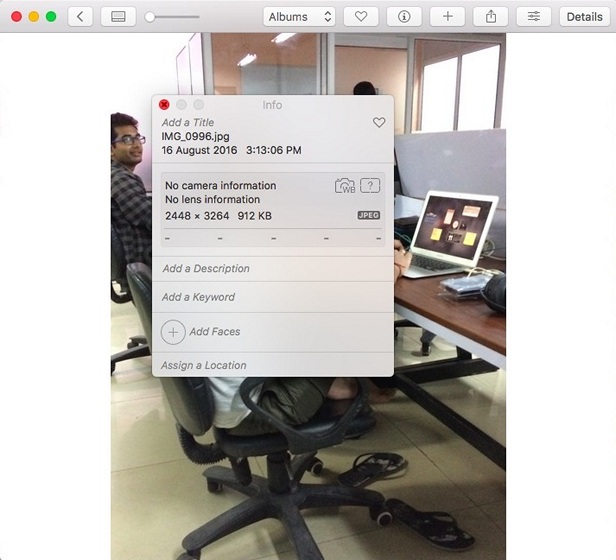 While ImageOptim removes EXIF data, it does not let you edit it. We also tried a number of other apps that claim to edit EXIF data on Mac but sadly, none of them really worked for us.

If you don’t want your GPS info to be saved when you take a photo on Android, you can disable the geotagging feature. You can go to Settings in most of the camera apps that come pre-installed on Android smartphones and turn off “Save location”.

Or better yet, you can go to Settings->Apps->Camera->Permissions and disable “Location”. 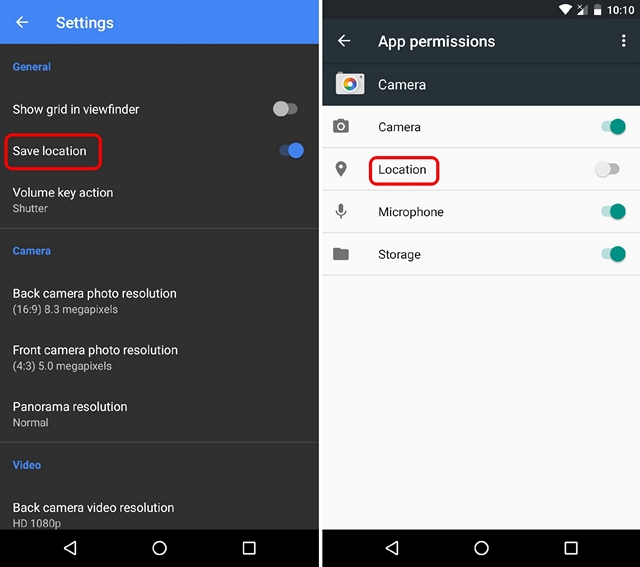 In case you do want to save EXIF data but want to remove or edit it before you share, you can use the Photo Exif Editor app (Free, Pro $2.99). After you have installed the app, you can just select a photo and edit its metadata with ease. While the app is supposed to remove EXIF data too, it was a hit and miss in our testing. The app is available in a free version but if you want to get rid of the ads and see full RAW data, you can get the Pro version. 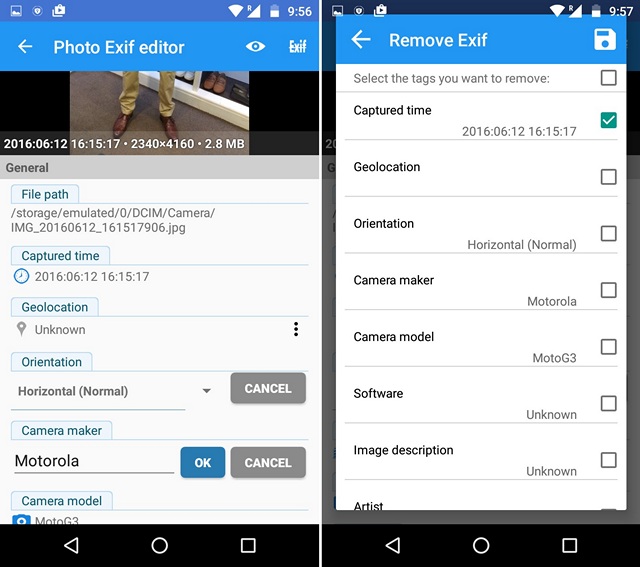 If you just want to remove EXIF data from photos on Android, you can use the EZ UnEXIF app (Free, Pro $0.99). You can just install the app, open it, add photos from Gallery or the file browser and select if you want to create a new EXIF free copy of the photo or replace the original and that’s it. The EXIF data will be removed from the picture. Easy, right? The app is available in a free version but it’s laden with ads, although they aren’t the full-page intrusive ones. If you do want to get rid of the ads, you should get the Pro version. 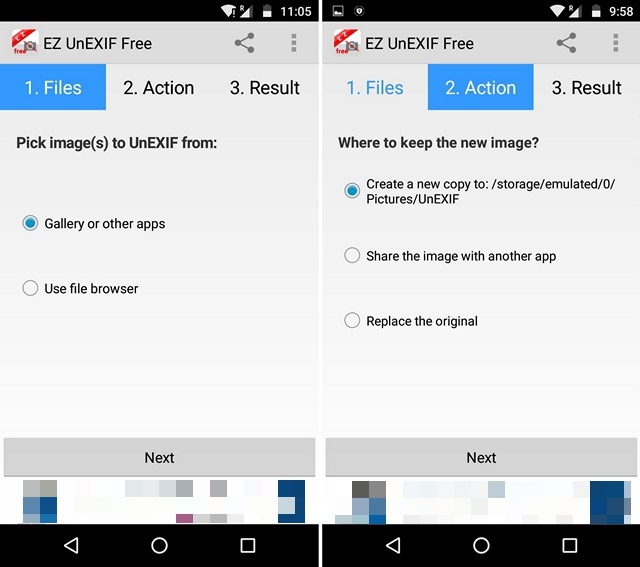 Like Android, you can prevent the camera app on your iPhone or iPad from taking up geotags. To do that, just go to iOS Settings->Privacy->Location Services, tap on “Camera” and select “Never“. 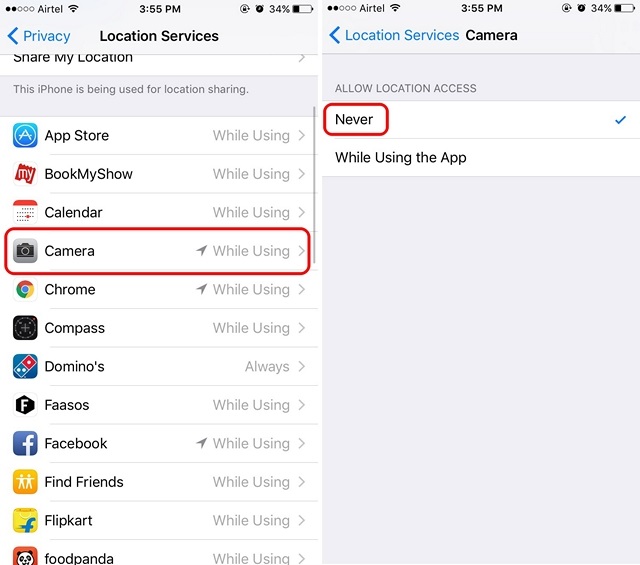 If you want to keep the EXIF data and only want to remove it when you share a photo, you can use the Metadata Remover app (free with in-app purchase for full version). The app lets you easily remove EXIF data. You can just tap on the settings cog icon, hit the “Remove Metadata” button and the app will save a duplicate photo without any EXIF data. 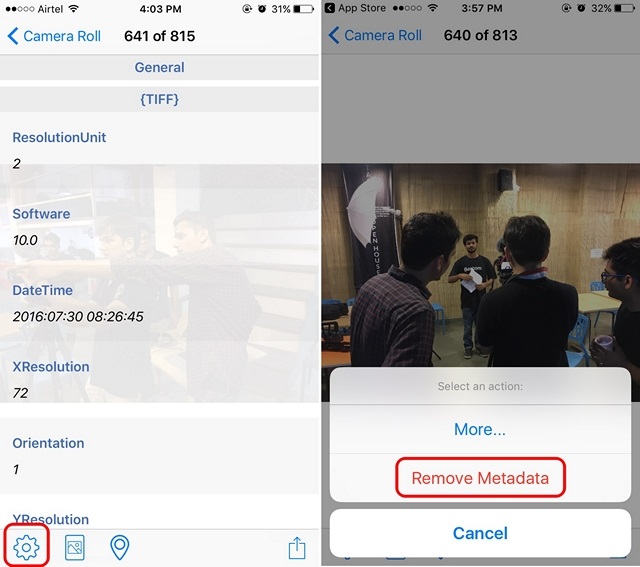 If you don’t want to use a third party app to remove EXIF data on any of the platforms, the best way is to take a screenshot of the image. Since screenshots don’t have any EXIF data, you will have a picture without any metadata. You can even edit images in different photo editing apps to remove EXIF data. Simple yet effective, right?

SEE ALSO: How to Remove Background from Images Without Photoshop

Post your photos online without any of your personal details attached

So, those are the ways to edit or remove EXIF data from photos on Windows, Mac, Android and iOS. We do agree that most of these platforms lack any comprehensive apps to edit or remove metadata but we have tried them all and brought you the ones that work. So, try them out and let us know your experience. Sound off in the comments section below.