I don’t need to tell you, how popular GIFs have become in the present day and age. Doesn’t matter which social media network you are on, chances are, you will encounter a GIF in your feed sooner rather than later. GIFs are especially popular on Twitter. The 140 character limits of Twitter makes it really hard for users to express themselves properly. Hence, users often compliment their tweets with corresponding GIFs. Also, no one can deny the fact that GIFs are really funny. Because of these benefits, GIFs are heavily used on Twitter. However, there’s an inherent problem with using GIFs on Twitter. The service does not allow you to download the GIFs on your phone. I don’t know how many times I came across a GIF on my Twitter feed, which I wanted to download so badly, but couldn’t. So, if you are someone who went through the same frustration, here is how to download GIFs from Twitter on your phone:

Firstly, GIFs cannot be compressed as much as MP4 files. Converting the GIFs to MP4 allows Twitter to compress the file so that the file loads faster. Also, users can pause the MP4 files while it’s playing, something which they cannot do with a GIF file. Thus for lesser size and better control, Twitter converts the GIFs into MP4 files. This is the reason you cannot download a GIF from Twitter, because technically, it’s not a GIF but a video file.

Yeah, I understand Twitter’s point of view but what if I really want that GIF. Well, there’s still a way you can use to download GIFs from Twitter. Although it will not be as simple as downloading it directly from the Twitter app, it’s not that difficult too. All you need is an app and few extra steps. Let’s go through them.

1. Okay, the first thing you need is an app which will help you download the GIF from Twitter. There are a lot of Android apps out there, but in my experience “Tweet2gif” works the best. So click on the link to download and install the app.

2. Now, let’s just open the Twitter app and find a GIF we want to download. When you find the GIF you want to download, tap on the more option (the down arrow button) and copy the tweet’s link by tapping on “Copy link to Tweet”. 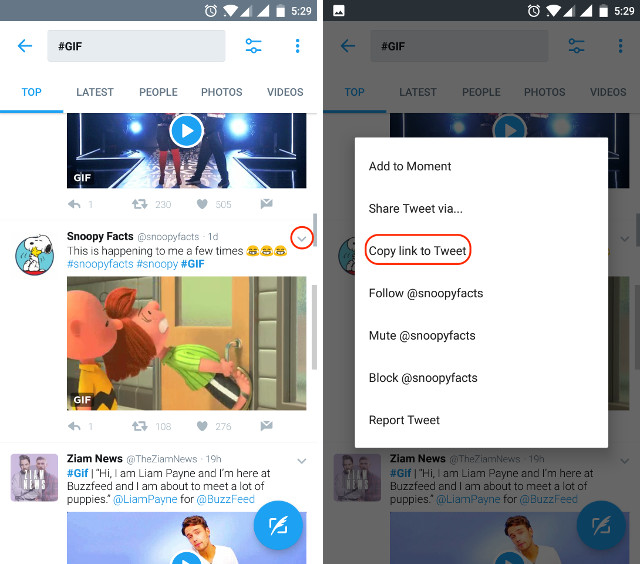 3. Now open the Tweet2gif app and paste the link in the URL section of the app. You can either hit the “Paste” button and the URL will be pasted automatically or you can do it the usual way by long-pressing on the empty field and selecting paste. 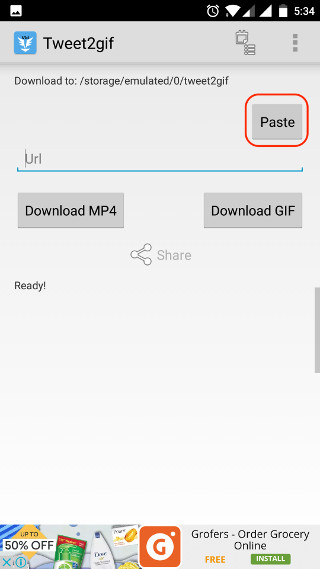 4. The next step is pretty easy. Just tap on the “Download GIF” button and the GIF will be downloaded onto your device. Once the GIF is downloaded, you will see the confirmation on the app’s page. You will find the GIF in your default Gallery app (or whichever app you use instead). 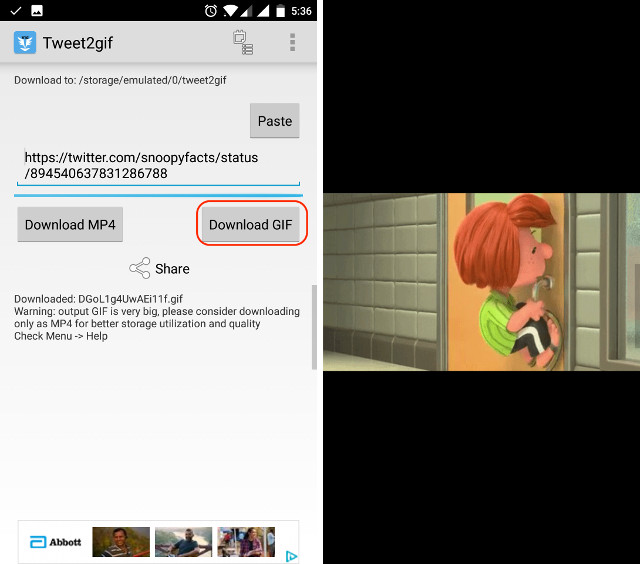 That’s how easy it is to download GIFs from Twitter on your phone. It just needs a couple of extra steps, that’s all.

The process to download GIFs from Twitter on iPhone is similar to that on Android. On the iPhone too, we will utilise a third party app for downloading the GIFs. Here are the steps to do it. 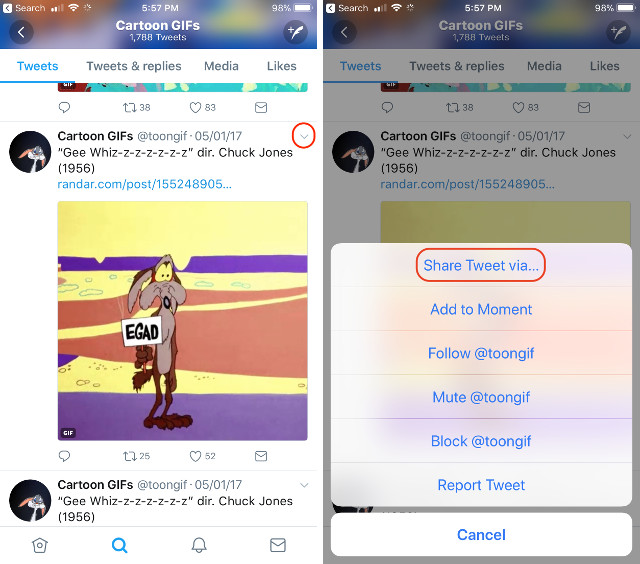 3. Here, copy the link by tapping on the “Copy Link to Tweet” button. 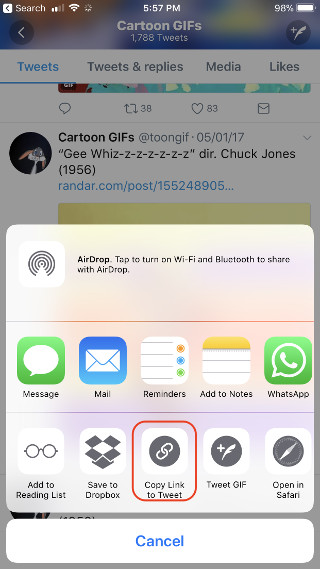 4. Open the GIFwrapped app and tap on the “Search” button present in the bottom row. Here, tap on the search field and then hit the”Use the Clipboard” button. It will paste the link you copied in the second step. 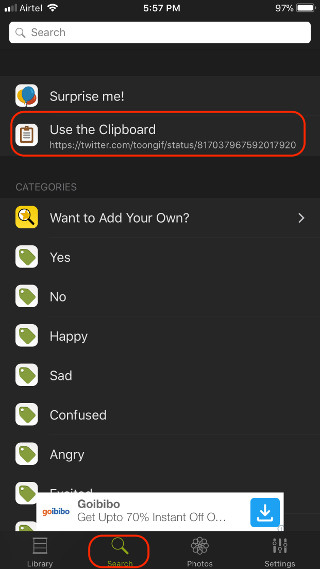 5. Now, wait for a few seconds while the GIF loads. Once it does, tap to open it. Here, hit the share button present at the top right corner of the app to open the sharing options. 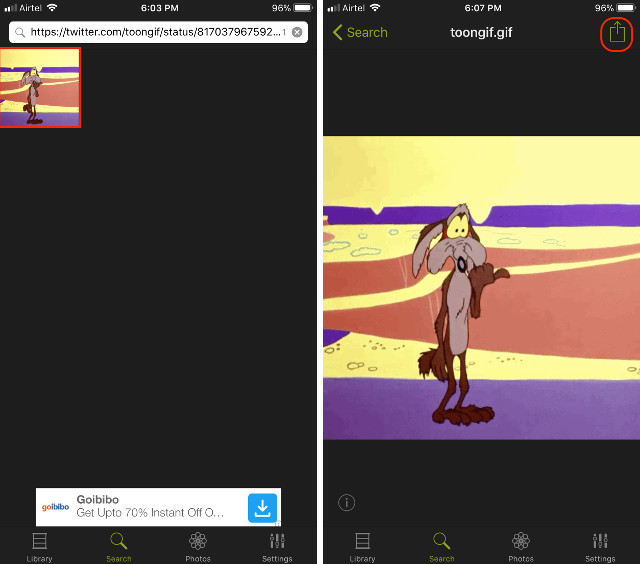 6.  Now tap on “Share Image” and then “Save Image”. This will save the GIF on your phone. 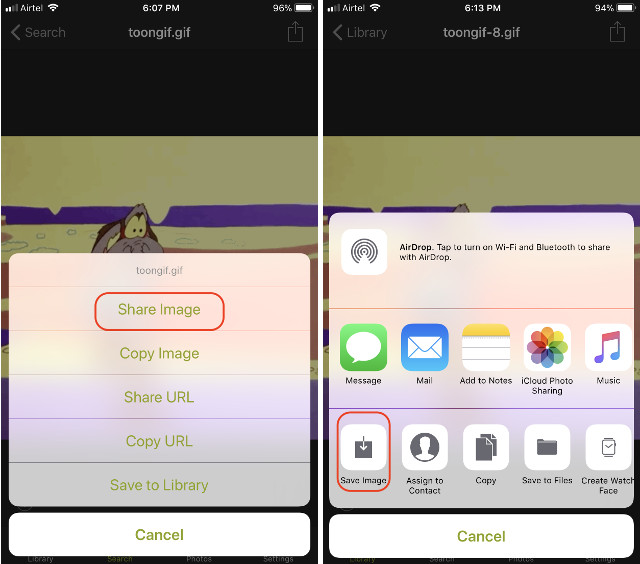 SEE ALSO: How to Create GIFs on Mac With Ease

Although Twitter makes it a little bit harder to download GIFs, it is not impossible. Considering the benefits that we get when Twitter converts the GIFs to MP4s, I really don’t mind these extra steps. What about you? Are you OK with the extra steps or would rather have the functionality to download GIFs directly from the Twitter app? Share your thoughts with us in the comment section below.