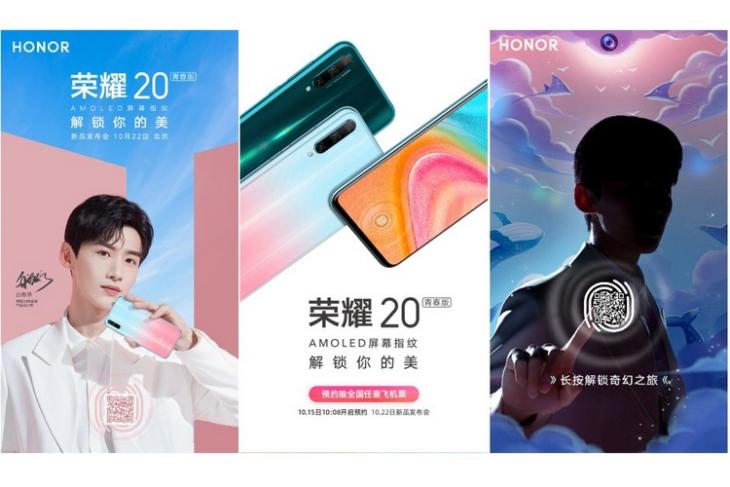 Huawei has announced it will launch the Honor 20 Lite mid-range smartphone on October 22. Multiple teasers posted by the company on its official Weibo account recently have confirmed that the device will come with a punchhole camera housing upfront, an under-display fingerprint scanner and a triple-cam setup at the back. One of the teasers also seemingly suggests that the device will be available in at least two gradient colors.

While Huawei is yet to confirm anything officially about the phone’s specifications, a listing on the website of China’s electronics certifications agency, TENAA, has already revealed some of its key tech specs, which include a 6.3-inch 2400×1080 FHD+ AMOLED screen, the Hisilicon Kirin 810 processor, up to 8GB of RAM and up to 256GB of storage, although, lower-end models will ship with 4/6GB of RAM and 64GB/128GB of storage.

On the imaging front, the device is expected to offer a triple-camera setup at the back, comprising of a 48MP primary sensor with an f/1.8 lens, an 8MP Ultra Wide Angle snapper and a 2MP depth sensor. Up front, there promises to be a 16MP shooter with an f/2.0 aperture for selfies and video calls. The phone is expected to run on EMUI 9.1.1 based on Android 9 Pie and will apparently carry a 4,000mAh battery with 20W fast charging.

As pointed out by FoneArena, Huawei already sells a Honor 20 Lite in Malaysia, so it will be interesting to see how the company will brand the new device should it decide to sell it outside China. Either way, with the expected launch scheduled for next week, we shouldn’t have to wait too long for more info.