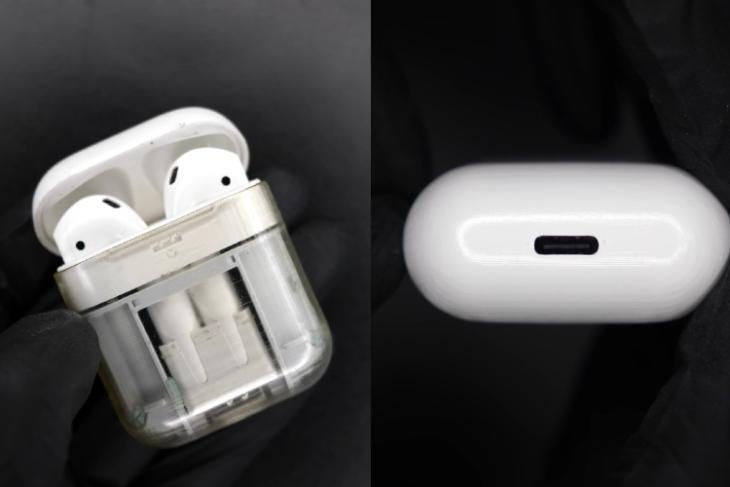 If you are a tech enthusiast like us at Beebom, I’m sure you already know about the guy who developed the world’s first USB-C iPhone. For those unaware, Ken Pillonel is a Swiss engineer, currently pursuing a Master’s degree in Robotics at the Swiss Federal Institute of Technology, who is known for his unusual tweaks to smartphones and other gadgets.

Last year, Pillonel developed what Apple did not till now, despite regulatory pressure – an iPhone with a USB-C port. The device later went on to surpass the $100,000-mark on eBay and become one of the priciest iPhone models in the refurbished market. Earlier this year, the engineer also developed the world’s first Android device with Apple’s proprietary Lightning port.

Now, as part of a new project and to make all his Apple products USB-C, Pillonel has developed the first AirPods with a USB-C port. The tweaker recently shared a short video, showcasing some footage of the modification process, on his official YouTube channel. He says that a full-length video is on the way. You can check out the trailer video attached right below.

In the description of the video, Ken writes that the mod currently only works on the first and second-gen AirPods. Hence, it will not work on other AirPods models such as AirPods Pro or AirPods Max. He linked all the components that are required for the mod and also confirmed that the entire project will soon be made open-source for any developer to tweak their AirPods.

So, if you are a developer, you can check out all the components from the video description and stay tuned for the full video on Ken’s YouTube channel. Also, let us know your thoughts about a pair of USB-C AirPods in the comment below.