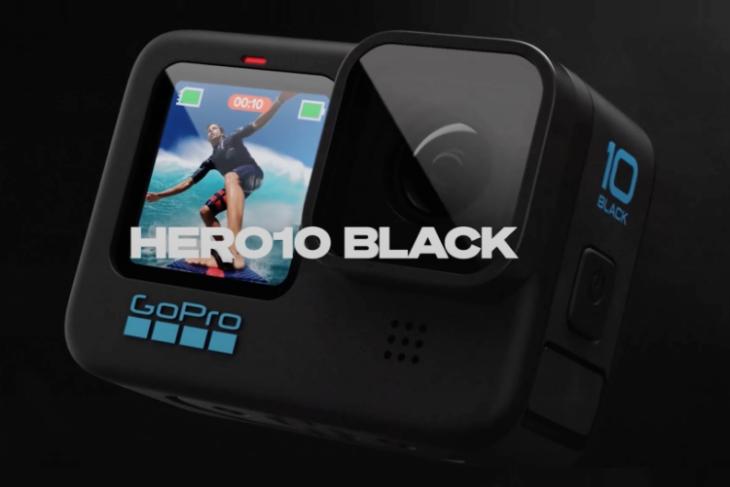 GoPro has today launched its latest flagship action camera, the GoPro Hero 10 Black, with significant upgrades over its predecessor. While the design has not changed this time around, you now get a new custom chip, improved photo and video capabilities, and a lot more. All of these upgrades do come at a slightly higher price, though.

So let’s not waste any more time and check out the key specifications of GoPro Hero 10 Black:

First up, GoPro has upgraded the brains of its action camera. It has introduced a new GP2 system-on-chip, which is an upgrade over the GP1 chip that first launched with the Hero 6 Black in 2017. The new GP2 chip doubles the frame rate, offers snappy performance, and has more responsive touch controls.

Moreover, you can also capture 4K @120FPS and 2.7K @ 240FPS videos to level up your travel vlogs or stunt videos. If that doesn’t satisfy your hunger, this flagship action camera also lets you frame grab 19.6MP stills from a 5.3K video, which is amazing. GoPro Hero 10 Black offers four photo modes, including Burst, Night Photo, Supr Photo, and RAW photo.

Hero 10 Black also brings better video stabilization with HyperSmooth 4.0, allowing you to shoot smooth videos up to 5.3K @ 30FPS. The camera also supports up to 45-degree horizon leveling and a new hydrophobic (and water-shedding) glass lens cover. GoPro also boasts of its low-light photo and videography capabilities, mod support (same as its predecessor, and three ways to offload content from the camera.

Finally, Hero 10 Black includes the same 1,720mAh battery as its predecessor, so don’t expect any major improvement on the battery backup front.

The GoPro Hero 10 Black is priced at $499, which is $50 higher than last year’s Hero 9 Black. You can, however, purchase it for $399 if you also get a one-year GoPro subscription that costs $50. So, what are your thoughts on this upgrade? Do let us know in the comments section below.