As far as action cameras go, GoPro is pretty much the biggest name in the game. The company has been making action cameras for years and is well known for its high-performance cameras with a huge ecosystem of accessories and mods, and obviously, the HyperSmooth stabilisation. This year though, GoPro launched the Hero 9 Black and as you’d expect, it has better everything… and a color display up front as well. I have been using the GoPro Hero 9 for quite some time now, and if you are wondering whether you should get the GoPro Hero 9 for your action-cam footage, and if its worth the price tag of Rs. 49,500, here’s my review of the new camera.

For this review, GoPro sent over the Hero 9 bundle over to me, so I got a few more accessories in the box than you would if you just buy the camera. In my box, I got the following:

To be honest, I didn’t quite use the floating hand grip during my review. Mostly because the pandemic has forced me to not really step outside for walks. That said, it’s nice to have, especially if you’re going to be vlogging with this camera — something that’s easier now thanks to the front display, but more on that later.

First things first, the GoPro Hero 9 is a remarkably well built camera. That’s not surprising, after all the GoPros of the years past have never been poorly built. It’s still the same GoPro you’d expect — small enough to be carried in your pocket, and strong enough to take quite a beating. It’s also waterproof up to 33 feet out of the box, which is great for anyone looking to shoot water-sports footage. 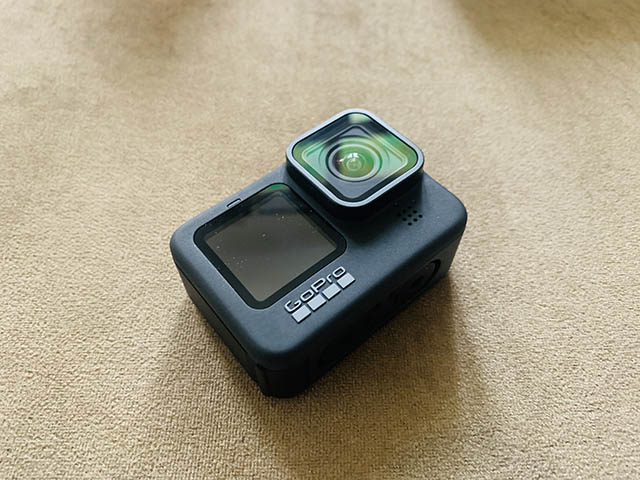 The rubber finish all over the metal build of the camera gives it a nice, grippy feel in the hand, and the camera, while small, feels substantial to hold. On the bottom, you get the built-in mounting feet, same as the GoPro Hero 8. These fold into the camera when not in use, and can be pulled out when you need to mount the camera. 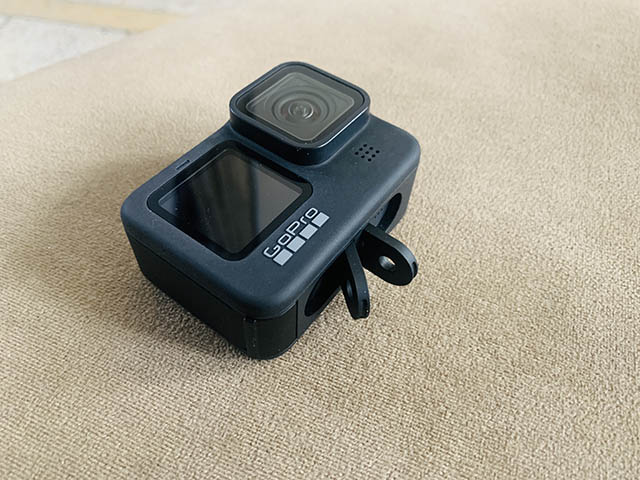 The Hero 9 Black is also the first camera from the company to have a color display up front. This is a relatively small, 1.4-inch screen, but it will prove useful for vlogging, making it easier to frame shots. On the back you get a 2.27-inch touchscreen display which looks pretty much the same as older GoPros. It’s bright so you can see what you’re recording even in direct sunlight (for the most part), and it acts like a viewfinder. 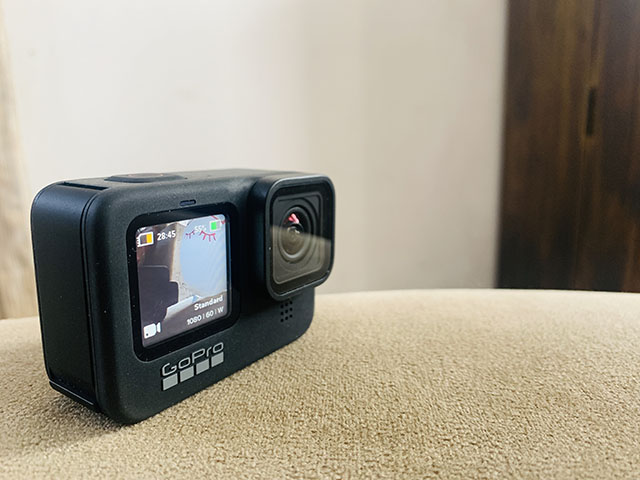 There are two buttons on the body of the camera, a ‘Mode/Power’ button on the side and a recording button up top. These aren’t the best feeling buttons I’ve ever used on a camera, but they are very tactile so you won’t be left wondering whether the button was pressed at all or not. On the other side of the camera is where you’d put in the battery, and the microSD card. This latch opens up with some difficulty, and inside you’ll also see the USB-C port for charging or for transferring data. 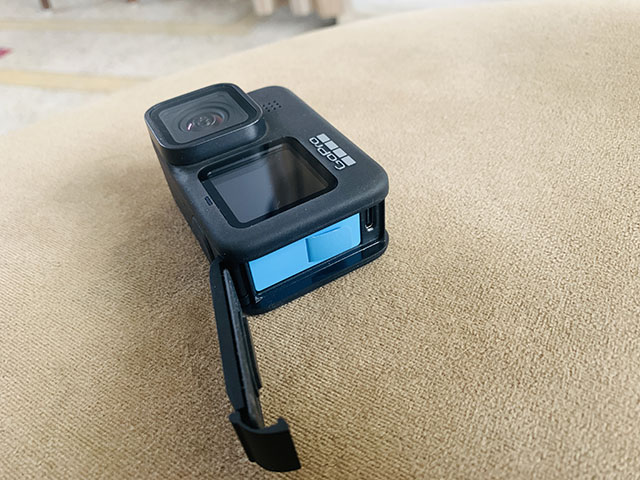 Really, there are no complaints in this department. The GoPro Hero 9 is a well built, well designed camera that doesn’t really leave you wanting for more.

Oh, also, the lens can be removed now from the GoPro Hero 9. Just a twist on the lens and it screws right off. Then you can install the new GoPro Max Lens Mod to get a wider field of view on your shots. 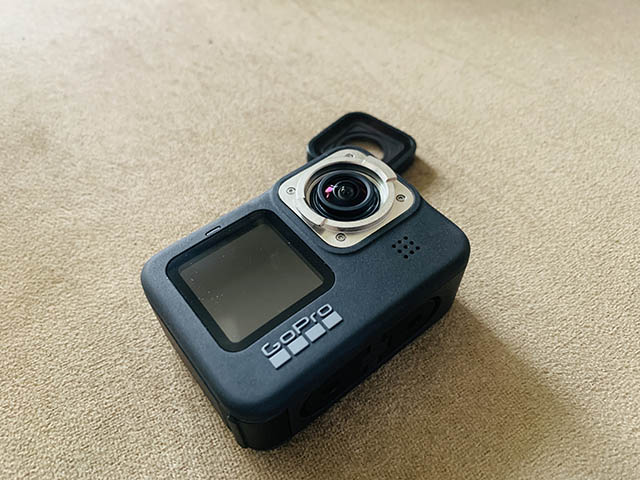 We can talk about a number of things in the GoPro Hero 9 Black, but video modes and quality is arguably the most important aspect of this camera. After all, it is an action cam.

The Hero 9 Black offers a huge number of possible settings for videos, so you can pretty much find suitable options for your needs. There are some preset settings available out of the box as well in case you just want to power on your camera and start recording. 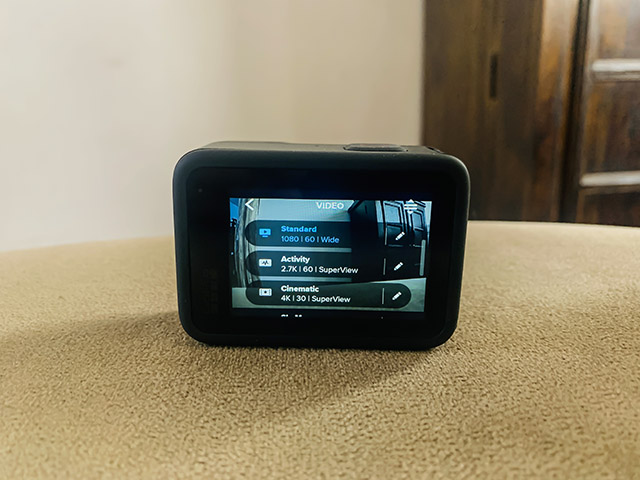 Clearly, these options don’t really push the camera to the limits of what it can achieve. But they are good to have at hand. More presets can be created and added to the camera, or you can edit the existing options as well. For example, my preferred preset for testing the camera was this Custom one I made to shoot in 5K at 30FPS with HyperSmooth enabled. Granted, I would normally stick with 4K and 1080p videos, but since 5K is the new thing on the Hero 9, that’s what I wanted to test out. 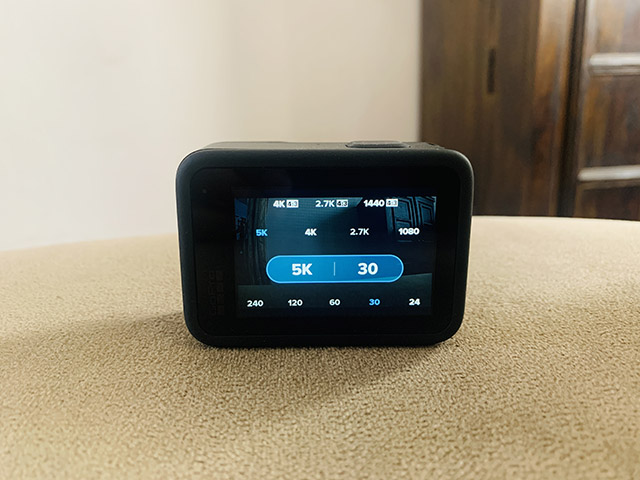 The Hero 9 Black also offers a plethora of video features which you will most likely notice when you are creating your own presets. There’s a new Hindsight feature which can save up to 30 seconds of footage from just before you pressed the shutter button — which should prove to be helpful for clicking pictures of things like lightning strikes or maybe even fireworks.

The Hero 9 Black also offers a Scheduled Capture feature. With this, you can set up a time and your GoPro will automatically turn on and start recording at that time. That’s gonna be useful if you want to shoot videos of the sunrise but don’t want to wake up at 5am. I mean, I can sympathise with that.

Coming to actual video footage, well, I’m not an extreme sports person, so naturally I did not jump off a cliff with a GoPro attached to my head. I did, however, mount it on my car and recorded 5K footage from it. Here are my takeaways:

The Hero 9 Black can shoot in 5K, sure, but it doesn’t seem to be as big a quality jump as I had imagined it to be. 5K videos are really sharp as you’d expect, but I don’t see the need for shooting in 5K on the GoPro when 4K looks just as good to the eye. Also, GoPro’s Hypersmooth technology has been impressive in years past and this year, with Hypersmooth 3.0, GoPro footage basically feels like it was shot with a gimbal and a rig all mounted on my car. It’s really really impressive in terms of stabilisation.

I also noticed that the Hero 9 does a pretty decent job handling exposure changes as you can see in the video below as I was entering the underground parking structure at Select City Walk.

There’s also a ‘Boost’ feature which can get you even more aggressive stabilisation. In usual scenarios, such as driving a car, ‘Boost’ feels too aggressive for the kind of footage you’re shooting. However if you’re horse riding, skiing, or doing something where there’s a lot of shake in the video, this Boost feature will definitely help get more usable footage.

There are other modes including slo-mo, timelapse, timeburst, and a lot of other ones that can prove useful depending on the kind of video you’re trying to shoot with your camera.

The GoPro Hero 9 shoots 20MP stills and while I’m not one to use a GoPro as my still shooting camera, the pictures do turn out decently good enough. I only took a few pictures with this camera before I came to the conclusion that it’s easier to use a smartphone, and that the GoPro’s camera quality for images, while decent, is usually not at par with most flagship and upper-mid-range smartphones of today.

Still, there are quite a few options for pictures here. The GoPro Hero 9 Black can shoot 20MP still images in JPEG format, or even RAW if you want. However, it uses the .GPR format for RAW images which is based on Adobe’s DNG RAW format, but won’t open in software other than Adobe Photoshop, and Lightroom. So that’s a bummer, but it’s not an issue because I don’t really want to shoot RAW stills from the GoPro. 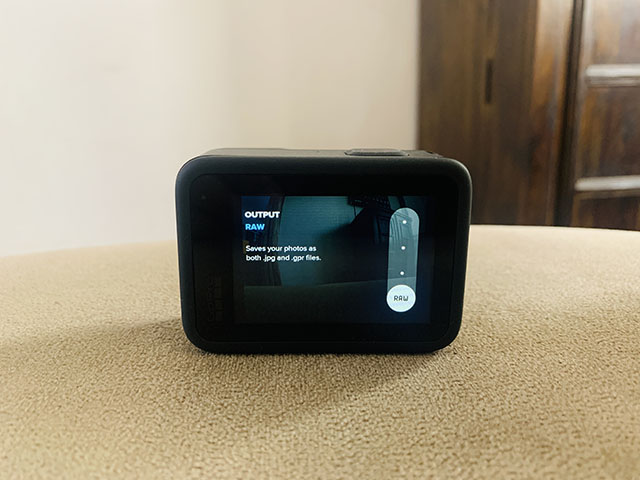 Other than that, you can shoot photos in burst mode which shoots at 25fps, and there’s a LiveBurst mode as well which basically captures Live Photos that can be shared as short video moments. Side note: live photos might be the closest we’ll come to Harry Potter-like moving pictures. Just saying. 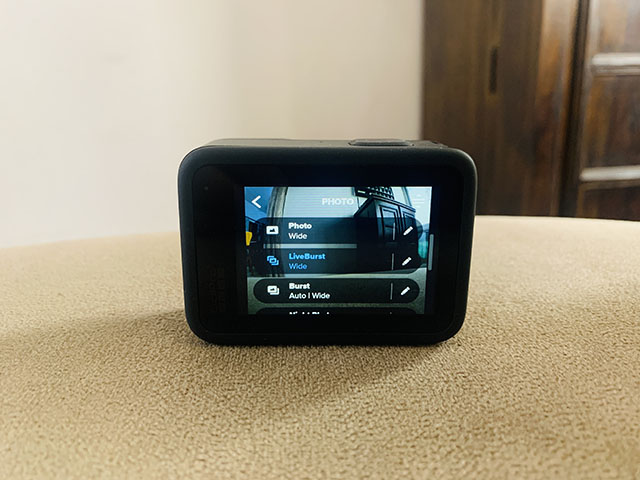 The Hero 9 Black also has a dedicated Night mode for photos which tries to bring in more light, denoise the image etc to get a better low light shot. It is also only decent in terms of the output quality.

Now, since I was shooting in 5K, obviously the camera died really quickly, but in 1080p or in 4K, you should get much better battery life. Personally, I noticed the GoPro lasting around 90 minutes shooting 1080p footage with Hypersmooth on. There are a lot of settings under the hood here, so battery life will vary depending on what you’re doing.

My suggestion is to either get the bundle, so you get two battery packs, or just buy additional GoPro batteries if you’re going out to shoot.

Essentially, the Hero 9 is what GoPro has always been — an impressive action camera that does its job really well. However, this year, the GoPro Hero 9 is taking multiple leaps to make itself a lot more convincing as a purchase option than I would normally expect. It has a bigger sensor which can shoot 5K30 videos, and 20MP stills. Hypersmooth 3.0 is just insanely good. It has a front-facing colour display that can be your viewfinder for vlogging, and it has a bigger battery. Those are all solid improvements, and if you are looking for an action camera, the GoPro Hero 9 Black makes perfect sense at Rs. 49,500.