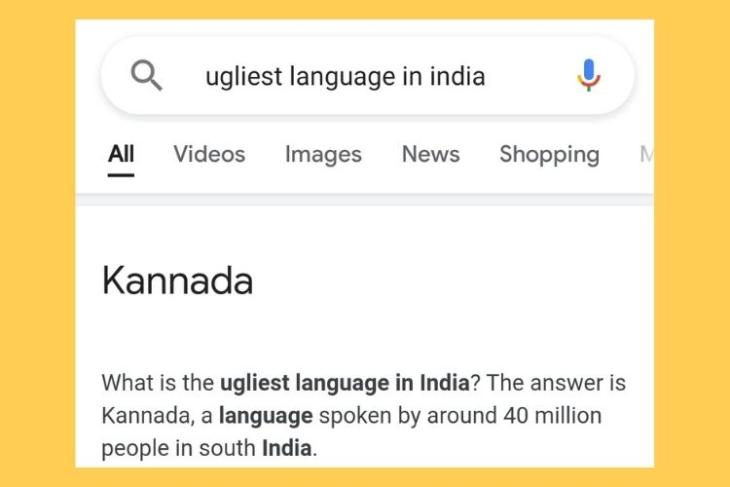 The recent situation escalated when Kannadigas found that Google shows Kannada as the result for the “ugliest language in the world” search query. Following this discovery, Aravind Limbavali, the Minister of Forest for the Karnataka government, took to Twitter to lash out at Google.

Limbavali shared a tweet thread from his official Twitter handle stating that Kannada has been the “pride of Kannadigas” for almost one-and-a-half millennia. So, Google marking it as the “ugliest language in India” is merely an attempt by the Mountain View giant to insult their pride, wrote Limbavali. The Minister then demanded an apology from Google as soon as possible. You can check out the tweet right below.

If Kannada is now called ugliest language in India, it is merely an attempt by @Google to insult this pride of Kannadigas. Demand apology from @Google ASAP to Kannada, Kannadigas. Legal action will be taken against @Google for maligning the image of our beautiful language! 2/2

Soon after the tweet by the Karnataka Minister, Google took to Twitter to share an apology letter for the mishap. The Mountain View giant wrote that “Search isn’t always perfect” and the way content on the internet is described can lead the system to sometimes yield unfavorable results.

The company further stated that the result is “naturally” not reflective of the opinions of Google. You can check out Google’s apology tweet attached right below.

As of now, Google has removed Kannada from showing up as a search result for the “ugliest language in India” query. However, the company saw a ton of backlash from other Kannada-speaking populations in the country. What are your thoughts on this situation? Is it Google’s fault? Let us know in the comments below.

Google Search Dark Mode for Desktops Rolling Out for Some Users