Originally released in 2018 on Android, Google’s Podcasts app has now finally landed on iOS. The app is also getting new features and a complete design overhaul on Android, Google said in an official blog post. The company is also adding support for subscriptions on the Google Podcasts website, ensuring users will be able to sync their content across devices, enabling them to pick up right where they left off while listing to a podcast.

The revamped app, which started rolling out on Android and iOS devices on Wednesday, comes with a three-tab interface: Home, Explore and Activity. The Home tab features a feed of new episodes and gives users quick access to their subscribed shows. When they select an episode they’d want to listen to, they’ll now see topics or people covered in that podcast, allowing them to easily jump to Google Search to learn more. 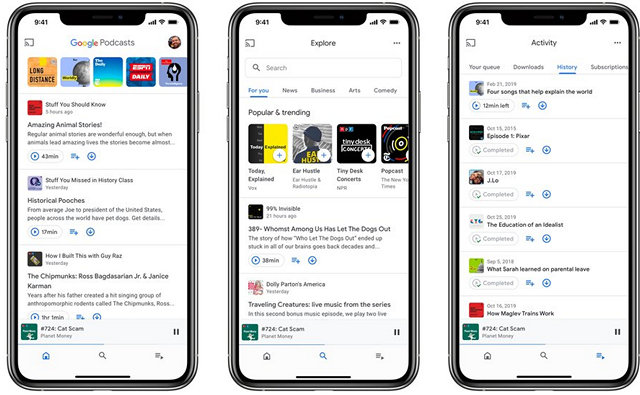 The Explore tab, meanwhile, comes with a “For you” section that displays new show and episode recommendations based on the user’s listening habits. It also enables users to browse popular podcasts in categories such as comedy, sports, and news. Users will also be able to control personalized recommendations from the Google Podcasts settings, which are accessible right from the Explore tab.

Last but not the least is the “Activity” tab that, as its name suggests, will display the users’ listening history, queued up episodes and downloads. Users can also enable automatic downloading and/or push notifications for each show in their subscriptions. The interface changes and new features are rolling out on Android and are also available on iOS.

How to Subscribe to Private RSS Feeds on Google Podcasts

How to Listen to Google Podcasts on the Web

How to Get the Google Podcasts App Before Its Official Release