Google Podcasts may be the tech giant’s podcast app of choice, but the company is reportedly developing an all-new piece of software for discovering and playing podcasts. Called ‘Shortwave’, the new app is apparently being developed by the Area 120 team, which is described by the tech giant as a ‘workshop for Google’s experimental products’.

The new software was revealed recently by a trademark filing that says it will “allow users to search, access, and play digital audio files, and to share links to audio files”. Although the trademark filing doesn’t specify the kind of audio, the app is understood to be focused on spoken content. 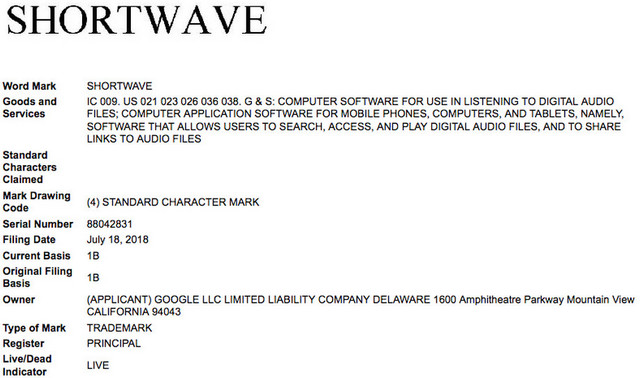 In an e-mailed reply to The Verge, Google reportedly said that Shortwave was “One of the many projects that we’re working on within Area 120 is Shortwave, which helps users discover and consume spoken-word audio in new ways. Like other projects within Area 120, it’s a very early experiment so there aren’t many details to share right now”.

It’s not immediately clear how exactly the new app will differ from Google Podcast, but the company it is definitely yet another example of the company coming up with multiple solutions for the same functionality.

One glaring example is the number of Messaging Apps offered by the company, including Allo, Android Messages, Hangouts etc., but the company now seems to be repeating history with podcasts, given that in addition to Google Podcasts, even the Google Play app offers podcast functionality.

With yet another podcast app now under development at Google, it will be interesting to see if it will fare any better than the abysmal 3.4 stars that Google Podcasts is currently rated at on the Play Store with just over a million downloads.