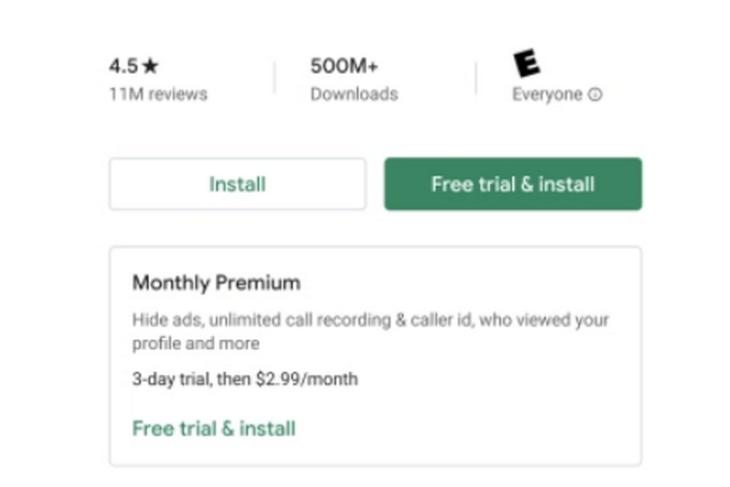 Google is apparently testing a new method that lets users directly subscribe to free app trials before installing an app from the Play Store. As pointed out by TechCrunch, there exists a new “Free trial & install” button right next to the usual “Install” button in select apps.

Google will show a neat box below the Install button that describes all you need to know about the subscription, such as the duration of the trial, cost after the trial period, and the extra features you get with the subscription.

It is worth keeping in mind that the new “Free trial & install” button is currently restricted to a limited set of app developers. Google has not revealed the entire list of supported apps so far but from the looks of it, TrueCaller is one of them.

The feature is part of Android Billing Library version 3 that lets users discover and purchase items outside the app. “Billing Library version 3 unlocks the ability for users to discover and purchase items outside of your app, such as across the Play store. One example is the new frictionless subscription promo code redemption experience,” says Steve Hartford, Product Manager, Google Play.

Hartford mentions that all new apps must use Billing Library version 3 or newer starting August 2, 2021. Developers should update existing apps to use the new library by November 1, 2021.

Also being added to Billing Library version 3 is the ability to pay by cash at a local convenience store. The feature will go live for one-time purchases with cash in Indonesia and Malaysia at over 50,000 locations.