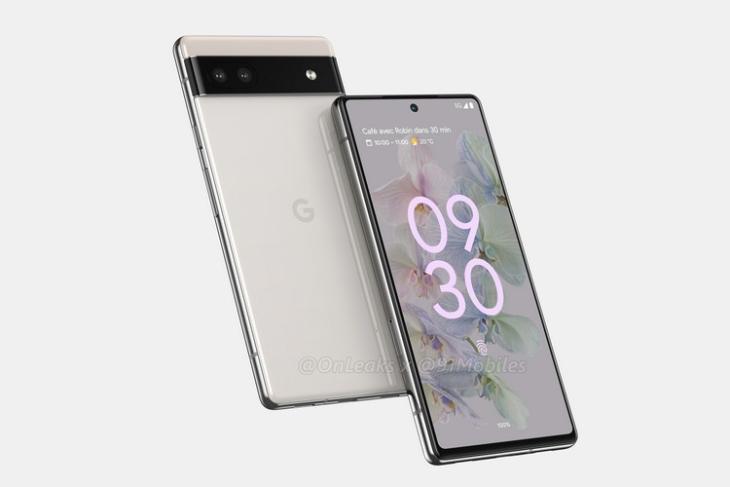 After teasing the Pixel 6 series earlier this year, Google finally launched the Pixel 6 and Pixel 6 Pro last month. Now, the Mountain View giant is reportedly looking to launch its budget-focused counterpart, presumably named the Pixel 6a, sometime in the next few weeks or months. The renders of the upcoming budget Pixel device already surfaced online last week. And today, we have some more information about the specs and camera setup of the Pixel 6a.

Now, for those unaware, high-quality renders of the Pixel 6a were revealed last week, thanks to Steve Hemmerstoffer aka OnLeaks (via 91Mobiles). As per the renders, the Pixel 6a will boast a 6.2-inch display with a top-center punch-hole cutout to house the selfie snapper and will be the first budget Pixel device without a 3.5mm audio jack.

At the back, the device will come with a horizontal camera bar, or what Google likes to call the “visor”, as the standard Pixel 6 and 6 Pro. You can check out a couple of Pixel 6a renders right below.

Downgraded Camera with a Flagship SoC

As per the report, the Google Pixel 6a will feature downgraded cameras as compared to the standard Pixel 6 and 6 Pro. Unlike the 50MP Samsung GN1 primary sensor on the Pixel 6 series, the Pixel 6a will reportedly feature a primary 12.2MP Sony IMX363 lens. This is the same lens that is present on various previous-gen Pixel devices, ranging from Pixel 3 to Pixel 5a.

Other than this, the device will also reportedly feature a 12MP Sony IMX386 lens as the ultra-wide sensor on the Pixel 6a. The front-facing selfie shooter will reportedly be the same 8MP IMX355 sensor as the standard Pixel 6.

Apart from uncovering information about the cameras of the Pixel 6a, the report also suggested that the Pixel 6a will feature the same Google Tensor GS101 chipset as its elder siblings. So, we can expect the Pixel 6a to support Tensor-backed features like Live HDR, on-device translations, and Google Assistant voice typing. So, this is good news for those looking to get Google’s flagship offerings in a budget-focused device like the Pixel 6a.