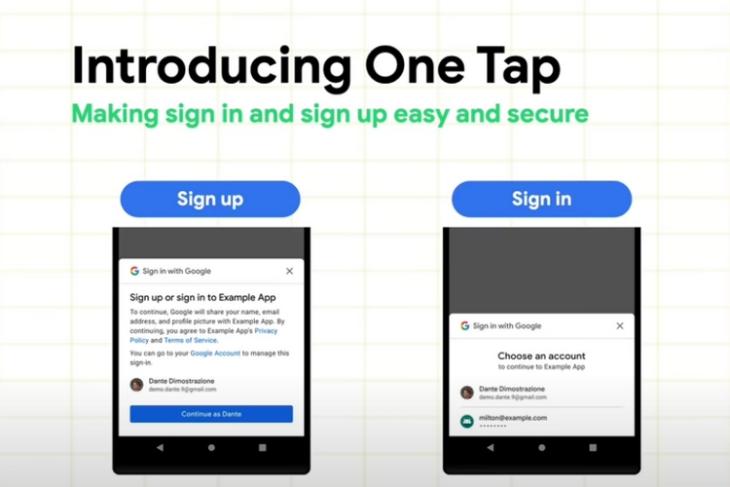 As part of the first week of “11 Weeks of Android” titled ‘People & Identity’, Google has shared the progress of its new Google Identity Services (GIS) Library. The noteworthy aspects of this library are One Tap and Block Store.

Google currently offers three solutions for signing in – Google Sign-In, Smart Lock for Passwords, and Android Autofill. As a step to deliver a seamless sign-in experience, Google is now offering One Tap – its cross-platform sign-in mechanism that supports both web and Android.

Originally announced for the web back in 2017, Google is gearing up to improve the adoption of One Tap in Android. With One Tap, users can seamlessly sign in to apps and services with a single tap through their Google account.

When users sign up with One Tap, Google will create a “secure, token-based, passwordless account” associated with the user’s Google account. The software giant will also provide users with the option to set separate password credentials.

Next up, there is Block Store – the company’s new token-based sign-in mechanism.  Block Store aims to reduce the friction when users sign in to new devices.

With Block Store, the app saves the user authentication token in an encrypted format locally on a device when the user signs in. This token will get synced to the cloud if the user has enabled cloud backup.

In the new device, when the user sets up and restores the apps via device-to-device or cloud restore, Block Store will retrieve and decrypt the tokens. As a result, users will not have to sign in to the app in the new device.