Skip to content
Home News Google Messages RCS Is Being Abused by Advertisers in India: Report 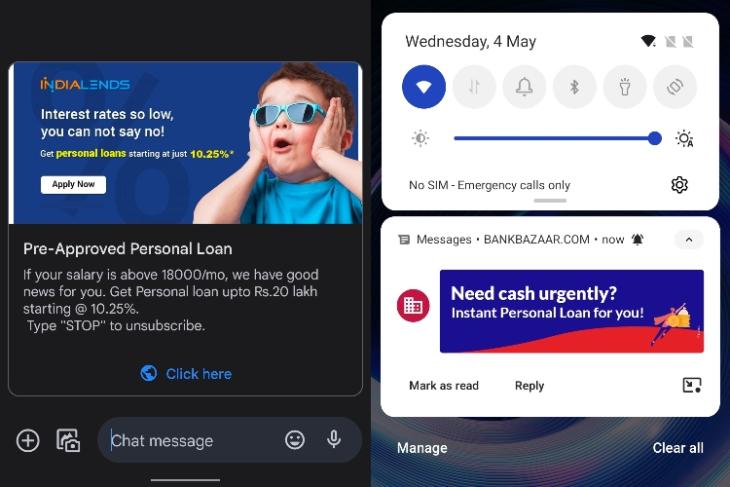 After working on the technology for many years, Google finally brought its rich communication services (RCS) messaging support for Google Messages in India back in 2019 to compete with the likes of WhatsApp and various other messaging platforms. Apart from hosting various features, the app is home to spam too. According to numerous user reports, the functionality is being abused by advertisers in India to deliver unwanted ads in huge volumes. Check out the details below to find out more!

According to a recent report by 9to5Google, citing Indian tipster Ishan Agarwal, many companies like Kotak Mahindra, Bajaj Finserv, PolicyBazaar, and more are abusing the Rich Communication Services (RCS) support in Google Messages to deliver a massive volume of rich media ads to Android users in India. The companies are sending out multiple ads, promoting their products and services, to Android users every day, which has frustrated many users in the country. You can check out Agarwal’s tweet attached right below.

These ads are not based on the users’ online shopping or buying activities. Instead, these random ads show up in their Google Messages app (a default messaging app on most Android phones), irrespective of their digital activities. Some users even reported that the ads are delivered to smartphones without an active SIM card.

According to Google, the RCS support for business messages is meant for businesses to send out copies of users’ travel tickets or send links for products to existing customers in Google Messages. However, Indian advertisers are seemingly using the functionality to bombard users with their adverts, which is clearly against what business messages should be like.

According to other reports, these unwanted advertisements in Google Messages have been going out for over a year in India. And over time, the frequency of the ads has only increased for Android users in the country.

If you have also seen these unwanted ads, there’s nothing major you can do other than reporting or blocking the businesses that are sending out the ads. Replying to Agarwal’s tweet, one Twitterati said that the “only solution” for it is to turn off RCS on Android. What are your thoughts on this? Let us know in the comments below.