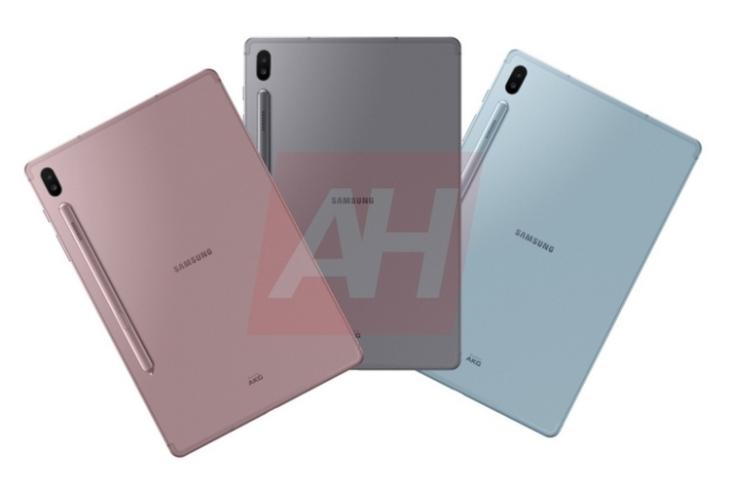 At its Galaxy Note 10 launch event in New York on August 7, Samsung will also reportedly launch its next-gen flagship tablet. That’s according to a new report from Android Headlines, which claims that the upcoming device will be named the Galaxy Tab S6 instead of Tab S5 so as to avoid confusion with the Tab S5e that was released last February.

The images published by the blog gives us a clean view of the Galaxy Tab S6 from all sides, confirming that there will be no 3.5mm headphone socket on the device. The report also confirms that the S Pen will, indeed, be housed within a groove on the back of the device, as rumored earlier.

As can be seen from the images, the stylus will stick out from the main body, although that might not be a bad thing, given that it will offer some protection to the camera lenses. The report also seems to confirm that the S Pen will be Bluetooth-enabled and, will also support wireless charging. “Arguably, the Bluetooth is likely to be the reason as to why the S Pen needs to be charged in the first place”, said the report.

The report also seemingly confirms some of the earlier leaks about the device, including a dual-camera setup on the back. It couldn’t, however, confirm whether one of those cameras will be a ToF sensor, as earlier reported. Instead, the report speculates that the second sensor might actually be paired with a wide-angle lens. If that’s the case, then the camera setup is likely to be a 13MP main sensor alongside a 5MP secondary sensor with a wide-angle lens.

Meanwhile, even though earlier reports claimed that the tablet will come with a fingerprint scanner, the report claims that there’s no evidence of that at this point in time. “That’s not to say one won’t be offered, just there’s no direct indication that’s the case”, clarified the report.