Skip to content
Home Reviews Samsung Galaxy A7 Camera Review: At Par With the Competition

Samsung recently launched the new Galaxy A7 (Rs. 23,990) in India, adding on to its line of premium mid-rangers in the country. The device packs in some impressive features, including a stunning 6-inch FHD+ Super AMOLED display, a triple camera setup and a (not entirely) new fingerprint sensor placement. The device is powered by Samsung’s Exynos 7885 SoC, coupled with 4/6GB RAM and 64/128GB of internal storage. 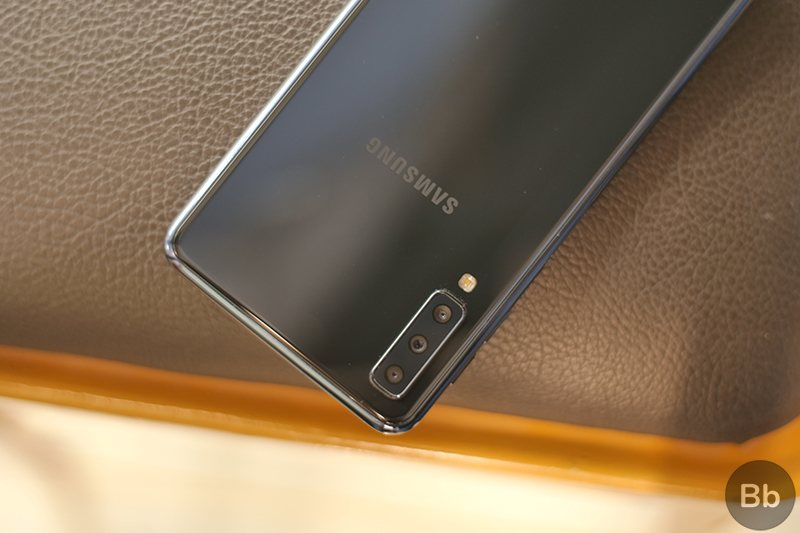 Before we go on any further into the camera review, lets take a closer look at the Samsung Galaxy A7’s camera specifications. The device’s primary triple camera setup houses a 24MP f/1.7 lens with PDAF, a 5MP f/2.2 lens for depth perception and an 8MP f/2.4 ultra-wide angle lens. Up front, the device houses a 24MP f/2.0 selfie shooter which is accompanied by a front facing flash. Samsung has also included a number of software features for the camera, along with an AI-based Scene Optimizer, Live Focus or portrait mode with some cool new effects, and a very basic pro mode.

The Galaxy A7’s primary triple camera setup is quite capable when it comes to capturing images in good lighting conditions. The images turn out quite sharp, with an ample amount of detail and good dynamic range. The device tends to lean a bit towards warmer tones, which really makes some colors pop, but might not appeal to users who prefer cooler tones. Here are a couple of sample images clicked using the Galaxy A7 in good lighting conditions:

In low-light conditions, the camera on the Galaxy A7 makes use of Samsung’s SuperPixel technology which combines four adjoining pixels to make a SuperPixel that captures more light. While the technology does help make the images look a bit brighter, there’s some loss of detail since the resulting picture has 1/4th the resolution of the sensor. Color saturation remains pretty decent, even in low-light conditions, but the camera does sacrifice a bit on the dynamic range. Take a look at some of the low-light samples we captured using the Galaxy A7:

The secondary 5MP lens on the Galaxy A7 is dedicated to depth perception and it does a fairly decent job. While clicking images in the Live Focus mode, the Galaxy A7 allows users to adjust the background blur and in case it still looks a bit off you can also adjust it later in the gallery. Portrait mode images captured by the Galaxy A7 are pretty decent overall, there’s good subject separation and a decent background blur. The edge detection is also on point, for the most part, but the device does struggle a bit while capturing low light portrait shots. The included portrait effects, especially the portrait dolly effect, are pretty great as well and give a unique twist to portrait images captured using the device. Here are a few portrait mode samples captured using the Galaxy A7:

Up front, the Galaxy A7’s 24MP f/2.0 selfie shooter is capable of taking some great shots. In good lighting conditions, the selfie camera works really well, capturing ample amounts of detail, good dynamic range, and decent color accuracy. In low-light conditions, once again, the Galaxy A7 doesn’t perform as well. Samsung has also included a front facing portrait mode, which works quite well more often than not but tends to slightly smooth out the details when used. The first image in our samples clearly highlights this issue.

Due to its price tag, the Galaxy A7 competes directly with the Poco F1 from Xiaomi and the Vivo V11 Pro, both of which are pretty great performers in the camera department.

While both the Poco F1 and the Vivo V11 Pro are able to outperform the Galaxy A7 in most scenarios, I personally prefer the Galaxy A7’s camera while clicking images in good lighting conditions, mostly because the images aren’t too over saturated. Here are a few samples we used for comparison:

In low-light conditions, the Galaxy A7 performs marginally better than the Poco F1, as it’s able to capture more light. However, if we only lay emphasis on the details, then the Vivo V11 Pro is the clear winner. Portrait mode capabilities of the Galaxy A7 are at par with the Vivo V11 Pro and are slightly better than that of the Poco F1, only because of the versatile software implementation that allows users to adjust portrait shots later. Check out these sample images and see for yourself:

The front facing selfie shooter on the Galaxy A7 also performs quite well, delivering high-quality images both with and without portrait mode turned on. Compared to the Vivo V11 Pro and the Poco F1, I believe it will boil down to personal preference, because the image quality delivered by the Galaxy A7 is almost the same, with the color temperature being the main differentiating factor. Just take a look at these samples below:

Samsung Galaxy A7 Camera Review: Good, But Not the Best

In conclusion, the Galaxy A7’s triple camera setup is pretty great and it delivers some stunning images in almost all scenarios. The only shortcoming on the Galaxy A7 is its lack of stabilization and support for 4K video. Images captured by the Galaxy A7 are a bit on the warmer side, which might not appeal to some, but they’re definitely not as over-saturated as the ones captured by the Vivo V11 Pro. All-in-all, if you’re in the market for a premium-mid range device that offers a couple of unique features in the camera department, like the wide angle lens and cool portrait mode effects, then the Galaxy A7 should be right up your alley. However, the Poco F1 does pose a stiff competition to the device, especially when the overall performance is taken into consideration.