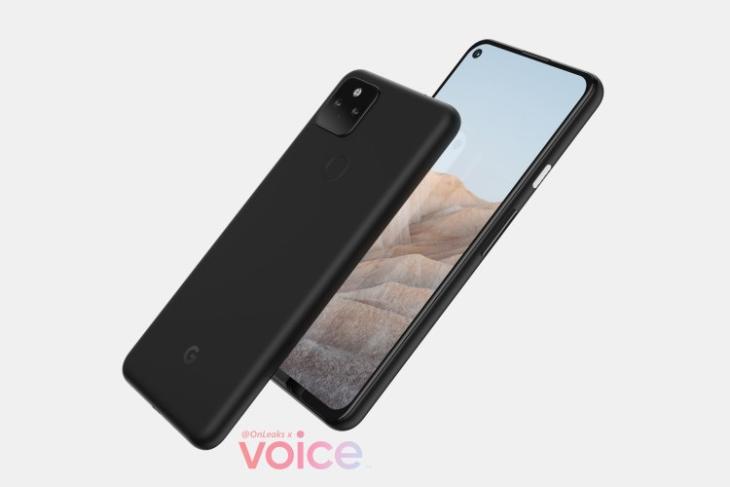 Merely five months after the Pixel 4a 5G launch, we have today got our first look at its possible successor. The Pixel 5a renders have surfaced online and the upcoming device looks awfully similar to its predecessor. Is Google rushing its mid-range Pixel lineup by peddling the same design and changing just the internals? Let’s find out.

The Pixel 5a renders have been shared by reputable and reliable tipster @OnLeaks on Voice. The device appears to be a repurposed Pixel 4a 5G to make it a possible Pixel 4a successor instead of its 5G variant.

OnLeaks reveals that the upcoming Pixel 5a will measure 156.2 x 73.2 x 8.8mm and it looks almost identical to the Pixel 4a 5G. It looks like the device will be a wee bit taller and thicker. You will find a 6.2-inch Full-HD+ OLED display with a punch-hole cutout at the top left. The rear will include a fingerprint sensor, a bigger square camera setup with two sensors and the flash – the same as Pixel 4a 5G. It is bigger in comparison to the vanilla Pixel 4a, and also an upgrade.

Moreover, since it is a mid-range Pixel smartphone, the Pixel 5a will feature a plastic unibody construction as compared to a metallic body. Can you catch any differences between the Pixel 4a 5G and Pixel 5a in the image attached above? We don’t see any significant upgrades here. You will also find a USB Type-C charging port and 3.5mm headphone jack onboard. Yeah, that’s essential for a mid-range Pixel.

Now, we currently have no information about what chipset will power the upcoming mid-range Pixel. Will it feature 5G connectivity or not? All of these questions will be answered when Pixel 5a goes official, probably at Google I/O 2021 sometime in May. The device looks really underwhelming though. So yeah, it will be interesting to see if there’s enough demand for this mid-range smartphone that’s a one-trick pony.