Skip to content
Home Internet Firefox Quantum Beta Just Landed: Is It The Fastest Browser Ever?

Last October Mozilla announced its Project Quantum, which was its effort to revamp its Firefox browser by changing the underlying engine to make it faster and better. Yesterday, Mozilla released the Beta version of its Firefox browser for the public, and I am happily excited about the things that have changed. Firefox 57 is the browser’s biggest update in years. According to Mozilla since the changes are so significant, Firefox 57 is also being dubbed as Firefox Quantum Beta update to reflect the same. The whole interface has received a facelift, the legacy add-ons are being dropped, memory management has improved, and the browser is getting a huge speed boost. In this article, we will take a look at what all have changed, and help you decide if the update is worth your time or not.

Before we take a look at what all is new in the new Firefox Quantum beta, first let’s get the installation process out of the way. If you are already using the Firefox browser, you will automatically receive the update notification on November 14, as that’s when the final public version will hit the market. However, if you want to check out the browser right now, you can download the beta version by clicking on the link.

As I mentioned earlier, the Quantum update is a major upgrade for the Firefox browser. The underlying engine of the browser has been completely reinvented. Major parts of the browser have been rewritten using ”Rust”, which was developed by Mozilla itself with the sole purpose of improving the Firefox browser. For creating the new version of Firefox which is both speedier and more efficient, Mozilla also developed its own CSS engine, (Stylo) along with a new rendering engine (WebRender), the compositor, and the Quantum Dom. I know, I know, you don’t care about this technical mumbo-jumbo, and we will get into the changes that we as a user can see and appreciate, however, I just want you to know, how hard Mozilla has been working to make the Firefox browser better. That being said, let’s get into the exciting stuff, and see what all has changed on the surface.

Firefox Quantum is supposed to be considerably faster than the older versions of the Firefox. Mozilla went as far as saying that the new version has twice the speed of the older version. If you like benchmarks and numbers, you can run the Speedometer 2.0 benchmark on both the versions of Firefox, and the numbers will support Mozilla’s statement. However, if you are more in favour of the day-to-day performance, you will be happy to know that the websites do seem to load faster. I tested this by loading the same websites on both the versions (on the same system using the same network), and indeed the new version loaded the websites considerably faster. 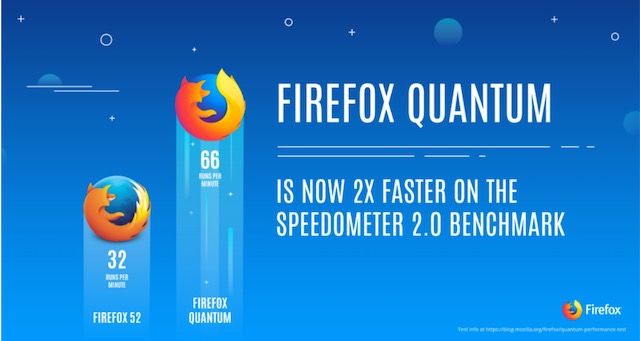 Mozilla has also posted a video where they have compared the Firefox Quantum with Chrome and Firefox seems to hold its own ground, even outpacing the Chrome on some websites. As always, the results will depend on the website you are loading. However, my own testing also supports Mozilla’s claim. The Firefox browser does seem to load some of the websites faster than the Chrome, but then again Chrome loads websites faster on other occasions. It really depends on the website that you are trying to load. Still, it’s good to see, Firefox catching up with Chrome after so many years.

While under the hood changes are great, it won’t amount to much if users can’t feel it on the surface. The perceived speed with which a website loads is as important as the actual speed. Also, the browser should display the controls in as user-friendly way as possible, and it should do all this while looking good. To ensure that all these desires are achieved, with the Project Quantum, Mozilla also launched the “Project Photon”. Project Photon basically is a small part of the Project Quantum, and it has everything to do with the user experience and user interface of the browser.

Project Photon is bringing a lot of changes to Firefox’s UI and UX. Probably the most welcomed and the visible change is the return of the square-shaped tab design. The curvy tabs design was introduced sometime in 2014 and I have hated the change since then. I prefer the square tabs as apart from looking good, they also give the browser a cleaner and organised look. However, your opinion might differ. The new tab like before shows all your most frequent website, but somehow it looks cleaner than before. The animations are also a little smoother, which makes tasks like opening or closing tabs feel quicker. 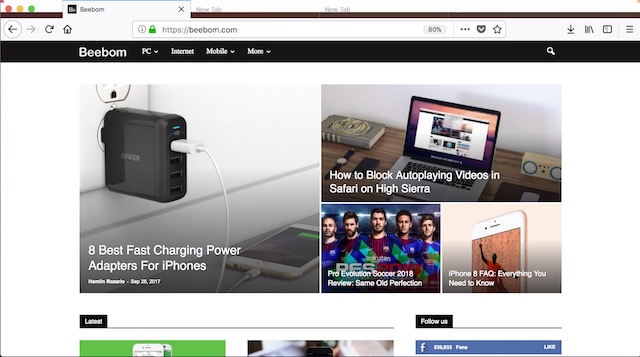 Apart from this, there are a lot more device specific changes that are coming too. For example, Firefox will be intelligent enough to know if you are using a mouse click or a touch input and dynamically change the size of the menu buttons to facilitate a better experience. However, I couldn’t confirm this change as I am testing the Firefox Quantum on a Mac and as you all know, Mac’s don’t support touch-screen. Still, I like what I see here, and hope that this will improve further when we see the final release.

While a more refined look together with the enhanced performance already makes this version of Firefox a success in my books, I also really love some small changes that Firefox has included with this build. For one, now, Pocket comes built-in with Mozilla, which is really not a surprise seeing it was acquired by Mozilla last year. If for some reason you don’t know what Pocket is, it is basically a read-it-later service which allows you to save articles offline and read it later. I am an avid user of Pocket and love this integration. 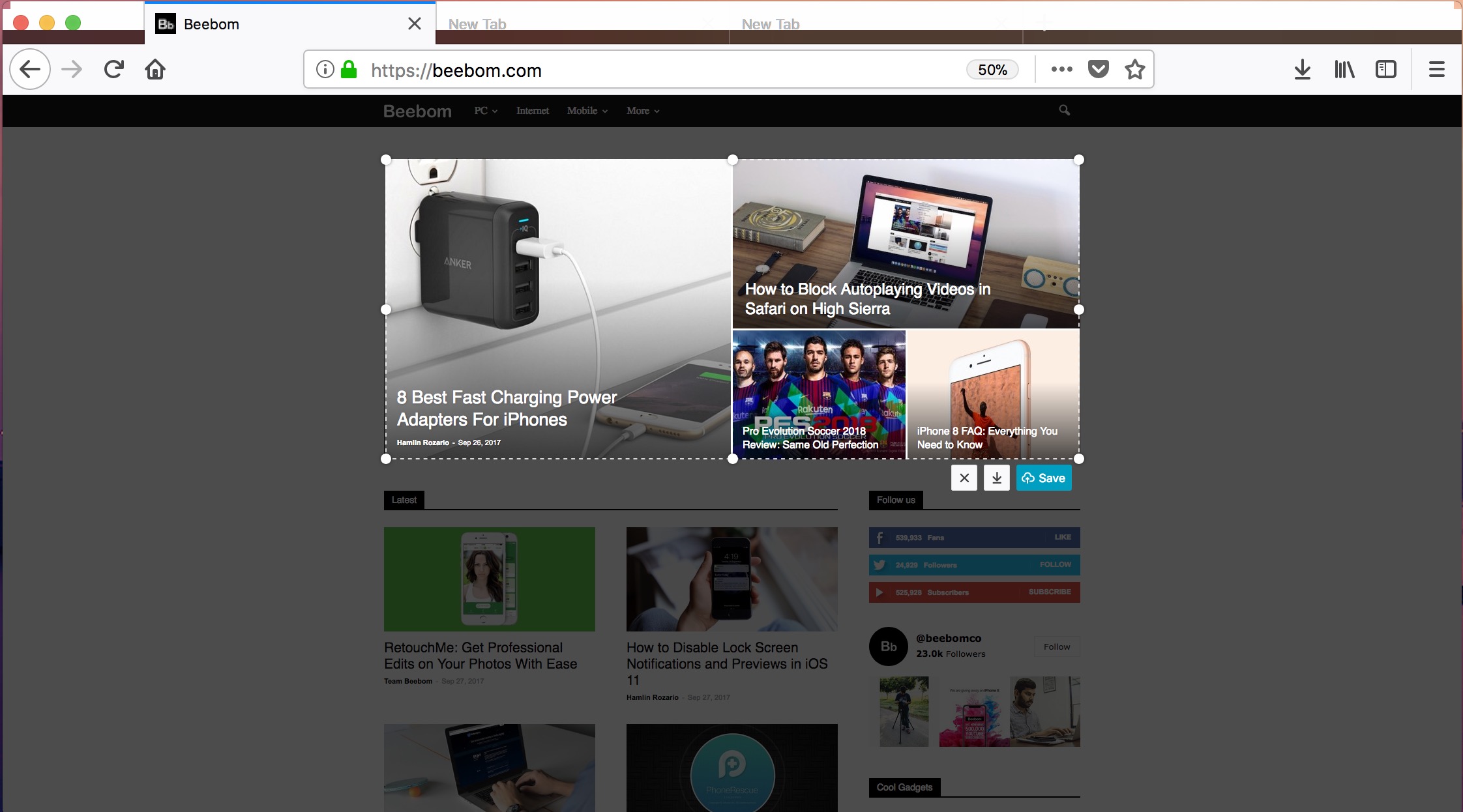 There’s also the built-in screenshot tool, which allows you to take screenshots inside Firefox without ever leaving the browser or using a third-party tool. The best part is that all these tools are built right in the address bar, letting you easily access them. Apart from letting you take a screenshot the drop-down tool menu also allows you to quickly copy links, email links, and send tabs to other devices. The toolbar present on the top-right corner has also become highly customisable. Now, you can easily drag and drop icons to change their order. These subtle changes have really improved the Firefox’s user experience for me. 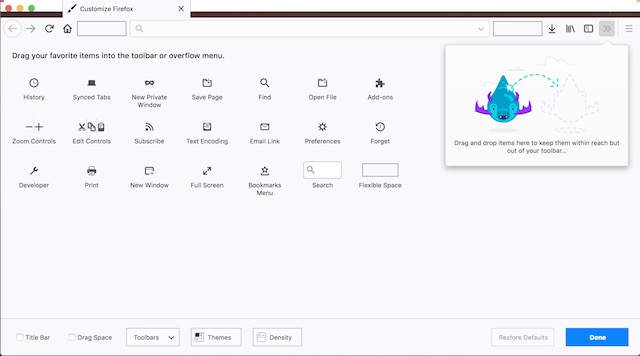 Firefox Quantum Beta: Is It The Fastest Browser Ever?

To answer the question with which we started, Firefox Quantum (Firefox 57) is a humongous update over its previous versions. The browser overall feels much faster and has improved UI and UX. However, it would be wrong to deem it the fastest browser as the real-world performance shows that Chrome beats Firefox while loading some websites and vice versa. However, still, it’s incredible to see Firefox going head to head with Chrome. While, till now, Chrome was sitting at the top without any major challenge, with its Quantum update, Firefox has just taken a great leap. It has now become more of a personal choice as to which browser you prefer as the gaps between both the browsers are closing rapidly.

As mentioned earlier, the final and stable version supporting the Firefox Quantum update will be released on November 14. If you are an existing Firefox user, you will get the update automatically. Those, who want to check it out right now can download the beta version by heading to this link.

SEE ALSO: How to Use Firefox Send to Send Self-Destructing Files

I am loving the new Firefox Quantum Beta, and I would urge you guys to check it out for yourself. There’s a lot to like here. I don’t think it will make Chrome users switch to Firefox entirely, however, it can act as a great secondary browser for them, and who knows even replace Chrome in a couple of months. Those who are primarily Firefox users are going to love this update. It brings a lot of performance and UI/UX improvements which I think they will love. But, don’t take my word for it, download and use the Beta version and let us know your thoughts in the comments section below.