Firefox 57, which is scheduled for release this November, will bring some pretty big changes to the browser, including one that might, potentially, break compatibility with some popular add-ons that many of us find indispensable in our day-to-day usage. With Mozilla moving away from XPCOM and XUL, the foundations of Firefox’s thriving add-ons eco-system, the browser will only support a new extension API called ‘WebExtensions’, ending compatibility with XUL overlay extensions, bootstrapped extensions, SDK extensions and even Embedded WebExtensions. As a dedicated Firefox user ever since its Netscape Navigator days back in the mid-nineties, the idea that some of my beloved add-ons may become obsolete in a matter of weeks is a bitter pill to swallow, but there are workarounds that you can use to buy yourself some time before they become outdated. In this article today, we’ll tell you exactly why Mozilla is deprecating XUL extensions, how you can check add-on compatibility with Firefox 57, and how you can keep using legacy extensions even after Firefox 57 ends support for the XUL and XPCOM for good.

Why is Mozilla Ending Support for XUL With Firefox 57?

According to statements released earlier this year by Mozilla, implementing the WebExtensions API will help Firefox in a lot of ways, although, many in the developer and power-user communities are not convinced. First-off, according to Ken Needham, Mozilla’s Firefox desktop manager, the primary reason the browser is abandoning XPCOM and XUL is security and stability. According to him, the fact that much of the Firefox code is in JavaScript has been a huge advantage for the browser in terms of making it much more customizable than any of its competitors, but it also makes the browser inherently insecure from malware and other security threats. He  further said, “Add-ons have complete access to Firefox’s internal implementation. This lack of modularity leads to many problems. Add-ons can also cause Firefox to crash when they use APIs in unexpected ways”.

WebExtensions, the new application programming interface (API) that Firefox has already adopted and will be the sole basis for its add-ons from Firefox 57, is also compatible with Blink, which is Google’s fork of Apple’s open source WebKit browser engine that’s currently used by Safari and forms the basis of other popular browsers, such as Chrome and Opera, with the latter abandoning its Presto browser engine in favour of WebKit a while back. The Blink-compatibility will allow developers to easily port their Chrome add-ons to Firefox without having to change the code too much, which is yet another reason for the shift, according to Mozilla. So whether you like it or not, you’ll have to deal with this change.

Check Which Add-ons Are Compatible with Firefox 57 or Later 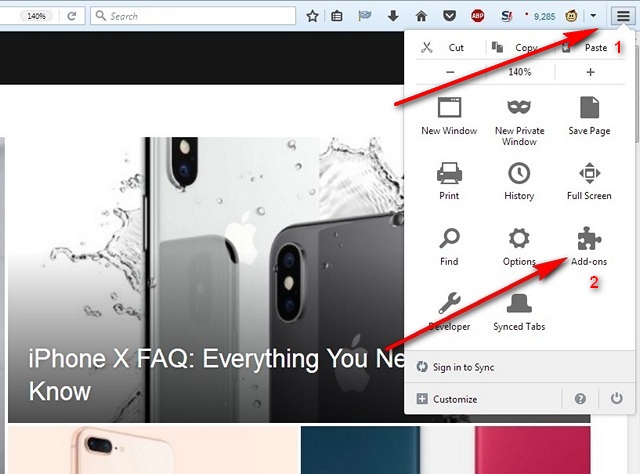 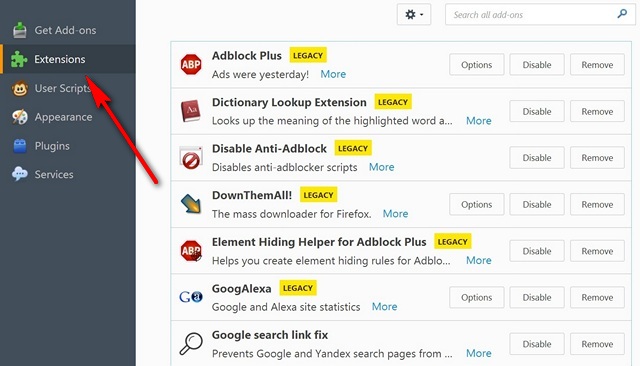 Now you can see XUL and other extensions labelled with a yellow ‘Legacy’ tag, while the ones that have already migrated over to the WebExtension API will have no such marking and, will continue to work as usual even with Firefox 57 and later.

How to Keep Using Legacy Extensions

If you really want to keep using a particular extension whose developer hasn’t yet migrated over to WebExtensions or is unlikely to do so in the future, what you can do is switch over to Firefox ESR (Extended Support Release), which is largely aimed at organizations and enterprises that value compatibility over features. ESR releases may not get updated with new features, but they do continue to receive all security patches until the release of the next ESR version. The current ESR release is Firefox 52, and it will continue to receive security updates until next June, so you can continue using your legacy extensions till then without any concerns about security. It won’t be a permanent solution, but will buy you some time to evaluate your options going forward.

SEE ALSO: How to Use Firefox Send to Send Self-Destructing Files

While Firefox’s move has attracted a large number of vocal and influential critics, the organization is still going ahead with the proposed changes as planned. So whether you like it or not, at least some of your favorite add-ons may not be usable any more by the end of this year. Sure, you can shift to the ESR version, but you’ll still be living on borrowed time, because the respite is only going to be temporary and not permanent. So do you think the changes will alienate developers and users? Will Firefox lose a chunk of its users, or do you believe die-hard Firefox users will continue to support the browser if only for ideological reasons? Do let us know what you think about the issue, because we love hearing from you.

Firefox Quantum Beta Just Landed: Is It The Fastest Browser Ever?