Skip to content
Home Internet Extract Vocals and Audio from Music with LALAL.AI

Have you ever wanted to host a karaoke party at your home only to find out it’s extremely difficult to find instrumental versions of the songs you and your friends like? Or maybe you’re looking for the vocals and instrumentals individually for a project or anything else for that matter. Either way, you need a software that can split your audio files into music and vocal stems, and that’s where LALAL.AI comes in clutch.

We have discussed LALAL.AI before, back when it was using its Rocknet algorithm to do the job. Back then, we were quite impressed by the results, but LALAL.AI has now unveiled a brand new algorithm – Cassiopeia – which basically improves upon every aspect of Rocknet even further.

How is Cassiopeia Different from Rocknet

So what’s the reason behind Cassiopeia being so much better than Rocknet? LALAL.AI has trained the new Cassiopeia algorithm to be a generational leap over Rocknet. What’s more, Cassiopeia comes with a completely new architecture and more advanced capabilities. All of which mean that the new algorithm is a lot better than its predecessor with better results in splitting, and a lower number of audio artifacts and unnatural sounds.

In fact, Cassiopeia is better than its competitors as well, including in comparisons made on Source-to-Distortion Ration (SDR), Source-to-Interference Ration (SIR), and Source-to-Artefact Ratio (SAR) metrics.

To test just how good Cassiopeia is, LALAL.AI did a couple of tests with competitors like Spleeter, OpenUnmix, and Extended Unmix and found that Cassiopeia performs better than the competition in almost every category and genre of music.

Rocknet still manages to outperform Cassiopeia when it comes to splitting the vocals, though. Audio files split using Cassipeia had more interference from the instrumental stem as compared to those split from Rocknet.

I’m not discussing the complete results of all the tests performed by the team at LALAL.AI, however, if you’re interested in more details and some interesting graphs about Cassiopeia’s performance against competitors like OpenUnmix and Spleeter, you can check out LALAL.AI’s blog post here.

How to Use Cassiopeia for Splitting Your Audio Files

Now that we have discussed the basics of what LALAL.AI is, and how its new Cassiopeia algorithm is better than the older Rocknet algorithm, you may be wondering how you can use it.

Just go to the LALAL.AI website, and ensure that the checkbox that says ‘use new algorithm’ is enabled. This will make sure that the service uses the new Cassiopeia algorithm to split the audio file. You can then simply upload an audio file to the website, and it will split it into two parts – vocals and instrumental. 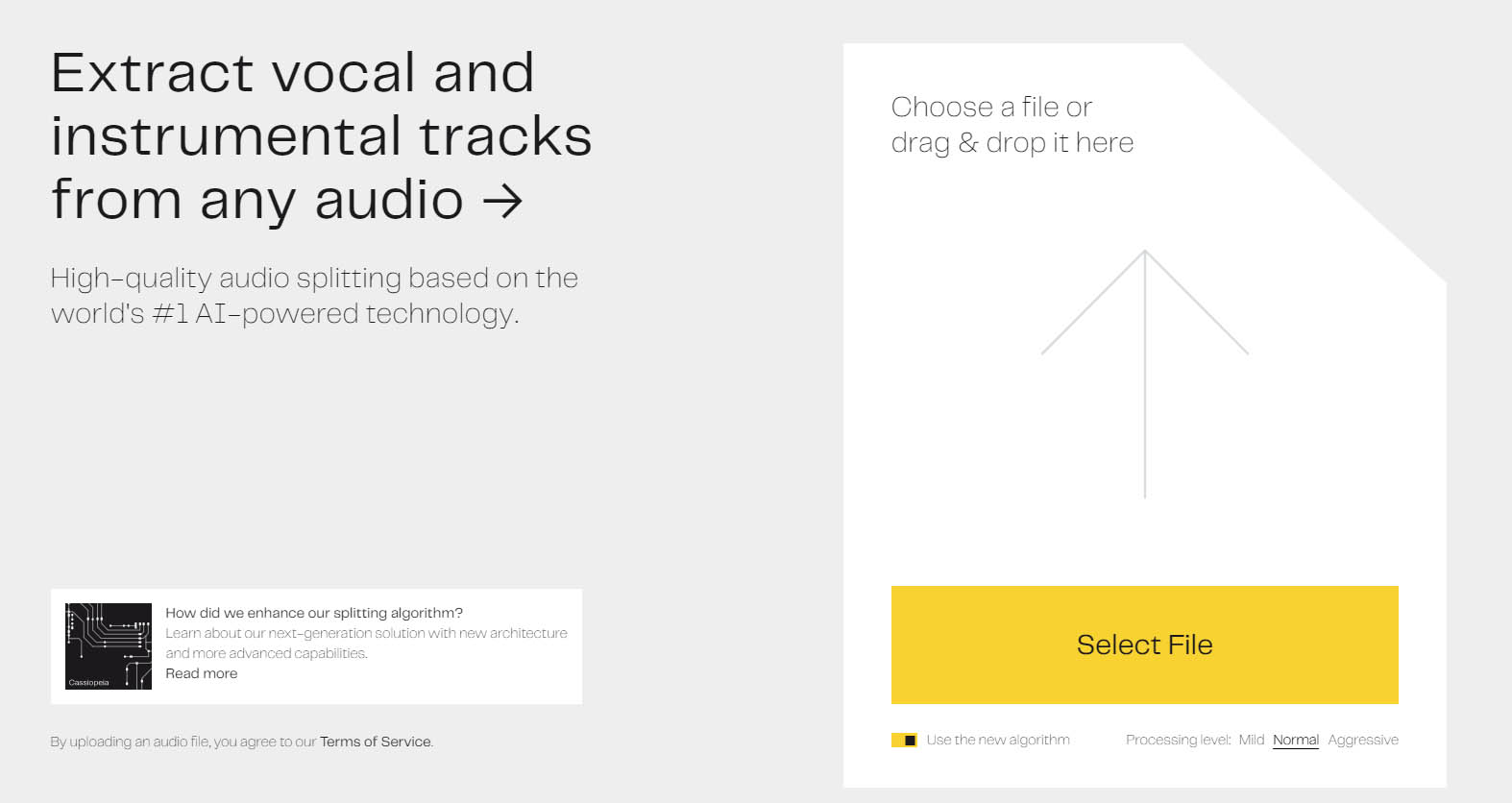 You can use LALAL.AI for free, but in that case, you will be limited to three tracks and a total of 10 minutes. If you need more than that, you can check out one of the paid subscription plans from LALAL.AI.

We have used LALAL.AI’s older Rocknet algorithm and the results were quite good, so obviously this new algorithm with a brand new architecture is even more exciting. It works quite well, and the separation of vocals and instruments from a song is done quite well with the new Cassiopeia algorithm.

As I mentioned above, you can use the new algorithm by visiting the LALAL.AI website and uploading the audio file you want to split. Let us know how it turns out for you in the comments down below.