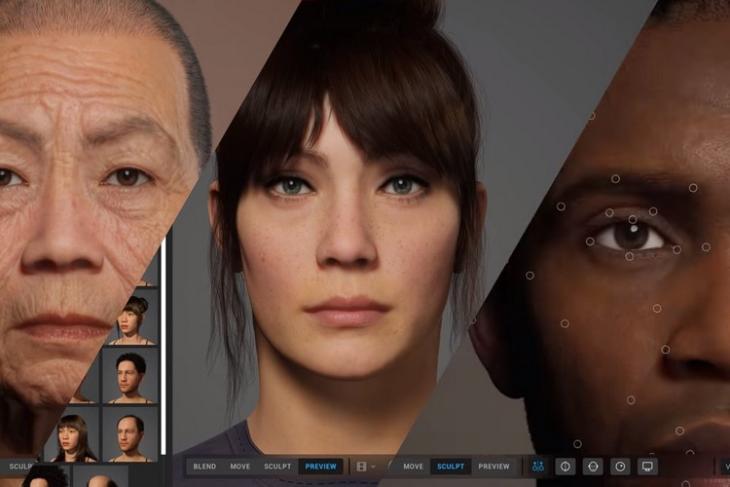 As we move towards a digital future, we’re seeing technology giants develop tools and hardware to bring digital humans into the real world. We have seen Samsung’s Project NEON that aims to introduce AI-powered humans to the real world. Now, Epic Games has created a unique browser-based tool to help users create, what they are calling as, MetaHumans.

The developers of the popular battle royale title Fortnite recently announced a unique tool that can help users create life-like human faces with ultra-realistic movements and facial expressions right within their web browsers. The software dubbed “MetaHuman Creator” is essentially an advanced tool that can render life-like human faces, and lets users manipulate various features of the faces to use them with modern motion capture and animation techniques.

As per the company, users could generate the MetaHumans right in their web browsers in a matter of minutes. They come with exclusive hairstyles and clothing, and the tool lets users adjust various other factors to help them create a perfect digital being for their projects.

Now, as you can imagine, Epic’s MetaHuman Creator is powered by its powerful game development engine, the Unreal Engine, and this enables the tool to generate highly-detailed human faces. As a result, with the said tool, users will be able to manipulate the faces and see the changes happen in real-time. You can check out the graphics right here:

“Up until now one of the most arduous tasks in 3D content creation has been constructing truly convincing digital humans. Even the most experienced artists require significant amounts of time, effort, and equipment, just for one character. After decades of research and development, and thanks to bringing companies like 3Lateral, Cubic Motion, and Quixel into the Epic family, that barrier is being erased through Unreal Engine, and we’re thrilled to introduce MetaHuman Creator,” said Vladimir Mastilovic, the VP of Epic Games’ Digital Humans Technology.

In the video attached above, Epic has shown off how users can use the tool’s advanced options to craft high-fidelity digital humans easily. In another promo video, we can see two of the “metahumans” talk about how they were created, and how they can be used.

A version of the MetaHuman Creator which features two digital humans is currently available for free on the company’s Games Store. It is still unclear, however, when Epic plans to release the tool to a wider audience. Nonetheless, developers or artists who want to try out the full capabilities of the tool can register themselves for updates on the Unreal Engine website right here.