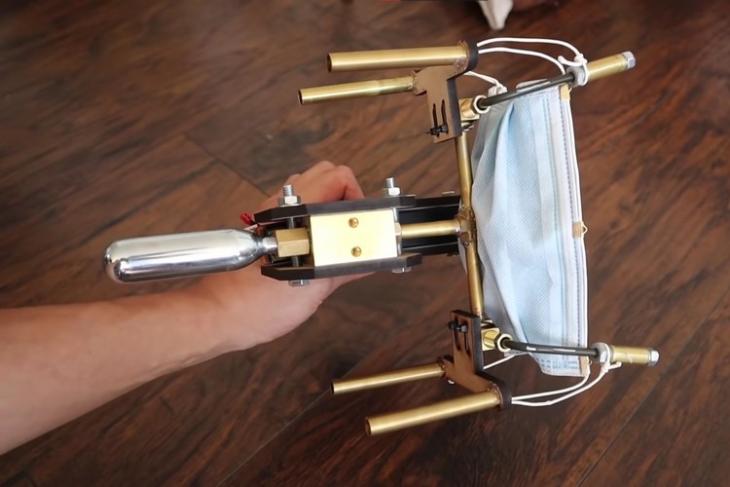 Apart from locking us all up in our houses, the ongoing Coronavirus pandemic has also forced us to wear a face mask. However, for some people in the world, especially for a certain percentage of Americans, wearing a mask is against their free will. In light of this idea, there have been a lot of protests against wearing a mask. So, to cover the faces of these “maskholes”, an engineer turned YouTuber has built a “Mask Gun”.

We have seen YouTubers do all sorts of crazy things like building a “Cyberbike” and opening over 6000 tabs on Google Chrome. However, a gun that throws a mask on others’ faces is first for us.

Allen Pan, an electrical engineer from the University of Southern California and a popular DIY artist on YouTube thinks that the “maskholes” who are protesting against wearing a mask should get a taste of his creation. His creation? a DIY gun/launcher that actually throws a face mask towards you which automatically wraps around the face. Pan is calling it the “Mask Gun”.

The YouTuber took some daily-use items, used his talent, and put together a device to shut those non-mask-wearers in his area. He used a brake line, an 800 PSI CO2 canister, a solenoid valve, a paint pistol grip, and some magnetic projectiles fitted in the surgical masks to develop his “Mask Gun”. He also put a laser projector at the front of the gun to ease the aiming process.

You can check out the full video of him putting together all the components right below.

Now, after finishing building the gun/launcher, Pan tested it out on some mannequins and then on himself. And after some successful results (well, sorta), he took it to the “Huntington’s Beach” where all the protests against wearing a mask were being carried out.

However, when he reached the beach, Pan found out that most of the people are wearing a mask. Nonetheless, he decided to test out the gun with some focus groups enjoying on the beach.

Now, I understand that throwing a mask right at your face is pretty rude and never safe. However, if you are someone who isn’t wearing a mask during this ongoing crisis, then I am afraid to say that you totally deserve it!