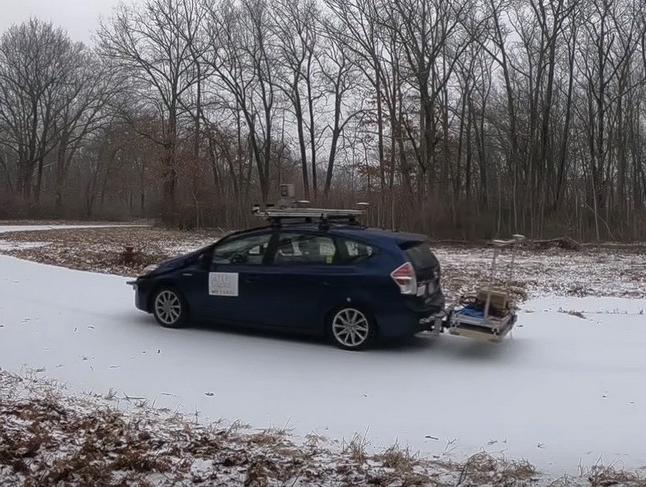 Despite all the advanced tech packed in most self-driving cars, bad weather, snow-covered roads and dense fog can still throw these cars off the road. Well, with the new GPR tech, these autonomous cars would be able to “see” through the snow or the fog.

Conventionally, almost all of these autonomous cars use Light Detection and Ranging (LIDAR) sensors and cameras to monitor the roads, road signs and lane lines. If there are inches of snow covering the road or the road signs, or if there is dense fog ahead on the road, the cameras and the LIDAR sensors might not work properly. This raises safety concerns as the cars depend on these cameras and sensors to maintain stability on the roads.

To solve this problem and end the full dependency on LIDAR and camera sensors, a team from the Computer Science and Artificial Intelligence Lab (CSAIL) of MIT has developed GPR. The Ground Penetrating Radar is a system that uses electromagnetic pulses to analyse the roads. The device sends an electromagnetic pulse through the fog or snow to measure the combination of the soil and rocks. The vehicle then uses this data to map the road ahead.

The radar uses a technology called the Localizing Ground Penetrating Radar (LGPR). The LGPR works by quantifying the specific elements under the ground. The device works even if the road is heavily covered with snow or there is dense fog ahead.

For starters, the CSAIL team have already tested the radar on a low-speed self-driving car. It was on a closed country road with heavy snow on the ground. According to the team, the system has a lot to go through before it is deployed in the real world. It still cannot work properly in rainy conditions, especially when the water seeps through the ground.

The team is working hard to make the hardware smaller, as currently the device itself is almost 2 metres wide. They are also planning to improve the LGPR technology to work in any weather conditions.

LG and HERE Working Together on Autonomous Cars