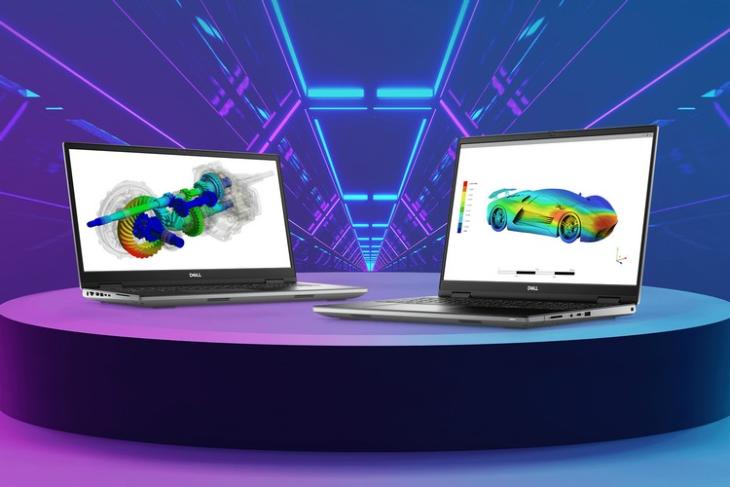 Citing the ever-increasing need for hybrid and work-from-home work cultures, Dell has launched three new laptops under its Latitude and Precision series. The new Latitude 9330 and the Precision 7000-series laptops come with various advanced specs and features, including a new collaboration touchpad, a patented RAM technology, and 12th Gen Intel CPUs. Check out the details below.

Starting with the Dell Latitude 9330, the laptop comes with a 2-in-1 form factor and a 13.3-inch QHD+ touch-enabled display with a 16:10 aspect ratio and a 90% screen-to-body ratio. It has an always-on Comfort View Plus technology to shield users from harmful blue light, supports 100% sRGB color gamut, and stylus. There is also an FHD IR camera at the front for high-quality video calls.

Under the hood, the Latitude 9330 can pack up to Intel’s 12th-Gen i7 processor with Intel vPro and Intel Iris Xe graphics. The processor is paired with up to 32GB of LPDDR5 5200MHz RAM and up to 1TB of M.2 SSD. There is also a 50Whr battery with support for ExpressCharge 2.0 fast charging technology.

As for the ports, there are 2 Thunderbolt 4 ports with support for Power Delivery and DisplayPort, a USB-C Gen 2 port, and a 3.5mm audio jack. For wireless communications, the Latitude 9330 supports Wi-Fi 6E and Bluetooth version 5.2 technologies.

Another highlighting feature of the new Dell Latitude laptop is the collaboration touchpad. It is a specialized trackpad that offers dedicated touch buttons to mute/unmute the mic, turn the video on/off, screen share, and chat during video calls. These buttons appear when users start a video call and disappear when the video call ends.

The Latitude 9330 runs Windows 11 home out-of-the-box. It weighs 1.2Kgs and is the thinnest laptop under Dell’s Latitude 9000 series, as per the company. It also comes with features like Dell Optimizer and various privacy features too.

Under the hood, both the new Precision laptops can pack up to Intel 12th-Gen Core i9 processors with Intel vPro. They can also support Nvidia’s 16GB RTX A5500 GPU and up to 128GB of DDR5 RAM. That said, Dell has also used a new patented CAMM (Compression Attached Memory Module) for its latest Precision laptops. This enabled the company to develop a thinner chassis for the laptops without compromising on performance. The CAMM module also enables easier field repair opportunities for users.

Other than these, the Precision 7000 series comes with advanced security features to prevent any unauthorized individual to tamper with the devices. These include chassis intrusion detection, battery removal detection, traditional and FIPS-certified fingerprint scanner, and an IR camera at the front for login security with Windows Hello face unlock.

As for the ports, the Precision 7670 and the 7770 feature 2 Thunderbolt 4 ports, a USB-C port, 2 USB-A ports (including one with PowerShare), an HDMI 2.1 port, an ethernet port, and a 3.5mm audio jack. For wireless comms, the laptops support Wi-Fi 6E and Bluetooth version 5.2 technologies, and they run Windows 11 Home, Professional, or Enterprise.

Now, coming to the prices of the new Dell Latitude and Precision laptops, the company has not announced them yet. It says that the pricing of the new laptops will be confirmed ahead of their shipping dates.

As for the availability, the Dell Latitude 9330 will be available worldwide in June 2022, while the Precision 7000 series will be available sometime during the second quarter of the year. So, stay tuned for further updates, and let us know your thoughts on the latest Dell laptops in the comments below.