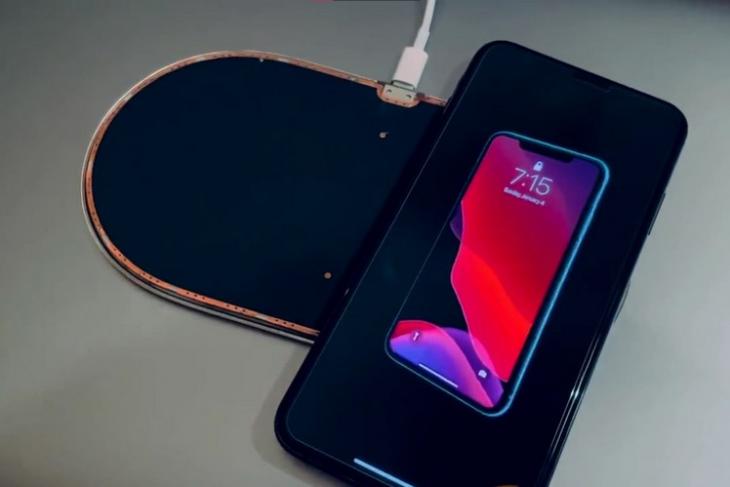 After showcasing the prototype of the first-gen Apple Watch in early 2020, prototype-device collector Giulio Zompetti has now got his hands on a rare engineering model of Apple’s canceled AirPower wireless charging mat. The Italian man recently shared some interesting tidbits about the wireless charging device that Apple could not deliver to its customers.

Now, for those unaware, back in 2017, Apple teased a unique wireless charging mat that can wirelessly charge an iPhone, Apple Watch, and AirPods simultaneously. We then saw various AirPower alternatives show up in the market. Apple, however, kept on delaying the product and eventually canceled the AirPower project, citing overheating issues and other technical problems.

Now, Zompetti, who is an avid collector of prototype devices, was able to acquire an AirPower charging mat prototype from a Chinese e-waste company. He was also able to get the device working and charge two prototype iPhones simultaneously on the charging mat. You can check out his recent tweet showcasing the working of the product right below.

Other than this, Zompetti shared some interesting information about the AirPower charging mat with The Verge. He also shared two close-up shots of the product internals, showing the intricate circuitry design of the device. You can check them out below.

As per the images, there are 22 charging coils at the front of the device and 22 controller circuits at the back. And as it is an engineering prototype, the AirPower model also comes with an interactive shell to allow engineers to interact with the device, as per The Verge.

Moreover, the AirPower prototype does not work with mass-produced iPhone models. It needs to be paired with special prototype iPhone hardware to activate the charging coils. Zompetti got the product back in December and was able to get it working using his prototype iPhones and a serial lightning cable.

“It doesn’t work with production devices, because the coils are woken up by the device. It’s an engineering prototype, it’s not meant for plug and play. When I connected my serial lightning cable to it, I could see some chars on the log, so once I fixed the BAUD rate, I was able to read a comprehensible log,” said Zompetti.

Speaking about the overheating issue for which Apple canceled the AirPower project altogether, Zompetti says that he has not been able to reproduce the said issue on his model. However, he adds that he “still can’t say it isn’t there.”

Now, it is worth mentioning that when Apple was working on the AirPower back in the day, it was a very hyped product at the time. So, when the Cupertino giant canceled the project, many fans and potential customers were disappointed. So, Zompetti says that although he has collected various prototype Apple devices, the AirPower prototype is “definitely among the best” of them.