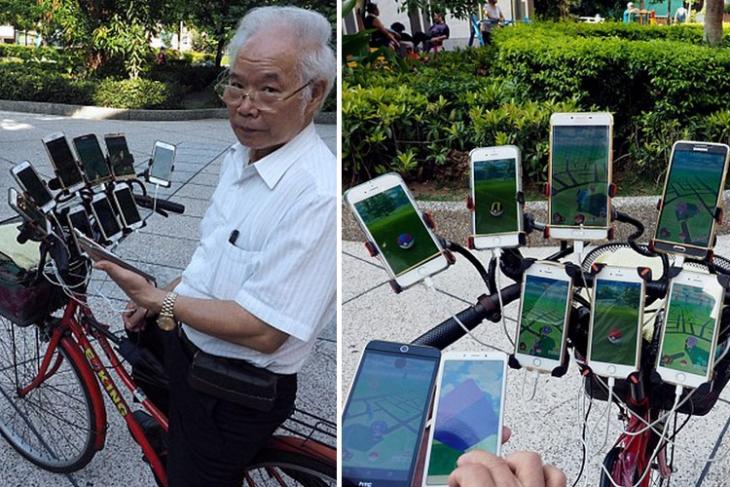 Niantic’s Pokemon Go became an instant hit when the game was released back in July 2016, so much so that authorities had to issue warnings to prevent engrossed gamers from falling into a ditch and colliding with other people among a host of other troubles. The game still has a huge following across the globe, but one old man in Taiwan has taken his love for Pokemon Go to the next level in a bid to catch ’em all.

Chen San-yuan, who is also called “Uncle Pokemon”, is a 70-year-old grandfather who strapped his bicycle with 11 smartphones to catch as many Pokemon as possible by using his multitasking skills. San-yuan rides his venerable Pokemon-catching machine in the suburbs on a regular basis and has become a celebrity in the process.

Uncle Pokemon was introduced to Pokemon Go courtesy of his grandson, and ever since then, his fondness for the game has intensified and has also taken an innovative approach. Chan initially started out with a smaller batch of smartphones strapped to his bicycle’s handle, first reaching six, then nine and finally 11 smartphones to become a formidable Pokemon hunter.

Despite his age, San-yuan is remarkably active when it comes to catching Pokemon on multiple screens at the same time, and has been interviewed by multiple media outlets for his love of the game.

But there is also another picture to the story than just an old man addicted to Pokemon Go. In Uncle Pokemon’s own words, the game also helps him stay active and fit. “There’s a lot of fun. I can connect with people, prevent Alzheimer’s disease”, he told EXP.GG.

Well, Uncle Pokemon is simultaneously enjoying the game and keeping himself healthy by just throwing in a dash of out-of-the-box Pokemon catching tactics. It appears that the Pokemon theme song’s lyrics, ‘I wanna be the very best like, no one ever was. To catch them is my real test, to train them is my cause’, suit Uncle Pokemon quite well.