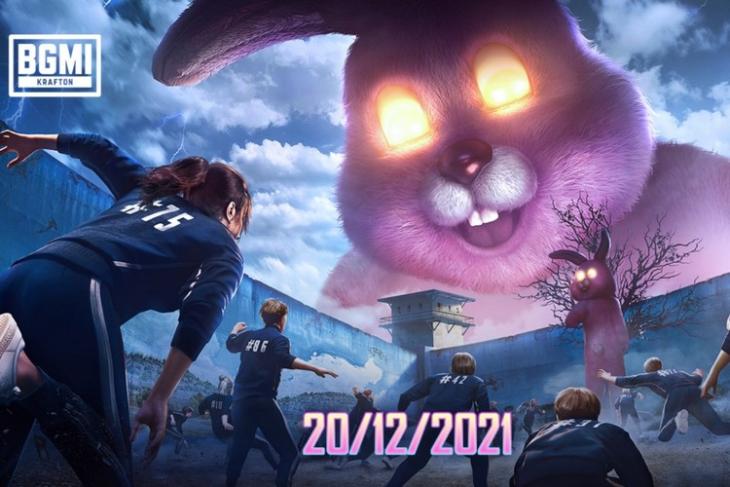 After the recent November update that brought the Arcane-inspired Mirror World theme, new gameplay features, and more, Battlegrounds Mobile India (BGMI) has now received the new December update 1.8. The update introduces a new Squid Game-inspired game mode and brings back six existing game modes to the game. So, let’s take a look at them in detail.

Krafton has added a new React Survival mode in BGMI, which is primarily inspired by the Red Light, Green Light game from the massively popular Netflix series Squid Game. Players can enter the new game mode via the Arcade section in BGMI.

In this new mode, players wear blue tracksuits with different numbers and play the Red Light, Green Light game from the popular Kdrama show. However, instead of the creepy school-girl doll from Squid Game, BGMI players will need to ensure they are not spotted by a giant Rabbit and reach the finish line to win the game. There will be three rounds in a match, each with a pre-set timer. A round will end once the timer runs out.

Furthermore, BGMI players will also be able to create a custom lobby to play the children’s game with their friends.

Other than adding the React Survival mode, Krafton had announced that it will bring back six of the most popular game modes in BGMI, including, the Metro Royale mode, Survive Till Dawn mode, Virus Infection mode, Heavy Machine Gun 2.0 mode, and the Rune Theme mode. The name of the sixth mode remains unknown. While the Metro Royal mode is already live, the other modes will reopen in the game in the coming days.

Additionally, Krafton has added the new Mythic Winter-themed RPM6, which already went live on December 20 and will be available until January 17, 2022. During this time, players will be able to get their hands on the Snow Santa Monster set, Snow Santa Monster UAZ, and the Frozen Guardian set. These rewards can be purchased with the royale pass for 360UC (the in-game currency).

The new BGMI Update 1.8 has started rolling out to both Android and iOS users. So, if you are a BGMI fanatic, you can update the game from the Google Play Store or the iOS App Store to get the new modes in BGMI. Which one of these modes are you excited about? Let us know your thoughts in the comments below.