Linux is a very powerful operating system, but it’s also highly accessible to a large number of people, thanks to distros such as Ubuntu, and the large community of people willing to help newcomers in solving their problems. You can use Ubuntu for power user functionality, and if you need a break, it supports a lot of games (both natively, and using compatibility layer software, such as Wine), as well. You can do a lot of cool stuff in Ubuntu, and you might want to show some of it off. This is where screen recorders step in. So, if you’re looking for some good Ubuntu screen recorder apps that you can use, here are 5 screen recorders for Ubuntu you can use:

Simple Screen Recorder is quite simply one of the best Ubuntu screen recorder apps you can use. The app is easy to use, and will let you quickly record your Ubuntu desktop. If you want to record audio along with the screen, the app has an option to enable that as well. You can choose from a number of audio backends, including PulseAudio, and ALSA. 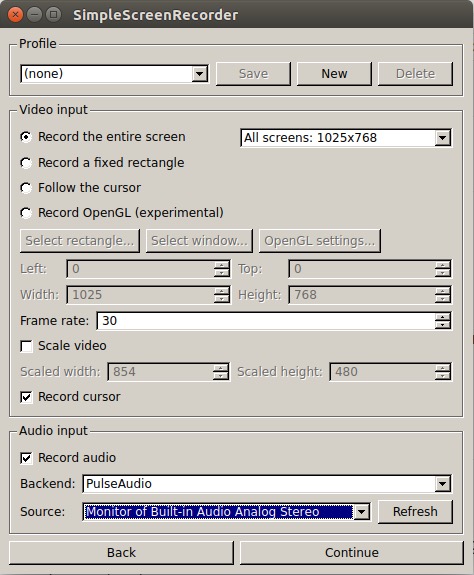 As far as recording options go, you get the option to record the entire screen, choose a segment of the screen, and even have Simple Screen Recorder follow your cursor around as you move it. The app also offers the ability to choose the frame rate at which you want to record the video, along with options for scaling the video, and recording the cursor. The app also offers a variety of formats that you can save the recording into. You can choose from formats such as MKV, MP4, WebM, and others. You can also change the video codec you want the application to use, and set the audio codec, and bitrate as well.

recordMyDesktop is another utility that you can use to record your Ubuntu desktop. The app is very simple to use, but it does offer advanced features for people who might be interested in tweaking those settings. With Record My Desktop, you can simply start recording your desktop, and all the system sounds, without having to worry about the settings. 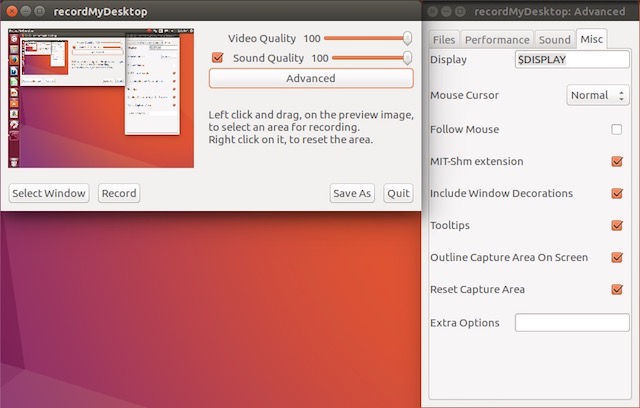 However, the app does have an “advanced” button, which will let you configure a lot of settings for the screen recording. You can adjust the frame rate for the recording, change the target display (if you have more than one). The app also allows users to enable/disable “on-the-fly encoding“, subsampling, and a lot more. The application can also follow along the user’s cursor while recording, if that setting is enabled.

Install Record My Desktop in Ubuntu

Vokoscreen is another screen recording software for Ubuntu that you can use. The app is easy to use, and the default settings are sane enough to be used directly. If you want more control over the settings for your recording, you can move between the various tabs within the app, and configure settings for the video, audio, as well as enable/disable the webcam, if you have one.

With Vokoscreen, you can configure settings such as the frame rate for the recording, along with choosing the video codec, and the output file format. The app uses MKV as the default, but you can opt for AVI, as well. Vokoscreen also lets you choose the audio codec between libmp3lame, and libvorbis, so you can choose whichever you prefer.

If you’re comfortable with using the command line, you can even use FFmpeg to record your Ubuntu desktop. FFmpeg is also capable of recording audio, using ALSA. The best part about using FFmpeg to record your desktop, is that you can configure it endlessly, and make it perfect for your use case. Also, FFmpeg comes pre-installed on Linux distros like Ubuntu, which means that you don’t need to install anything extra on your system.

To record your screen using FFmpeg, you can use the command below: 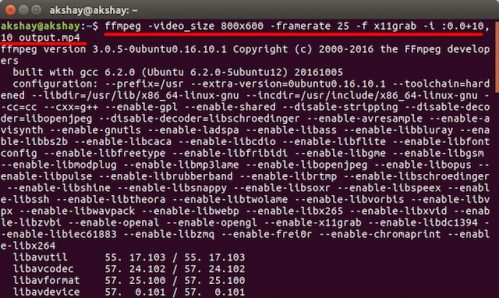 When you run this command, FFmpeg will start recording an 800×600 segment of your screen, starting at pixel (10, 10), at 25 frames per second, and save it as “output.mp4” in your current working directory. You can check your working directory with the “pwd” command.

Note: FFmpeg comes pre-installed in Linux, so you don’t need to install it from any sources.

Peek is a screen recorder for Ubuntu, that converts the screen recordings it takes, into GIF files. The app doesn’t have any advanced configuration options. However, you can adjust the frame rate of the recorded GIF by going to the app’s preferences. You can also set the delay for the app to start recording, after the record button is clicked. 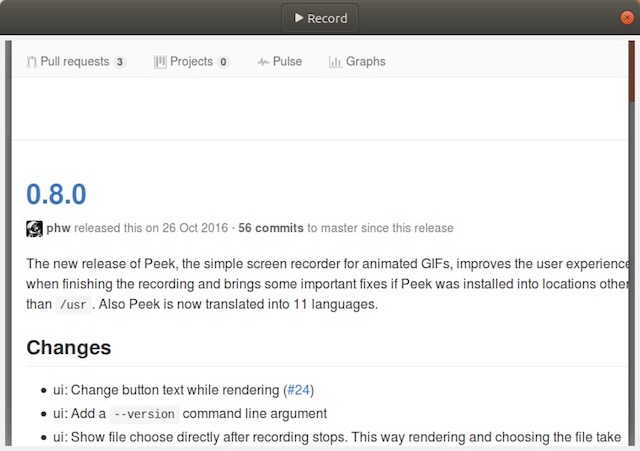 Other than that, the app doesn’t offer any extra configuration options, but it is definitely an easy way to create GIFs from your Ubuntu desktop, and I would recommend that you give it a shot if you want to make GIFs from your screen.

SEE ALSO: 7 Great Ubuntu Application Launchers You Can Use

Easily Record Your Desktop with These Ubuntu Screen Recorder Apps

These were the 5 Ubuntu screen recorder software that I think you should definitely check out for all your screen recording needs. OBS is another very well known screen recording app, but it didn’t work very well for me, during my testing, so I do not recommend it. However, these 5 apps are more than capable of handling whatever you may want to throw at them. So, feel free to try them out (they’re all free), and use the one that suits you best. Also, if you know of any other great screen recording apps for Ubuntu, do let us know about them in the comments section below.

8 Useful FFmpeg Commands You Should Use on Your Mac

How to Record Screen in iOS 11 Natively