Android is a versatile platform that allows OEMs to try out new hardware concepts. If you happen to own any decently specced Android device, you enjoy the benefits of a lot of sensors on it. One of them is the IR blaster, which has been part of high-end phones for a long time. Generally located on the top of your smartphone, it can control a lot of your home appliances that have remote control functionality built in. Your TV forms a major part of your appliance list and if you happen to lose its remote control, you can control it easily through your phone. However, you will need an IR Blaster aka TV Remote app that lets you do so. So, coming up is a list of the best IR Blaster apps aka best TV remote apps that let you control your TV or any other appliance, smartly from your phone in 2020.

Note: Your phone needs to have an IR sensor built in for the IR Blaster apps to work, obviously. You can check the availability of the sensor by going through the spec sheet of your device. You can also ensure its availability by looking for a small darkened piece of glass on top your device.

Twinone Universal TV Remote is a free and easy to use remote app for your Android device which allows users to control their TV, cable boxes, and much more using the IR sensor of their smartphone. My favorite feature of this app is that it supports various different TV manufacturers including LG, Samsung, Sanyo, Toshiba, Visio, Pansonic, and many more. That means, no matter which TV you own, chances are that this app will allow you to control it. I also love the fact that this remote app has a troubleshooting mode which you can use to solve any connectivity error that you receive while using the app on your TV. Lastly, the app is completely free to use with ads which are not so intrusive. I really like this app and you should definitely check it out. 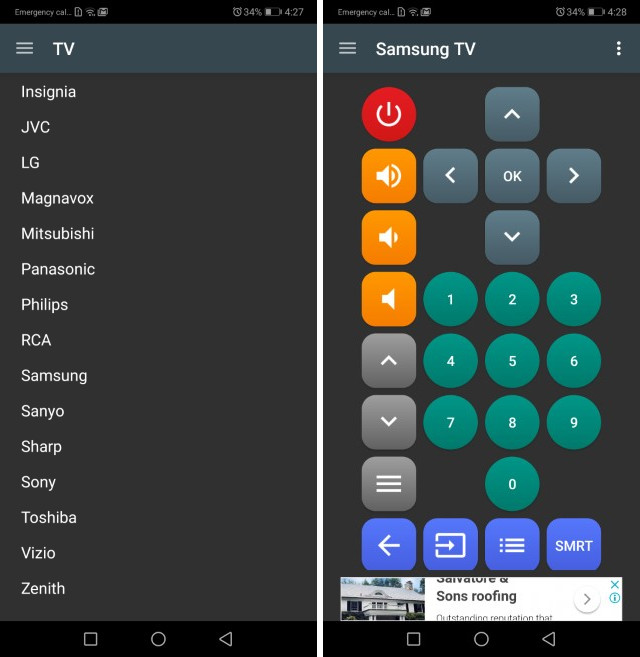 Mi Remote Controller is one of the most powerful remote controllers that you can use. Firstly, the app not only works with TVs but also with set-top boxes, air conditioners, fans, smart boxes, projectors, and more. Secondly, the app features a minimalist and ad-free UI despite being totally free which makes it stand out from other apps on this list. The app also supports various Android smartphone manufacturers including Samsung, Xiaomi, LG, HTC, Honor, Nokia, Huawei, and more. So, there’s a high chance that your device is supported. 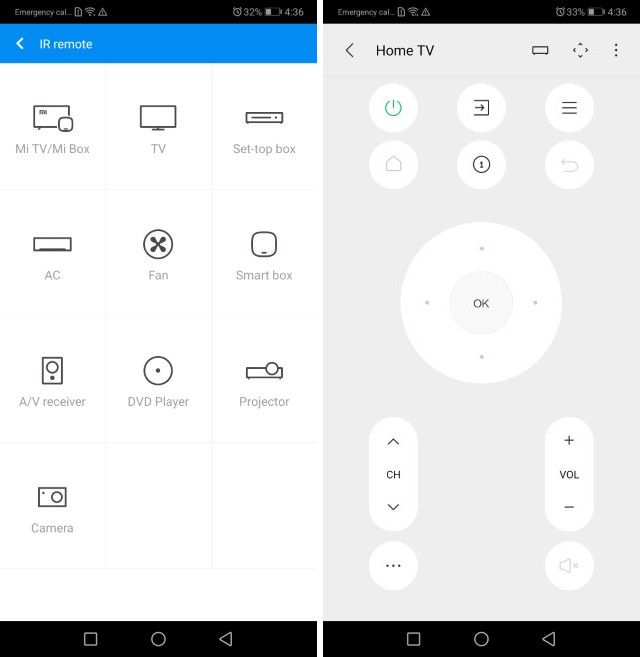 When it comes to TV brands, the supported brands include Samsung, LG, Sony, Panasonic, Sharp, Haier, Videocon, Micromax, and Onida, among others. As you can see, Mi Remote Controller offers versatility both in terms of supported smartphones and TVs and other appliances that can be controlled using it. You should definitely try it out.

If you want an app that provides you with a comprehensive control over all your home appliances, then look no further. The Smart IR Remote – AnyMote app supports 9,00,000 devices and increasing, making it much more than just a TV remote app. You can control your Smart TVs, simple TVs, air conditioners, streaming devices and anything that has an IR sensor. Oh, and did we say that this also works with your home WiFi network to connect to your modern smart devices. It also lets you automate a stream of functions, i.e., switching on your TV will automatically switch on the set top box and your home theater system. 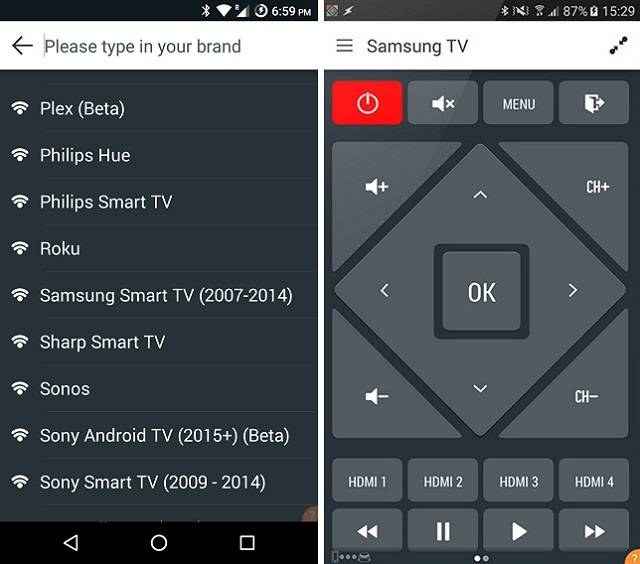 You can also use certain gestures to do specific actions, apply themes to remotes for individual pages and use the remote from any page through its floating remote widget. In short, it has been loaded with features to an extent that you will never need those analogue remotes. The app is available in a free version but it has limited features and you will have to buy the full version to unlock all the features.

If you are looking for an efficient TV remote app that does not make a hole in your pocket, you will like Unified TV. With the app, you get a comparatively lesser support for various appliances and devices (80+). But, it packs in a lot of smart features built right into it. For starters, it detects nearby devices with IR sensors (or devices on same network/ WiFi) automatically, which eradicates the need to search for your appliance manually. Then, you have widgets and home screen shortcuts, which makes accessing the remote way more easier. 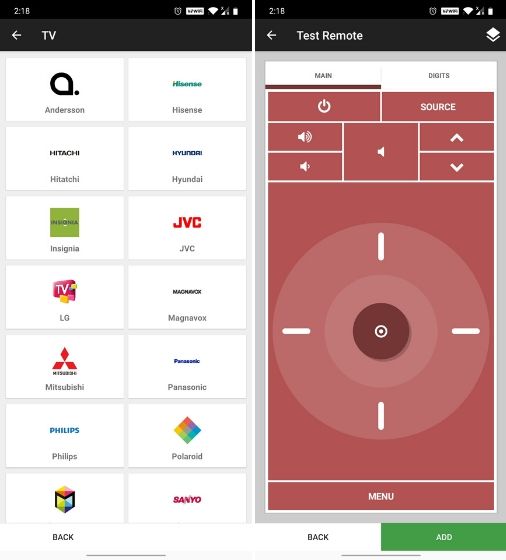 You are also provided with Tasker and Flic integration along with NFC actions. At $0.99, it lacks a bit on devices supported but is a must buy if you want a functional TV remote app.

5. SURE Universal Remote for TV

The SURE Universal Remote for TV app is one of the few free IR remote apps that does its job very well. The app supports over 1 million devices, which is great considering some paid alternatives provide lesser device support than this. You have the option to use it with WiFi-control enabled smart devices with a WiFi-to-IR converter. But, the standout feature is the ability to stream content from your phone/tablet to your TV through WiFi and DLNA, which some of the paid alternatives lack. 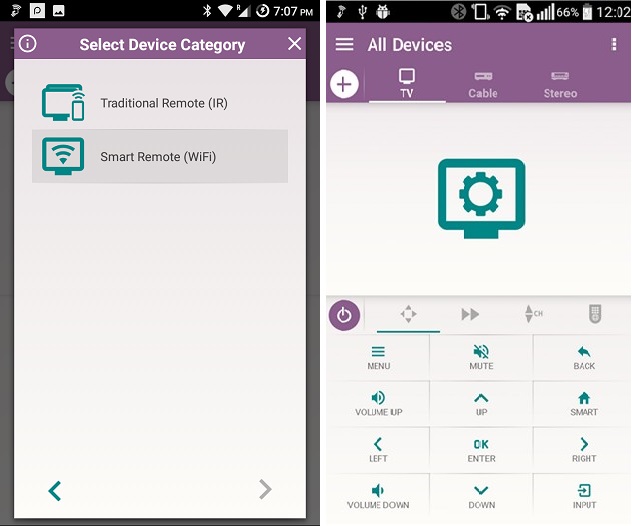 It also lets you have a custom panel with custom buttons, tailored as per your needs. Overall, this is a worthy IR Blaster app to consider if you are looking for a free TV remote app.

The Galaxy Universal Remote is an app that is effective and efficient in what it claims. Like all the mentioned apps here, this also supports a lot of devices. What makes it unique though, is that it lets you build your own personalized remote and control all your devices from a single screen, in a free-form layout. You can also save a sequence of actions (macro) to be executed one by one along with the option to save your own custom IR code to a button. 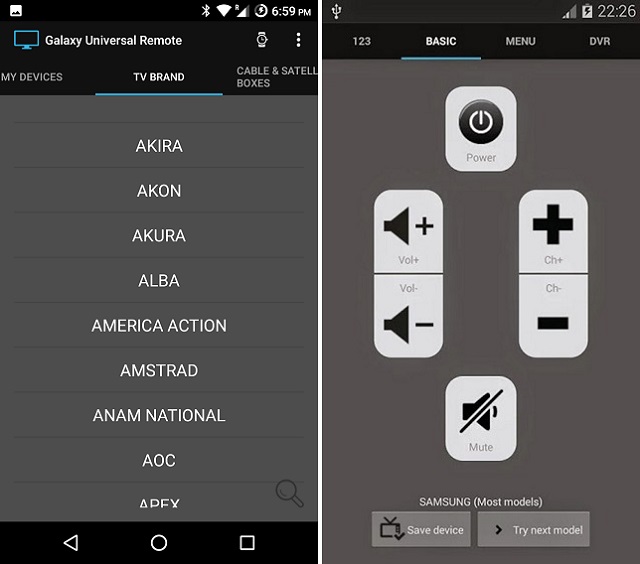 There are neatly designed widgets that save you from the effort of opening the app constantly for an action. However, there’s one major drawback, that is, no support for WiFi enabled smart devices, which makes it an IR Blaster app only. However, try this out if you are looking for an TV remote app that works efficiently.

irplus is one of my favorite remote apps in this list and there are particularly two reasons for that. First, it offers remote configurations for an endless list of appliances including TVs. From smart TVs to normal ones and from Samsung to LG, you can control almost every TV with this app. Further, the app can be configured to use ACs, STB boxes, projectors, smart Android TV boxes, and every conceivable device with IR blaster. The second reason is that there are no intrusive ads in the app except for a banner ad at the bottom. The app is clean and works really well without much troubleshooting. That said, it only deals with TVs and Android smartphones having the IR blaster. If you want an app with both Bluetooth and IR support then you can pick any of the apps mentioned above. But as far as IR remote is concerned, irplus is among the best remote apps in this list. 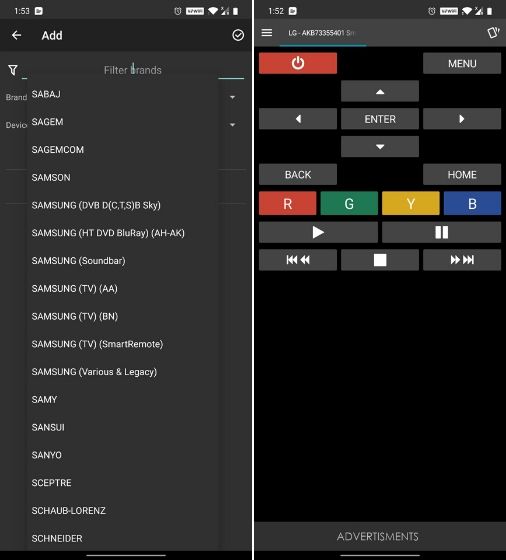 As the name suggests, Universal Remote Control is truly a universal app for controlling smart TVs, ACs, Home Theatre, Set-top box, HDMI Switch, and a lot more. You can use the app to control TVs from various manufacturers, either through the IR sensor or by using the WiFi/Bluetooth feature. It has the largest database of devices with IR support and the developer constantly updates them with proper configuration. The best bit about Universal Remote Control is that it’s compatible with portable sticks like Roku as well. So if you have connected a Roku Stick to your TV then you can easily control the whole setup with this app. Some of the other notable features are power control, volume up/down, navigation, reverse/fast forward, play/pause, etc. Keeping all the points in mind, if you want a feature-packed app with both IR and smart remote support then Universal Remote Control is a great choice. 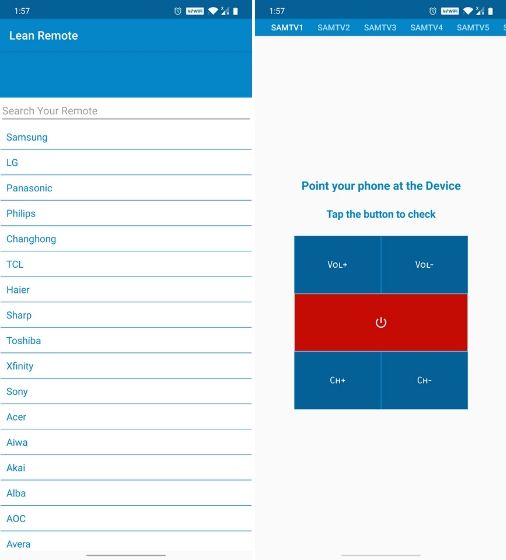 Remote Control for TV is another excellent app for controlling TVs having an IR blaster. You can turn your Android smartphone to a smart TV remote in just a few taps. The app offers remote configurations for more than 220,000 devices including TVs and home theaters. It has support for smart TVs from Samsung, LG, Sony, Panasonic, and so on. In case, your TV is old and has legacy remote configurations then you can use its various universal remote controls to check the compatibility. What’s more, the app has a layout very similar to an actual remote which should help you navigate your TV in a better way. Having said that, I did encounter a few ads initially, but it’s definitely usable and you can give it a try. 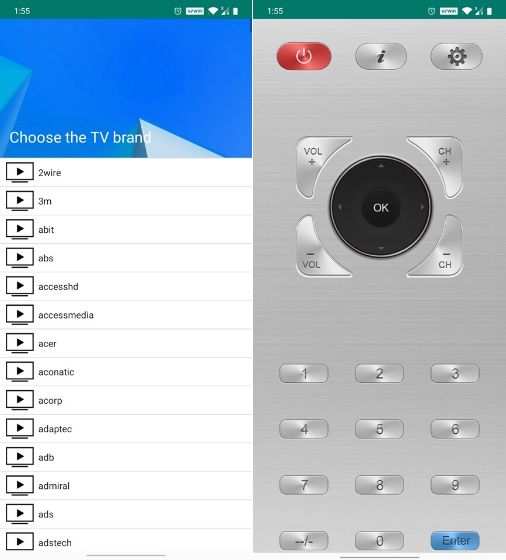 ASmart Remote IR is our final remote app in this list for Android devices. Similar to other apps, it’s a dedicated remote control for devices having the IR sensor. It basically means that you can’t manage smart TVs that use WiFi/Bluetooth for remote control. Nevertheless, you can control a large number of TVs from Samsung, LG, Sony, and Panasonic without any issue. In addition, it can also control any IR-enabled device, be it a set-top box, AC, or a DSLR camera. Apart from that, the app claims to work better with Samsung smartphones so if you own a Samsung device, this app is better suited for you. Moreover, the app interface is quite clean and modern with clear buttons so that is great. All in all, ASmart Remote IR is a capable remote app and you can comfortably use it on your Android smartphone. 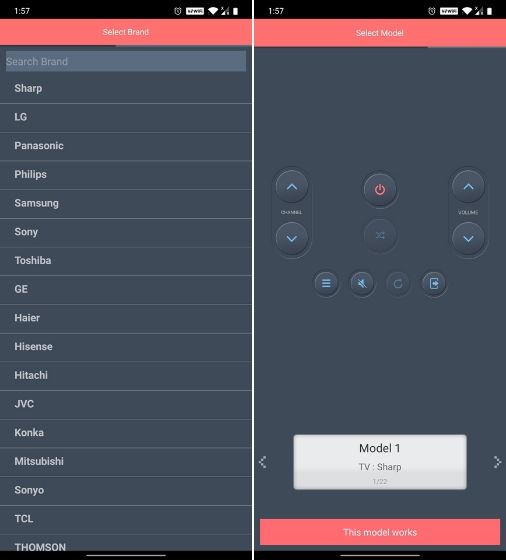 Use these Best IR Blaster Apps to Control Your TV

So, these are some of the IR blaster or TV remote apps that work very well. These surely make it easy to use your TV without the inconvenience of a separate remote controller. If you have an IR remote app pre-installed, you can check if those apps work efficiently or not. Because if they don’t, our list features the best IR Blaster Apps you can get on Android. So, try them out and let us know how you like them. Also, if you feel we have missed out on some worthy TV remote app, do let us know in the comments section below.