Every Android phone comes with a number of sensors, that feed data to the device, and allow it to respond accurately to a plethora of inputs. Almost every device in the market has a proximity sensor, an accelerometer, gyroscope, and the likes; and we barely ever notice how they’re being used. However, there are a ton of cool things that are made possible due to these sensors. If you’re wondering about the kinds of things your Android phone can do, thanks to the sensors it has, here are 10 unique ways you can use the sensors on your Android device:

The proximity sensor is responsible for turning your screen off when you put your phone to your ear, in order to answer a call. However, there are a lot of cool things that are made possible with this sensor.

If gesture control is your thing, then Wave Control will get you excited. With this app, you can use wave gestures to control the media playback on your Android device. You can set the default media player that you use, in the app, and then you can use the wave controls built into the app, to control the playback. 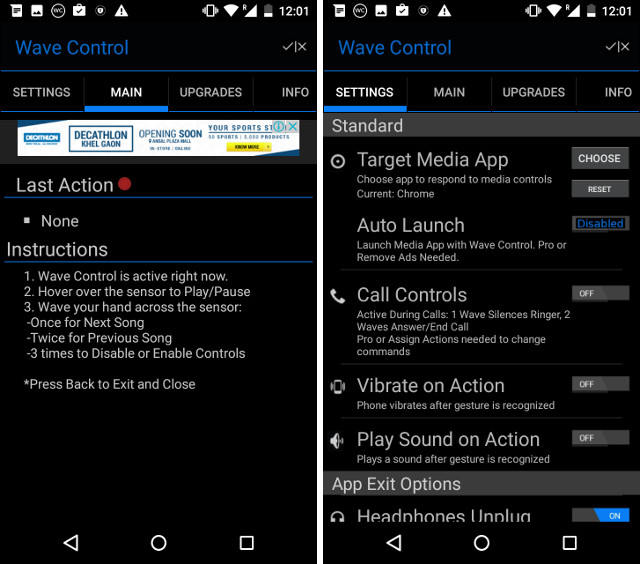 You can hover over the proximity sensor on your phone to play/pause the media playback; you can wave once to go forward, twice to go back, and more. The free version of the app is ad-supported. However, the ads can be removed with an in-app purchase.

2. Answer Calls By Raising Your Phone to Your Ear

It’s a gesture we all do when we answer a call – raise the phone to our ears. SpeakerPhone Ex is an app that automatically answers the call when you raise your phone to your ear. This simplifies the process of answering calls (which isn’t really cumbersome, anyway). The app supports features like stopping auto answer if you silence a call, and more. There are a ton of features, however, most of them are locked in the free version, and you will have to purchase the pro version of the app to unlock everything. 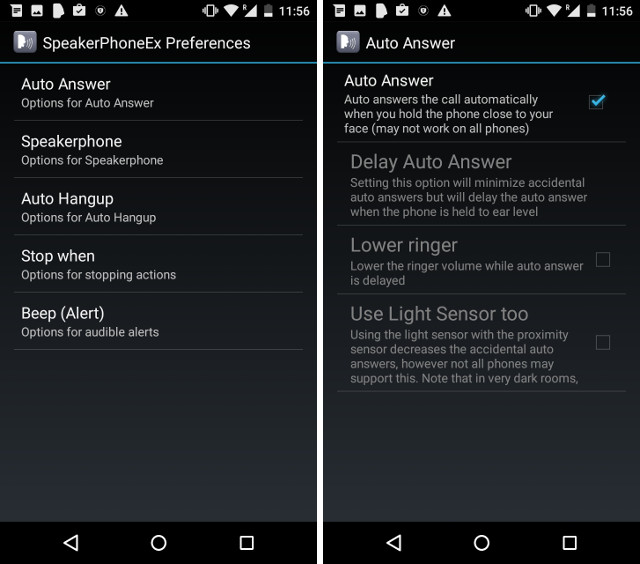 The basic functionality of the app is there in the free version, and you can use it without paying for it, unless you really want the pro features.

3. Automatically Lock and Unlock Your Screen

We’ve all been there, when the power buttons on our device is broken, and we have to use a variety of apps to put a virtual power button on our device, just so we can lock it. How about using an app that can automatically lock, and unlock your device based on how it is positioned, and whether the proximity sensor is obstructed (as it will be if it’s in your pocket)? Well, the app “Kin Screen”, does exactly this. The app supports locking the screen when the proximity sensor has been covered for 10 seconds, and unlocking the screen by simply waving over the proximity sensor. The 10 seconds time out can be adjusted if you buy the pro version of the app, which is available as an in-app purchase. 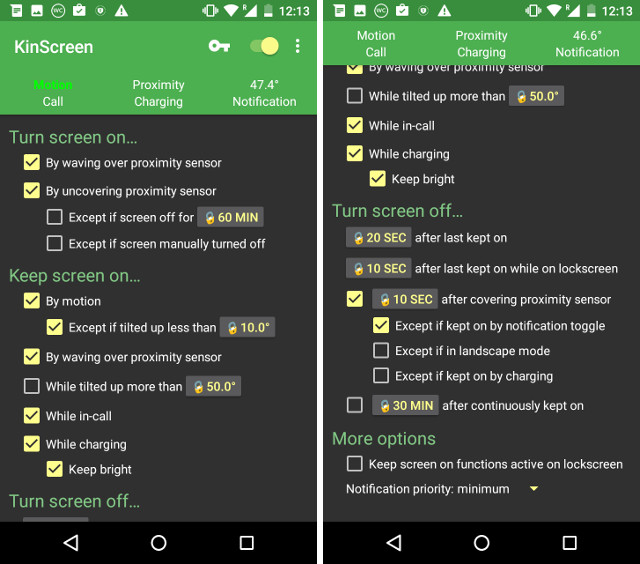 The sensitivity of the app is really great, and the app works well enough to be depended upon.

Bonus: Set Custom Actions for Gestures on the Proximity Sensor 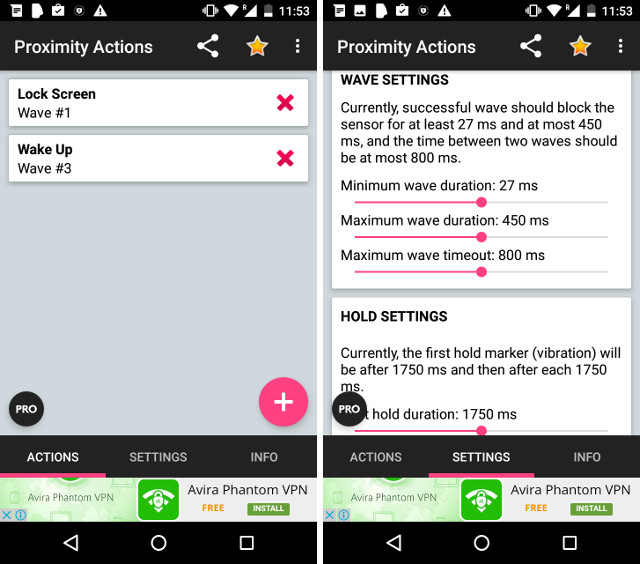 1. Use it as a Heart Rate Sensor

Not every phone comes equipped with a heart rate sensor, and if you want to use your phone as a heart rate monitor, you can do so with a great app called “Cardiograph”. The app uses your phone’s camera, and flash to measure your heart rate in much the same way, as most smart watches do. Obviously, the app isn’t accurate enough to be used for medical purposes, but for a general reading of what your heart rate currently is, you can use the app. 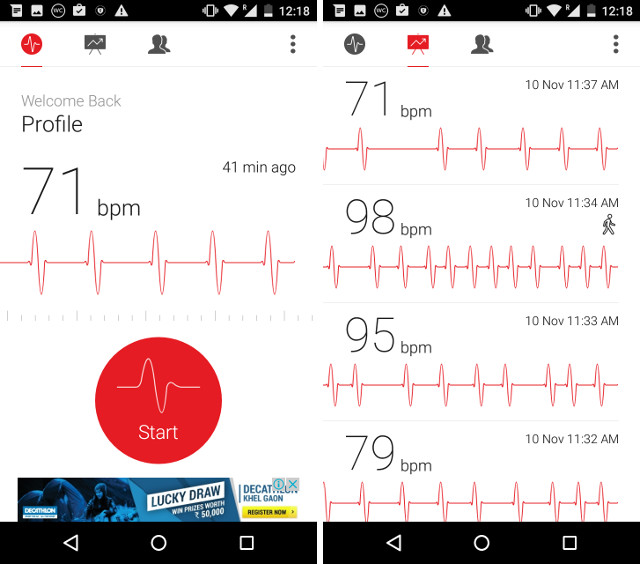 Download Cardiograph on the Play Store (Free, with in-app purchases)

2. Calculate Your Approximate Distance From Objects

If you’re ever in a situation where you would like to know just how far you are from an object, or a person, the app called “Smart Distance” will come in handy for you. The app works by using your phone’s camera, and the gyroscope. You can simply point the camera to the object you want to know your distance from, input the object’s estimated height, adjust the bounds in the frame, and the app will tell you the distance between you, and the object you’re aiming at. 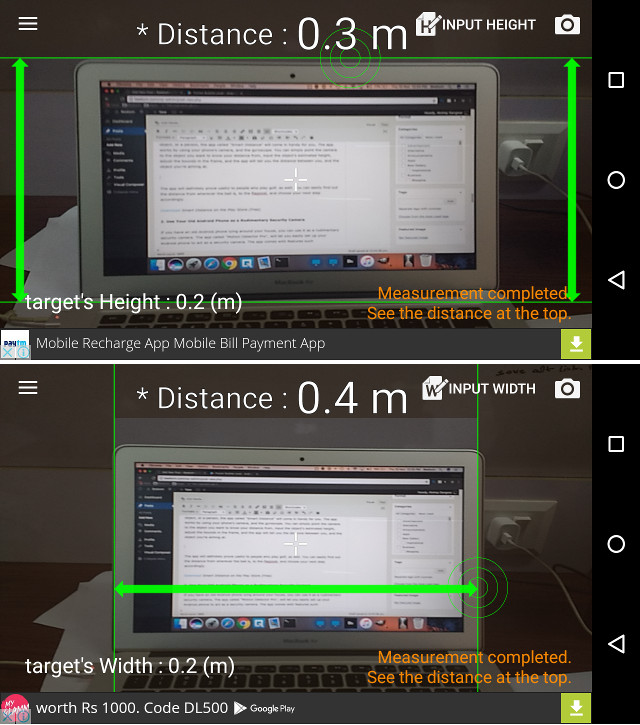 The app will definitely prove useful to people who play golf, as well. You can easily find out the distance from wherever the ball is, to the flag-post, and choose your next step accordingly.

3. Use Your Old Android Phone as a Rudimentary Security Camera

If you have an old Android phone lying around your house, you can use it as a rudimentary security camera. The app called “Motion Detector Pro“, will let you easily set up your Android phone to act as a security camera. It comes with features such as automatically clicking pictures of the intruder that triggered the motion sensor. It can even email the pictures to an email ID, that you can customize. 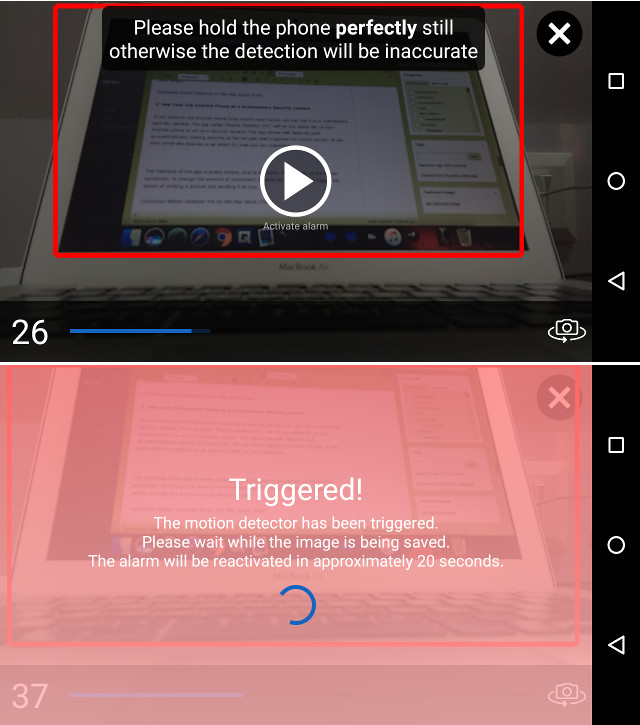 The interface of the app is pretty simple, and to the point. You can set up the sensor sensitivity, to change the amount of movement required for the sensor to trigger the action of clicking a picture and sending it to you, so as to avoid accidental triggers.

The magnetometer on an Android device is the sensor that makes the compass on your phone work. It can sense the magnetic field around the phone, and can even recognize the intensity of magnetic flux. There are some cool apps that make use of the magnetometer.

Turn Your Android Phone into a Compass

Compasses can come in handy in a lot of situations. Especially if you’re out exploring a lot, you definitely need a compass. While most “Map” applications do come with a compass, it’s not a fully-fledged one. However, this app, called “Smart Compass” gives you a full fledged compass, which uses the magnetometer in your device to let you know your heading. The compass in the app comes in a variety of modes, and one of the more useful ones, is the map mode. In this mode, you get a compass overlay over a map of your location, so you can easily figure out your bearings. 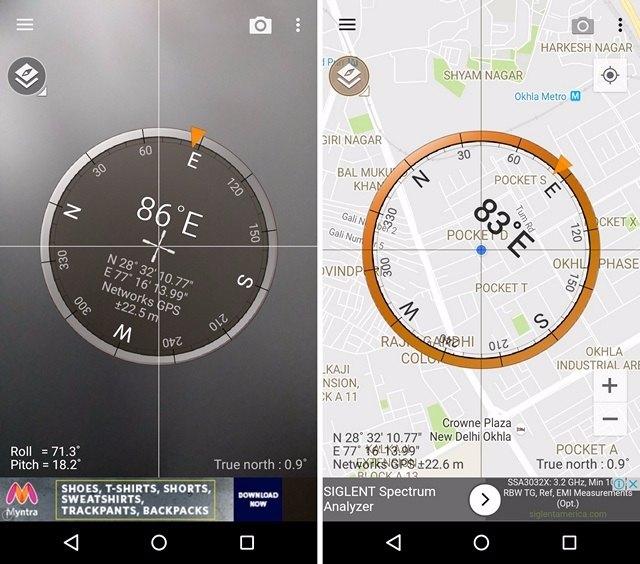 The app is a perfect companion for taking on hikes, and even treks. You can easily use any one of its many modes to guide you along the way.

Another sensor in Android phones is the accelerometer. This sensor is responsible for detecting the acceleration of the phone in the X, Y, and Z axes. This also makes the sensor a candidate for apps that measure the acceleration, or speed of moving objects.

Turn Your Android Phone into a Speedometer/Odometer 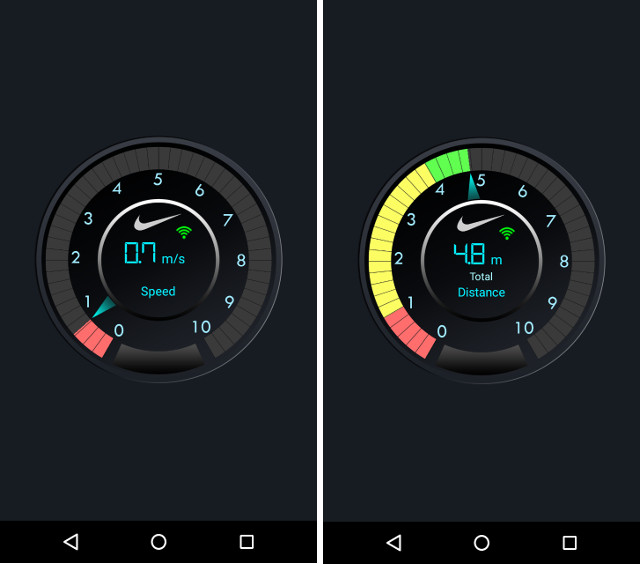 The only issue with using the app as a speedometer, is that it shows the speeds in metres/second, and not kmph, or mph. However, it does show the distance travelled in metres, which can come in handy if you’re trying to measure relatively smaller distances. Either way, the app is an interesting use of the accelerometer on an Android device.

Gyroscopes are used for measuring the orientation of the device, and can let you know about data such as the tilt of the device, and more. This data has been used in some really interesting apps; one of which makes for a good use-case example.

Turn Your Android Phone into a Level

If you’ve ever worked on a DIY, or home project, you must have used a level. However, you can also use your Android phone to do the same thing for you. If you’re a DIY enthusiast, then the app “Pocket Bubble Level” is an app that you’re going to love. The apps puts a horizontal, and vertical level right inside your phone. It uses the data from the gyroscope in the phone to figure out the tilt of the phone, in both horizontal, and vertical orientations. The app does require you to calibrate it first, which can be done easily, by placing the smartphone on a straight surface, and pressing the calibrate button. 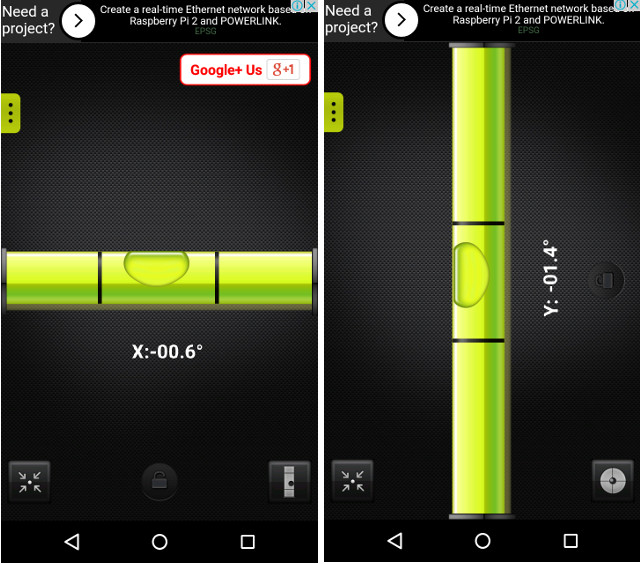 Once that is done, you can use Pocket Bubble Level as a replacement level for your DIY, and home improvement projects. The app is completely free, and is definitely useful, so go ahead and give it a try.

SEE ALSO: How to Control An Android Device Without Any Hardware Buttons

Unlock the Power of Sensors on your Android Smartphone

These were just a few examples of the myriad of apps that make clever use of the sensors on your Android phone. You can have a look through the Google Play Store and you will definitely find a lot of other apps, as well. So, how many of these apps have you used? Are you planning on using any of the apps that we covered in this article? Also, if you know of a great app that leverages the data from an Android phone’s sensors, do let us know about it in the comments section below.