Desktop computers nowadays usually have powerful CPUs with multiple core count, and the stock air cooler that both Intel and AMD provides along with these processors are quite underwhelming to say the least. If you’ve been using a high-end processor from the Intel Core i5, i7 or AMD Ryzen line-up with a stock cooler, you’d have probably realized that it just does not make the cut when it comes to cooling performance. That’s exactly why you need to invest in a good third party CPU cooler that’s capable of keeping the temperatures down and avoid running into thermal throttling issues, that arise due to overheating. Apart from this, users who’re looking forward to overclock their processors, can take full advantage of these coolers, in order to maintain the thermals. Well, if you’re already already interested in purchasing a CPU cooler for better thermal performance, here are the 10 best CPU coolers (and air coolers) you can buy:

The Kraken X62 is NZXT’s new flagship CPU cooler and it’s nothing short of stellar to say the least. If you want the best cooling performance and overclocking headroom in order to stress the CPU to its limits, this is certainly worth the investment. The Kraken X62 is one of the best looking AIO cooler as well, with a gorgeous RGB lighting on the pump. The cooler boasts a 280mm radiator that houses two 140mm fans for extreme thermal performance. That being said, the noise levels are significantly lower when compared to other AIOs, and if you want quieter performance, you can tune the fans and pump individually by making use of NZXT’s CAM software. Lastly, the rubber tubing that connects the pump and radiator has been strengthened with nylon sleeves, in a move to avoid leakage. 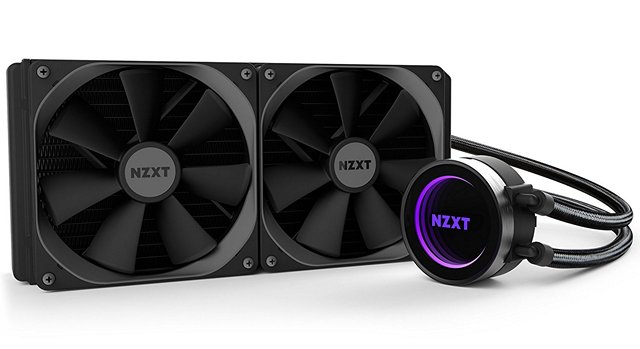 Not everyone loves all-in-one liquid coolers. If you’re one of them, then the Noctua NH-D15 is simply the best air cooler you can buy for your CPU. This dual-tower cooler is pretty huge, so make sure you have enough case and RAM clearance, before deciding on purchasing one. The Noctua NH-D15 has a 6 heatpipe dual heatsink design with two 140mm NF-A15 PWM for maximum cooling performance while overclocking, without making much noise like an all-in-one liquid cooler. 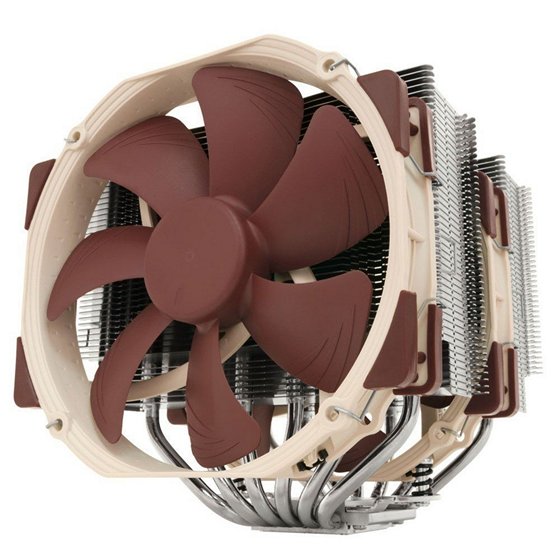 The cooler takes an asymetrical shape, in a move to provide better compatibility. Lastly, the cooler comes with the company’s high quality NT-H1 thermal compound, so you don’t need to purchase one additionally for installation.

This is Corsair’s top-of-the-line cooling solution, which primarily targets all the overclockers out there. Well, this liquid CPU cooler can handle almost anything, even when you try to push your processor to its limits, as it’s able to keep the temperatures in check. The Corsair H115i has a large 280mm radiator which houses two 140mm PWM fans, that’s capable of high static pressure delivery and customizable speed. 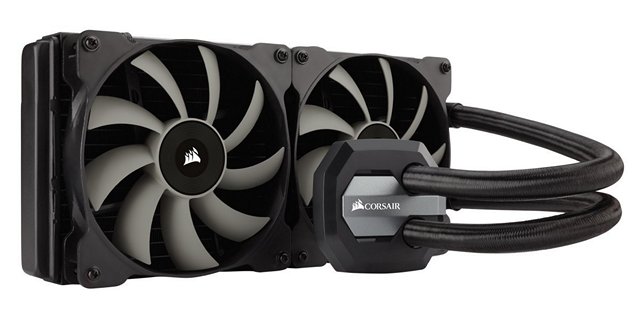 Plus, users will be able to make use of the Corsair Link software, in order to monitor the CPU and coolant temperature, adjust fan speed and customize fan speed directly from their desktop. The H115i is considered as the primary rival to the Kraken X62. Although, both offer similar levels of performance, the noise levels are noticeably lower on the NZXT counterpart.

Consider this one as a rival to the hugely popular Noctua NH-D15. Although, the Noctua cooler offers extreme cooling performance, most of us don’t like the color chosen by Noctua for their fans, as they seem pretty mediocre for any modern PC build. Well, if you’re one of them, the Cryorig R1 Ultimate is the one you should be going for, as it offers similar performance to Noctua’s flagship air cooler. The R1 Ultimate features a dual-tower CPU heatsink with heat pipe convex align system that allows for more heatpipes in a given area. It features two high precision and low noise 140mm PWM fans for maximum airflow, which is suited for overclocking. Lastly, the jet fin acceleration system, squeezes airflow and increases exhaust air speed for extreme thermal performance. 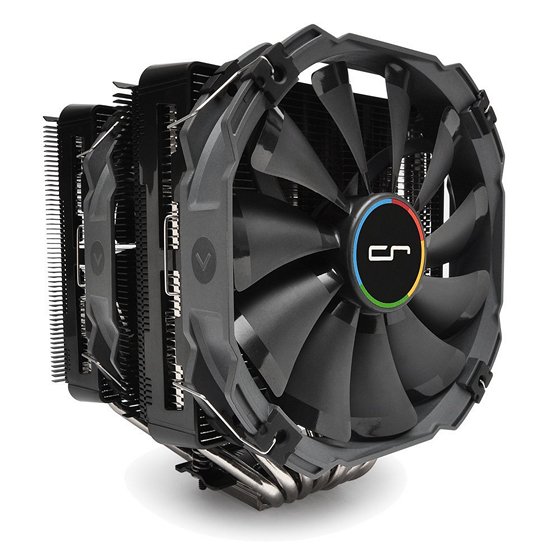 The Master Hyper cooler is one of the best selling and value for money CPU coolers out there, especially because of the kind of performance it manages to bring to the table. The Hyper 212 EVO has been around for many years, and it features a single heatsink, single fan design that’s suited for mid-tower PCs. The fan on this unit can spin up to a maximum speed of 2000 RPM and has a life expectancy of nearly 40,000 hours. The Hyper 212 EVO has 4 direct contact heat pipes for better thermal dissipation, in comparison to the competition. 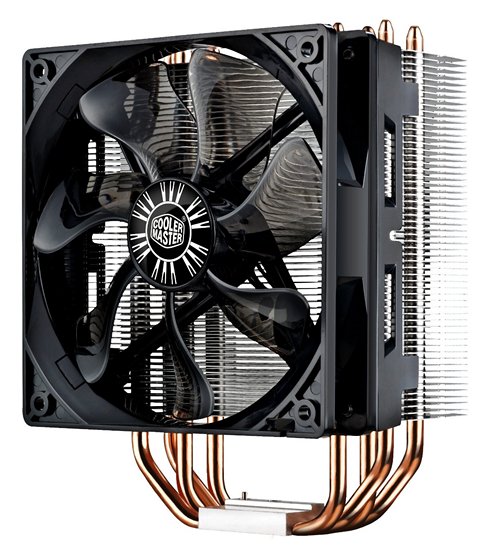 The PWM fan has a unique wave shaped design that ensures maximum airflow. That being said, if you’re on a tight budget, this is the best CPU cooler that you can buy, as it provides you with mild overclocking headroom, just in case you decide to push your CPU.

If your cabinet doesn’t have the required space to fit a large 240mm radiator, or a dual heatsink air cooler, then the Corsair H80i V2, might do the job for you. Although it’s compact in size, this high-end liquid cooler offers great overclocking performance, and keeps the temperatures in check, even when you’re stressing your CPU. The H80i V2 boasts a thick 120mm radiator with a 49mm depth that provides more surface area for rapid cooling. Two 120mm PWM fans are provided that can be installed in a push-pull configuration, that ensures high static pressure air delivery. 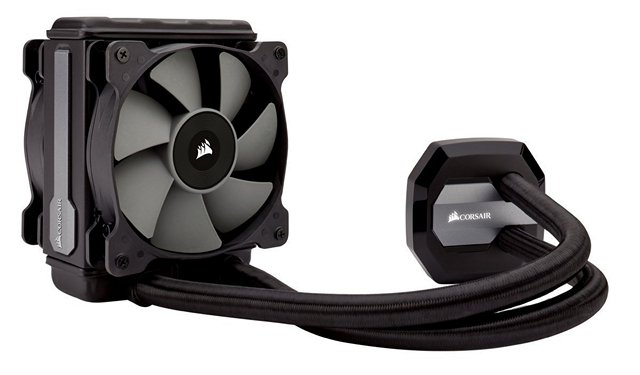 By making use of the Corsair Link software, users can monitor CPU and coolant temperature, adjust the fan speed and even customize logo lighting, without any hassle. For a price tag of just over 90 bucks, you simply cannot go wrong with this one.

Unlike the other liquid cooling solutions that we’ve seen so far, this one comes with four F12 PWM PST fans, that can be arranged in a push-pull configuration for maximizing the airflow and keep the temperatures down for extreme overclocking performance. It has a slightly smaller 240mm radiator in comparison to the Kraken X62 and Corsair H115i, but there’s barely any difference in terms of the performance it has to offer. 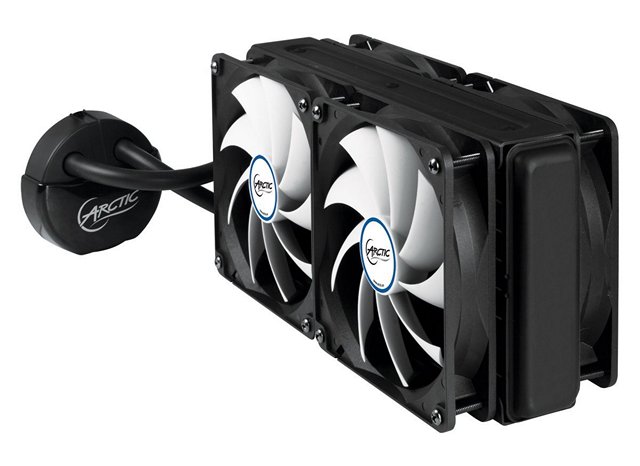 A concentric CNC surface treatment guarantees a smooth and even surface, and the dynamic fluid bearing of the CPU cooler comes with an oil capsule that avoids lubricant leakage. This cooler’s noise levels are pretty low even when the CPU is under full load, and for an asking price of under 90 bucks, it’s significantly cheaper than most of the competition and worth every penny that you’re paying for.

This is the biggest and the most expensive CPU cooler featured in this list, and coming from a reputed brand like Thermaltake, you won’t be disappointed. The company’s WATER 3.0 liquid cooler boasts a whopping 360mm high efficiency radiator with three 120mm PWM fans that features RGB lighting for all the eye candy you’ll need for your new PC build. Thermaltake provides a smart fan controller along with the cooler for quicker access to all the controls. 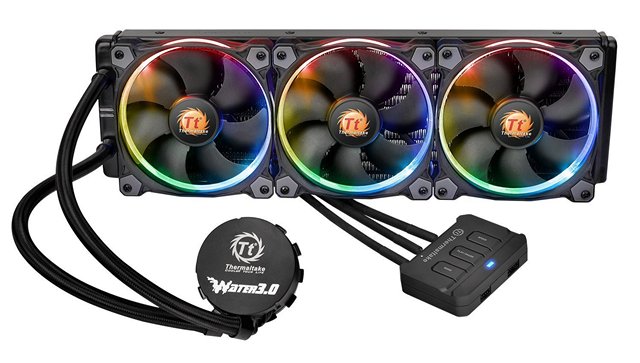 This one’s suited for people who have huge PC cabinets, due to its sheer size. All in all, the Thermaltake Water 3.0 CPU cooler can be considered as an overclocker’s dream, as extreme thermal performance is ensured. If the performance doesn’t live up to your expectations, you could install three more fans in a push-pull configuration for better airflow.

Well, we’ve got one more air cooler on the list, and this one’s more suited for mid-sized PC builds, where the space is limited. Now, this doesn’t mean the Noctua NH-U14 is missing out on a chunk of performance. It features a single heatsink design with a high-end 140mm NF-A15 PWM fan, having a round frame that complies with Noctua’s AAO standard. If the single fan doesn’t make the cut for you in terms of performance, you could purchase an additional fan and install it in push-pull configuration for much better airflow. 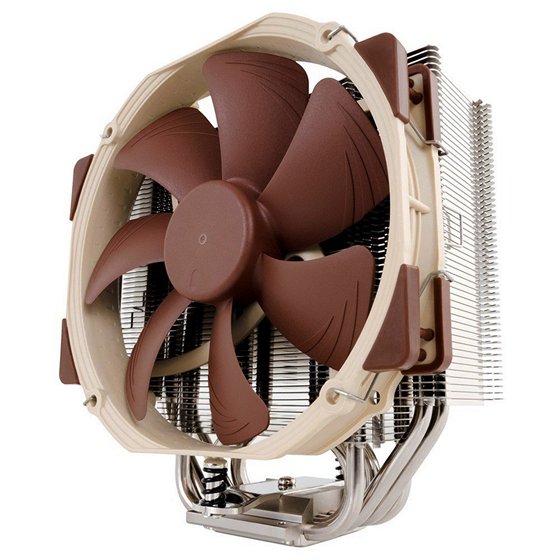 With this cooler, you’ll get decent amount of overclocking headroom to push your CPU, but if you want air cooler with extreme overclocking potential, the bigger NH-D15 should be the one you should go for. That being said, the NH-U14S is certainly one of the best single tower air cooler out there in terms of thermal performance and noise levels.

There aren’t much affordable liquid cooling solutions in the market, but the Deepcool Captain 240 is one of them, that’s worth spending your money, especially because of what it brings to the table. The Captain 240 boasts a 240mm radiator which houses two 120mm PWM fans that ensures high volume airflow for the radiator, in order to keep the thermals in check. The company’s patented pump provides breathing LED light and visual glass tube that shows liquid circulation. Durability is also guaranteed, thanks to the usage of flexible anti-explosive rubber pipes. 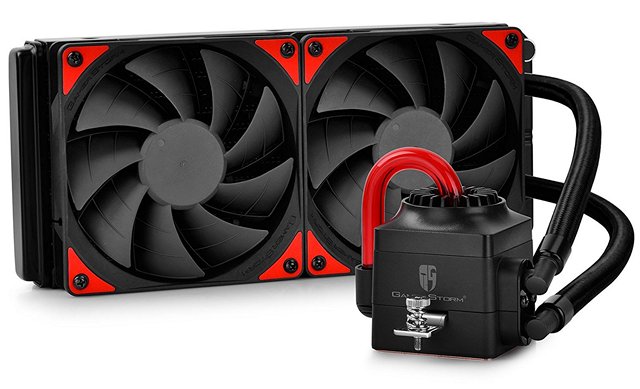 Although it’s not as exceptional as several other high-end liquid coolers in the market in terms of overclocking performance, the price point is what makes the Deepcool Captain 240 an obvious choice, if your budget is limited.

The Best CPU Coolers You Can Buy

We’re glad that we could list out some of the best CPU coolers that are out there on the market for every single price point. From budget air coolers like the Hyper 212 Evo to the high-end Kraken X62 liquid cooler, we’ve covered a lot. Now, before you jump ahead and go order a CPU cooler, it’s worth noting that the high-end liquid coolers with huge radiators will offer better thermal performance than almost all of the air coolers out there. However, if noise level is a major concern to you, air cooler might be the better choice, as it lacks the pump, which is the primary component that makes all the noise in an AIO liquid cooler.

Well, now that you know the advantages and disadvantages of the both the types of CPU coolers, which one of these great coolers are you planning to buy, and why? Make sure you let us know, by shooting your valuable opinions in the comments section down below.