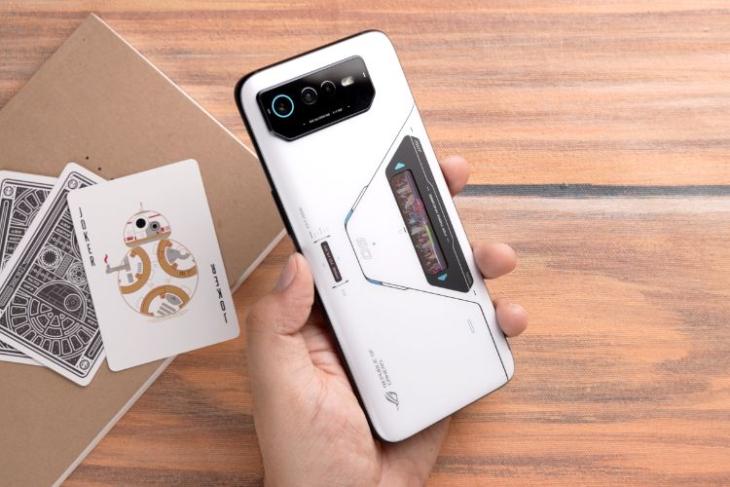 Putting an end to all the leaks and rumors, Asus has launched its newest flagship-grade ROG Phone 6 series in India today. There are two models under the ROG Phone 6 lineup – the standard ROG Phone 6 and the higher-end ROG Phone 6 Pro. Although they both are similar, there are a few key differences in terms of storage and design. So, let’s take a closer look at the specs and features before moving on to the price and availability.

The ROG Phone 6 series is to cater to competitive mobile gamers in the country who prefer smooth gaming and visual performance over other smartphone features. The standard ROG Phone 6 and the 6 Pro are pretty similar to each other.

Both the models feature an advanced 6.78-inch Full HD+ AMOLED display with support for a 165Hz refresh rate, a 720Hz touch sampling rate, and a 20.4:9 aspect ratio. The panel, backed by the Pixelworks i6 processor, is HDR 10+ certified and has Delta E < 1.

The front is protected with Gorilla Glass Victus and also comes with a special AS coating to reduce friction from hand-sweating during long gaming sessions. Moreover, the panel comes with a 23ms touch latency to deliver instant touch-to-action functions in games.

At the front, there is a 12MP Sony IMX663 sensor for selfies. At the back, there is a triple-camera setup on both the ROG Phone 6 and the 6 Pro, including a 50MP primary Sony IMX766 lens, a 13MP ultra-wide lens, and a macro sensor. However, the ROG Phone 6 Pro touts the ROG Vision PMOLED color display at the back, while the standard model only comes with a dual-LED backed RGB ROG logo.

For thermals, Asus has integrated its latest GameCool 6 cooling system, which provides 360-degree cooling to the centrally-placed dual-PCB layout. Furthermore, Asus has used a proprietary method to fill the air gap between the two PCBs with a thermal compound, which the company claims reduces temperatures by up to 10 degrees.

Furthermore, the phones feature a 30% bigger vapor chamber than the ROG Phone 5. However, if you think still think it is not enough, you can get the optional AeroActive Cooler 6 accessory, which leaked earlier, to up the ROG Phone’s thermal system.

Other than these, ROG Phone 6 and 6 Pro come with an in-display fingerprint scanner and a Super Linear Speaker system. The devices also sport two built-in ultrasonic AirTrigger 6 buttons on their edges that support 9 unique gestures. Mobile gamers can even configure 2 different functions for taping and lifting up fingers from the buttons for dual functionality in games.

These models also support Bluetooth 5.2 and Wi-Fi 6 in terms of connectivity options and are IPX4 rated for water resistance, which was already confirmed by the company earlier. It runs Android 12-based ROG UI skin out of the box and comes with an Aero Case that has precise cutouts to showcase the entire back design of the devices.