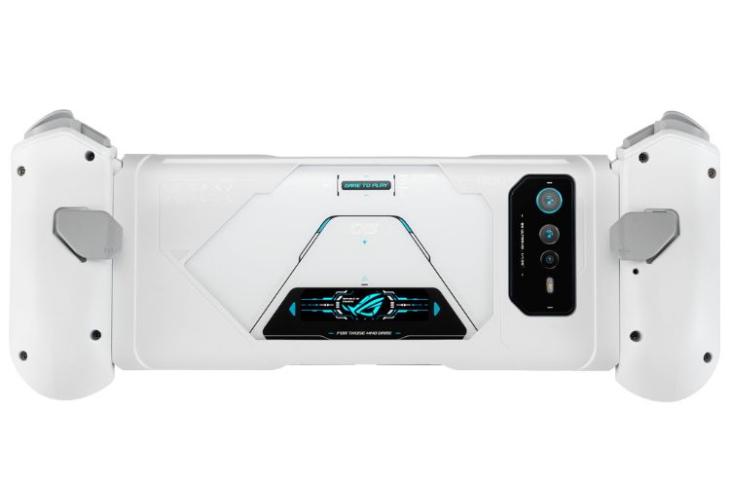 Asus will launch the next-gen ROG Phone 6 on July 5 and so far, we have seen some official details and some leaks too. In addition to the information we have, a new leak has now emerged, giving us a look at the new gaming smartphone’s accessories. Here’s a look at what to expect.

Renowned tipster Evan Blass has shared images of the ROG-branded gaming controller, which looks similar to the existing Kunai 3 Gamepad. There are buttons, a trigger, and a bumper, along with a thumbstick. The gaming controller is seen in black and white color options. We currently don’t know about the added functionalities it may provide.

The other ones are the AeroActive Cooler 6 snap-on cooling fan and the Devilcase Guardian Lite Plus case leaked via 91Mobiles. While the AeroActive Cooler 6 is shown with two extra buttons at the back, the case also has a cutout for the rear camera hump and the glowing back panel areas. Both these accessories also give a look at the ROG Phone 6 itself, which appears to share a resemblance with the ROG Phone 5.

The changes include a bigger rear camera hump and some changes for the illuminated part of the back panel. The front is expected to get a bezel-less display without any punch-hole or notch. The right side features a USB port and the SIM slot, while the left side gets the shoulder triggers.

As for the specs, we already know that the ROG Phone 6 will be powered by the latest Snapdragon 8+ Gen 1 SoC and come with an IPX4 rating, which is a first for a gaming phone. It is also confirmed to come with an advanced cooling system to reduce throttling.

The phone’s spec sheet has also been leaked, which hints at a 6.78-inch AMOLED display with a 165Hz refresh rate, up to 18GB of RAM, 512GB of storage, a 5,850mAh battery with 65W fast charging, 50MP rear cameras, and more. It is most likely to run Android 12. Pricing and other details are yet to be disclosed and for this, we need to wait until July 5. We will keep you updated. So, stay tuned!