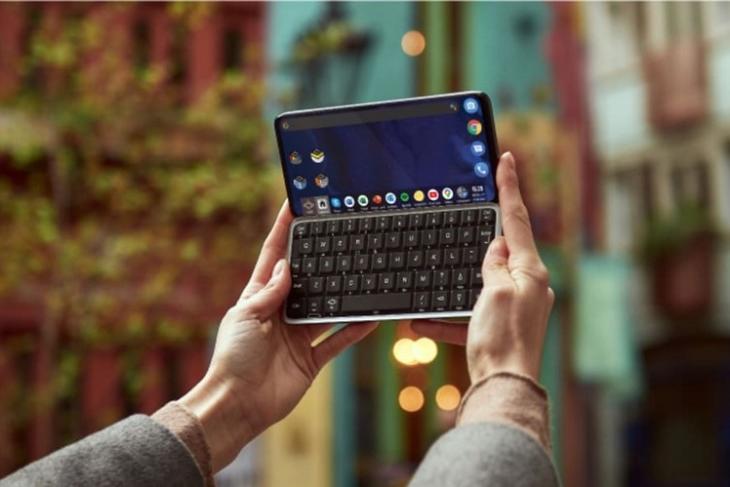 Back in CES 2018, Planet Computers took us back to the ’90s with the Planet Gemini PDA. Now, the company is back with another unique device – the Astro Slide 5G Transformer. The “transformer” part in the name represents the pocket-computer form-factor of the device as the screen of the device slides out to reveal a physical backlit keyboard.

Unlike the clamshell design of the Gemini PDA, the Astro Slide uses a slide-out mechanism to reveal the company’s signature keyboard. This keyboard is present in their previous devices like the aforementioned Gemini PDA and the Cosmo Communicator. These keyboards reflect the design of Psion devices from the 1990s and it is not surprising as Planet Computers has some Psion designers working with them.

Now, the slide-out mechanism is unlike any mechanism out there in the market right now. When the 6.53-inch FHD+ screen slides out horizontally, the hinge forms a tilted stand-like structure to support the screen at an optimal viewing angle. The company is calling the hinge the “Rock-up” design that “transforms” your smartphone into a pocket computer. 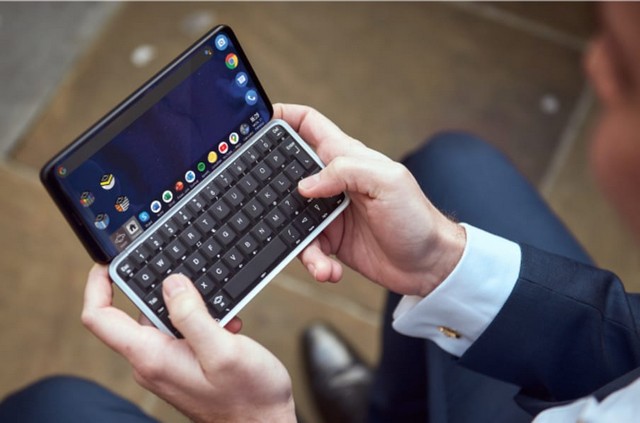 According to the CEO, Dr Janko Mrsic-Flogel, their niche customer-base always wanted a smartphone with the Planet signature keyboard ready when needed. So, the Astro Slide is firstly a smartphone that supports Android, and then it’s a pocket computer that supports Linux.

Coming to specs of the device, it comes with a MediaTek Dimensity 1000 MT6889 SoC, which is MediaTek’s first 5G chipset. This chip enables the device to attain good 5G speeds (4.7 Gbps download and 2.5 Gbps upload), as the company claims. It has a 9-core Arm Mali G77 for the GPU and also has a 6-core APU (AI Processing Unit).

For the I/O, we have two USB-C ports with OTG and display support and *drum rolls* the headphone jack. At the back of the device, it has a 48MP single camera and the selfie camera is of 5MP.

Now, as the Astro Slide is a hybrid kind of device with a backlit physical keyboard underneath, it is quite a chunky device. The device is 15mm thick and weighs around 300g (0.66 lbs). For reference, the iPhone 11 Pro Max is Apple’s heaviest device checking in at 226g (0.49 lbs).

Buy Now and Wait for One Year…

Currently, the device is in the “Prototype” phase and the company is running a campaign on Indiegogo. According to the company, they are planning to ready the primary PCB of the device by Q4 2020 and they will be showcasing the device at CES 2021. So, if you book an Astro Slide for yourself today, you will have to wait for one whole year to get it as the company will ship the devices on March 2021.

Now, with Microsoft’s Surface Duo and Surface Neo releasing this year, are you willing to get this device instead of those?

Upon asking this question to Dr Janko, he said, “We are confident that will not impact us because it’s terrible to type on the screen. Other computers in the past have tried to create a dual-screen typing experience, which has never been very good.”

So, with Blackberry phones gone from the market, if you are someone who really liked the idea of a physical keyboard in a mobile device, then the Astro Slide might be a perfect device for you.