Well, I had the chance put in a few hours with the game, so let me break down my experience and see if I can answer that question. We only turned in around 10-15 hours of playtime, so don’t consider this as a full review of the game. We had the PS4 version for review and screenshots were captured on a PlayStation 4 Pro.

Assassin’s Creed Odyssey is set in 431 B.C. during the Peloponnesian war between Spartans and the Athenians. At first blush, Odyssey, both, looks and feels a lot like the Origins. That’s not necessarily surprising considering the intricate backstory to the franchise. The game also keeps up with AC traditions it has parallel storylines, with the main narrative taking place in the distant past, and a comparatively duller character living in present day.

There is a massive, and, I mean a massive map with a new Greek setting that’s waiting to be explored. I haven’t had the chance to fully explore the map yet, but it is the most extensive map that I’ve seen in the history of the series. Much like Origins, Odyssey encourages you to explore the vast landscape. But it is also leaning into RPG elements by letting you choose everything from your character, dialogue, skill progressions, etc. to give the freedom of taking the story forward.

The Choice Is Yours, Really

To my surprise, Odyssey lets you choose between one of two Spartan ‘Misthios’ (Greek for a mercenary). You get to play as Alexios or Kassandra, who are twins and, therefore, share the same DNA. Personally, I decided to play as Alexios, but the choice is really yours.

Irrespective of your pick, the story remains the same and it won’t affect what you get to do in the rest of the game. Alexios, in my opinion, is a lot different than any other previous Assassin’s Creed protagonist.

I think Ubisoft has created a hero who is more open to little joys of the world. Despite being a mercenary, I found Alexios to be more open to jokes, occasional romantic encounters, etc. Of course, the characters will evolve over time and may change how they react to certain situations, but I feel Odyssey’s characters will be remembered as one of the best protagonists we’ve had in the series.

The character selection isn’t the only decision you’ll be making during your time with the game. The Assassin’s Creed Odyssey has also introduced a new dialogue system that gives you an opportunity to explore additional storylines and unlock side missions. It is the biggest change in the franchise and honestly, I really like this approach as it opens up a ton of opportunities.

I also think this would be a good time to talk about new gears and just combat, in general. You get several slots for each gear like breastplates, bracers, boots, etc. There’s also a wide selection of weapons like swords, blunts, bows, and more. You have the freedom to whip out any of these weapons and couple them with the Spear of Leonidas. This spear, which replaces the iconic Assassin’s Creed hidden blade, can be used to deal with soldiers, bandits, etc.

Ubisoft has also updated the combat system in the game to match the character of a mercenary. Unlike an Assassin, I found Alexios to be, well, more brutal. He has a wider set of skills which I found to be very effective in battles. Odyssey also introduces some new moves like Sparta Kick, Shield Breaker, Rush Assassination, etc., which you can map to D-Pad buttons and have them ready at your fingertips to slaughter the enemies. The Spartan Kick is my favorite move, as it can slam an enemy down to the ground, buying you some time to deal with others. (Duh, I like it mainly because it is a pleasure watching Alexios slamming a soldier to the ground) 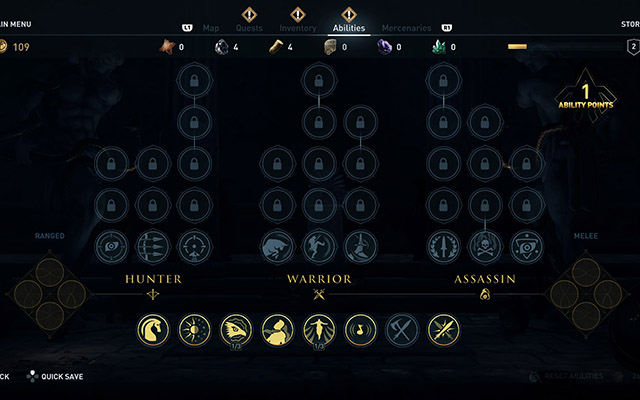 I’ll have to warn you though, the Assassin’s Creed Odyssey is a very long game.

Assassin’s Creed Odyssey: This Is Sparta!

The word Odyssey is linked to the story of warrior Odysseus, which has been considered one of the toughest stories to adapt because of the depth of storytelling. Well, I may not have played the entire game, but based on my first impressions, I think this game lives up to its name. I truly believe that the Assassin’s Creed Odyssey is a grand installment in the series, and it offers a rewarding journey.

That being said, I’d like to point out that it took me a forever to get the title screen. Yes, I am talking about the screen which says “Assassin’s Creed: Odyssey” for the first time before you dive into the main story. At one point, I even felt none of what I was doing made any sense, only to realize that the main story was yet to hit me. So, don’t come expecting a crisp story or a short game. This is a saga, just like the name it’s taken on. Get ready to wander through the rich land and take in the glorious visuals for hours before you find yourself a quest.

Overall, I feel Assassin’s Creed Odyssey is one of those games that’ll make you scratch your head until you’ve invested a good chunk of time in it. I’d say the Assassin’s Creed really picks up after you’ve spent a weekend exploring the setting, the history and the characters. And it picks up in a way that’ll leave you craving for more. So, take a deep breath, come for the story and stay for the adventure.