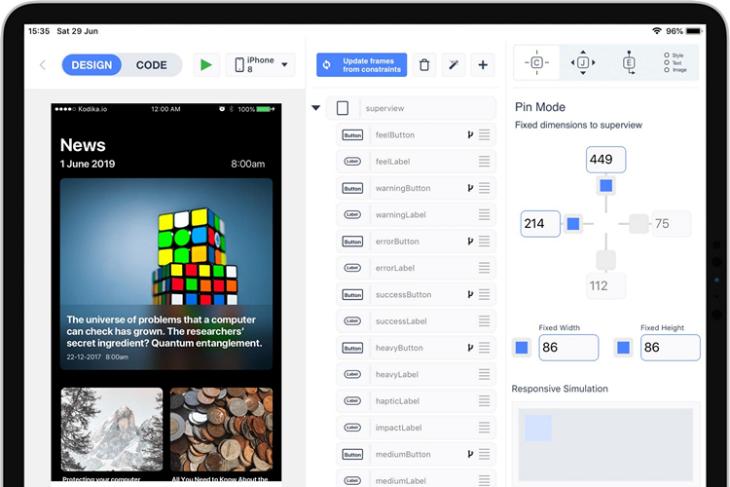 Are you highly enthusiastic about building iOS apps but lack hardware resources to do so or lack relevant coding skills to develop a powerful app? Worry not, there exists an iPad app named Kodika that lets you build iOS apps with simple drag and drop actions.

The app lets you create a responsive iOS app by dragging and dropping almost everything including images, buttons, and even lists. You can use several pins and constraints to design the app just how you want it to be. Cool, right?

It is worth noting that Kodika supports all native UI elements of Apple and hence, you don’t miss out on major design tweaks by using the app. Also, it allows you to efficiently organize font and color style guides in order to maintain consistency throughout the app.

If all these sound familiar, it is because the editor is based on Google’s Blockly. The developers claim that Kodika is an improved version of Blockly.

One of the coolest features of Kodika, however, is that you can test the apps right away without the need for compilation. You can run the app without exporting or building the code as well, according to the website. The editor supports REST API in case you’re wondering. Moreover, you can improve screens from Zeplin using an extension.

With Kodika, you don’t have to go through any long process while releasing your app to the App Store, thanks to the “One-click release” feature present. Kodika automatically generates all the certificates, provisions profiles, and releases the app to the App Store.

A macOS version of Kodika is on the way, expected to release this Fall. However, you can sign up for the beta version that will start rolling out in the upcoming weeks from here.

Check out the app from the below link and let us know if you found this helpful in the comments.

WhatsApp Head Loves the Idea of an iPad App; Launch Might Be in the Cards