Skip to content
Home News Among Us to Add Hide and Seek Mode, New Colors, 15 Player Lobbies, and More 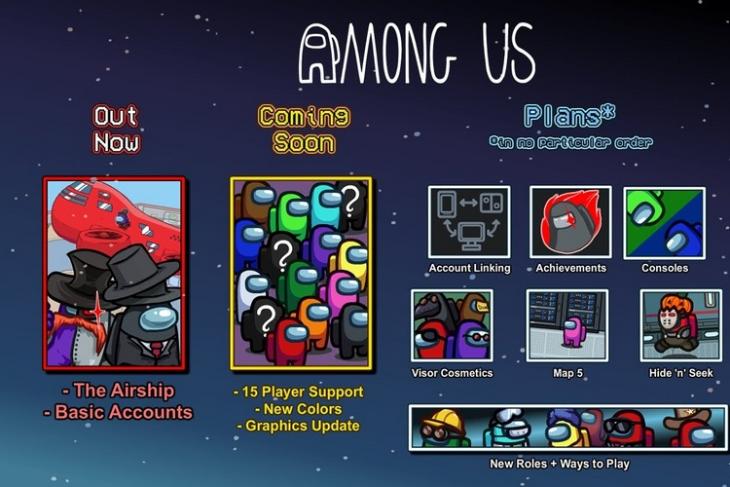 Among Us has revealed its roadmap of updates as part of the Summer Games Fest. It includes a new map, a hide and seek mode, 15 players support, account linking between platforms, and more. InnerSloth, the developers of Among Us, has not shared a release date for these updates.

Among Us Update Roadmap

The next update of the game will increase the maximum number of players from 10 to 15. Alongside this change, the developers have planned to introduced new colors for players, including Rose, Gray, Coral, Tan, Maroon, and Banana. Also included in the update is a slight graphics update and support for mobile controllers.

Among Us will soon introduce two new roles. With this addition, you’ll be able to play the game as a Sherriff or a Scientist. Apart from these, the game will unlock the possibility of honking the horn in the Airship.

📣 ability to honk horn in the Airship 📣 pic.twitter.com/4FtC6CT8bP

After the next update, InnerSloth will work to add a fifth map, but the developer has not shared the specifics of this map yet. Among Us added its fourth map, The Airship, recently. The game will also introduce a new hide and seek mode at some point in the future.

Other features in the roadmap include achievements showcase, account linking between platforms to help sync save data and cosmetics, and visor cosmetics. The game will also make its way to Xbox and PlayStation consoles later this year. All these updates should come to the game over the coming months. Innersloth will announce the exact dates for all these updates soon, so stay tuned.

If you recently claimed Among Us for free via Epic Games Store, make sure you don’t miss out on these new updates. You could also install and play Among Us on your Chromebook and join Among Us Discord servers to connect with the community or find gaming buddies to help spot the impostor.