3D printing is one of the most exciting technological developments in the past decade. The ability to quickly print parts, toys, models, and just about anything else on demand is like something out of a sci-fi novel—but you can do it right from your desk at home. These printers were incredibly expensive when first released, but their prices have come down significantly. So significantly, in fact, that these 10 are very cheap.

With easy snap-fit assembly, the ability to create a custom reservoir size, eight different colors of resin, and a price that absolutely cannot be beat (even by the 3Doodler 3D printing pen), the Peachy Printer might be the best way to get into 3D printing for the first time. Peachy is also dedicated to developing free, open-source software that anyone can use and modify for their own purposes, making this printer even more affordable over its lifetime.

The Peachy Printer hasn’t been released yet, but the company is hoping to start shipping pre-ordered units sometime this month (October 2015). You can also pre-order PeachyJuice Stuff, the resin used for the printer, at $60 for one litre of a single color. Also in development by Peachy is a fully assembled 3D printer, so you won’t have to go through the assembly process—the projected price for this device is $400 (though with the snap-fit assembly, you should probably save yourself the $300 and just do it yourself).

The FabX 2.0 builds on the very successful FabX 3D printer, but adds a number of great features. The outer case of the printer is smaller, though it retains a build volume of 100 x 100 x 100 mm. It comes packed with useful abilities, like  automatically leveling build plates, printing from a micro SD card, cooling your print as it’s being made, and minimization of printing vibrations. All of this, and it’s still very simple: there’s a single button to print, and that’s it. No complex controls.

While the FabX 2.0 is sold in India, 3Ding does offer international shipping, though this may significantly affect the price (their website also notes that there’s typically a lead time of 3–4 weeks on each printer). Even so, however, this remains one of the best deals you can get on a home 3D printer.

With a build size of 80 x 80 x 80 mm, Tiny Boy’s Mini Fabrikator is one of the most compact 3D printers out there—in fact, it was built to be so small and portable that it could be used in schools to introduce kids to 3D printing. Because of this focus, the printer is very easy to assemble and maintain. It’s also open hardware, meaning you can do anything you want with it. 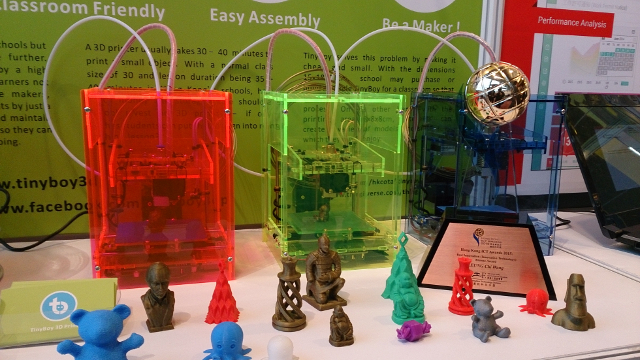 Its price is only beaten by the Peachy Printer, and it’s likely that these two will slug it out for the title of best cheap 3D printer. And if the community support that the Mini Fabrikator has continues, it’s likely that we’ll see modifications and improvements in the near future, making this an even more appealing option.

Although it hasn’t been released yet, and the company isn’t yet taking pre-orders, the Tiko unibody 3D printer is a very exciting development. Very affordably priced, the printer includes a lot of unique features that you won’t find elsewhere. The unibody construction makes it strong, light, and easy to assemble. It also protects the liquefier and the printing area. The filament used in non-proprietary, so you can use just whatever kind you like. And all of this requires very few high-precision components, making it very affordable. 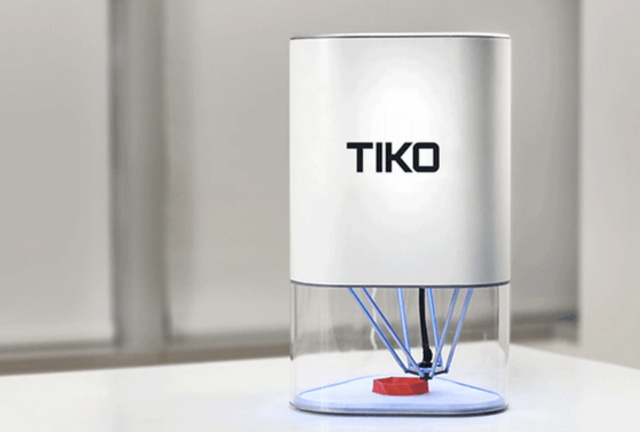 Despite not using high-precision components, the printer is made to be very consistent. Tiko has used an entirely new design that uses different parts from any other 3D printer out there, making it totally unique. When it’s released, this printer could shake up the home 3D printing scene!

The Micro was designed to be a very versatile 3D printer, equally at a school, an office, or a home. And with its limited-time $349 price, it’s one of the most affordable printers available. The build area is small at 109 x 113 mm at the base, dropping to 91 x 84 mm above 74 mm, up to 116 mm, but the entire printer isn’t much bigger than that, making it very portable. 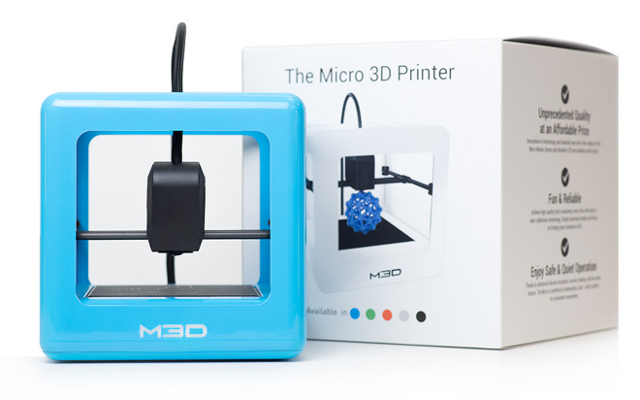 Auto-leveling and auto-calibration aid in the setup of the printer, though you’ll still need to do some fiddling yourself to make sure everything is working properly (as you will with any 3D printer). And if you’re looking to add accessories, like an extra print bed, BuildTak sheets, or spare nozzles and fans, you can order them directly from the M3D store, along with a number of filament colors.

One of the big advantages of this reasonably priced 3D printer is that it can be ordered fully assembled, so you don’t have to take the time to put everything together. Its 100 x 100 x 130 mm build area is one of the larger ones you’ll find around this price, and it includes a micro SD slot for untethered printing so you don’t have to leave your computer in one place for hours on end.

For an extra $100, Printrbot also offers the Simple, which has a larger build volume (150 x 150 x 150 mm), which might be worth the increased price if you’d like to go beyond the capabilities presented by the Play—you can check out the video above to get Printrbot’s advice on which model is best for you. All in all, though, the Play provides a great value with solid construction.

While you can buy this printer for $600 from its creator to support the further development of the project, you can also get a DIY kit for the phenomenal price of $365 on Amazon, though this price doesn’t include the case. The i3’s build area dwarfs that of cheaper printers at 200 x 200 x 200 mm, letting you think big when you’re planning your next printing project.

The i3 is a popular 3D printer with a solid reputation, so you can buy it with confidence. The complete printer includes an LCD screen for use without a computer, a heated print bed that prevents ABS prints from warping, and a maximal speed of 200 mm/s, significantly higher than that of cheaper 3D printers. It even comes with the minimal set of tools you need to put it together.

The Flux is a fantastically useful printer—not only does it do 3D printing, but it can also handle 3D scanning, something that no other printers at this price point can handle. The deluxe model ($750) also includes an attachment for laser engraving. The compact case and delta design make for a very portable, very accurate printer. Although the build area is relatively small—170 mm in diameter and 180 mm in height—it’s big enough for many non-industrial projects.

Flux functions with a smartphone app, meaning you can use it wherever you are, monitor the status of your current print job, and get notified when it’s done printing. Wifi connectivity also means you don’t need to leave your computer plugged in while it’s working. And its space-age looks lets it double as a cool conversation piece!

Like the Tiko and the Flux, the MOD-t is a very nice-looking machine, equally at home in a workshop or a living room. But it’s not all looks; with a browser-based interface, removable bed, and no need for leveling, it’s also very easy to use. And wifi connectivity means you can conveniently start the printing process no matter where your computer is. 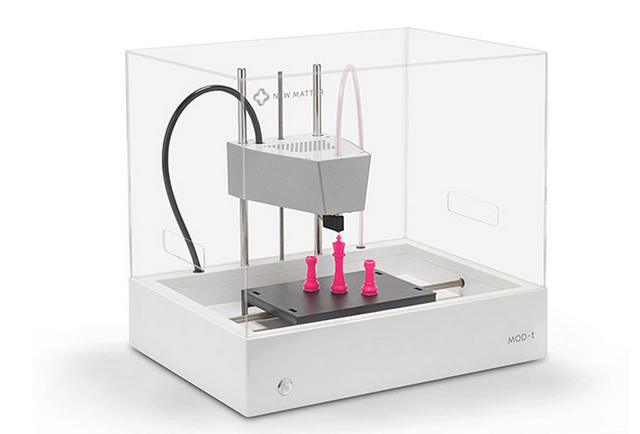 The build area is a very respectable 150 x 100 x 125 mm, letting you create small- and mid-sized projects without difficulty. And the entire printing area is protected by a clear plastic cover, reducing noise and keeping environmental factors (dogs, children, wind) from interfering with your print. At the time of this writing, the MOD-t is backordered by six weeks.

At the top end of the range, the Cube’s price could be prohibitive for beginning 3D printing enthusiasts, but this 3D printer packs a lot of features that make it worth your money: smart printing spools, an app for remote printing and monitoring, wifi connectivity, high-speed printing, and a color touch screen make this a very beginner-friendly device. 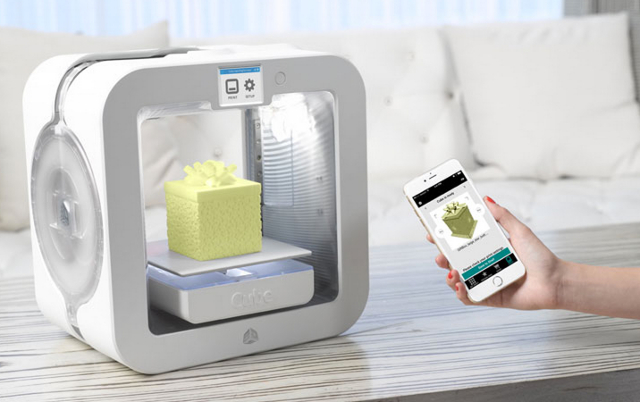 The Cube has a solid print capacity for a printer this size, letting you create models of around 152 x 152 x 152 mm. Its sturdy design and home-safe certification mean you won’t hesitate to keep it in your home—and its good looks don’t hurt, either. Cubify also sells a number of value packs that include additional accessories and software to get you up and running right away.

SEE ALSO: 30 Cool Inventions You Should Know About

3D Printing for Everyone

No longer the hobby of engineers and the very wealthy, a slew of new 3D printers is bringing this technology to the masses. For as little as $100, you can get started with your own home 3D printer. And with the ever-increasing number of options, you’ll be able to find one that fits both your budget and your needs. Pick one and get started today!