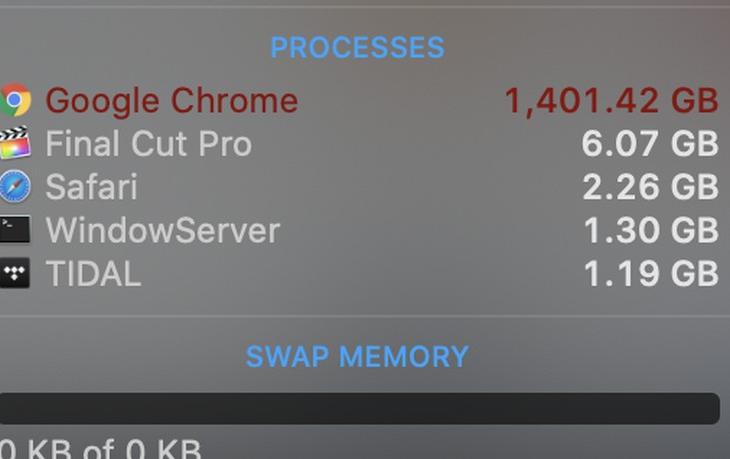 Apple’s Mac Pro is one of the most powerful machines that is available in the market. The highest tier version coming with 28-cores and 1.5 TB of RAM is just insane.

Tech enthusiast and YouTuber, Jonathan Morrison, tested out the Mac Pro in several ways to check out the full power of the machine. He created a full pro-res 16K video file and ran a Multi-Cam view on Final Cut Pro, playing 16 videos simultaneously. After this, he ran a test with two renowned music producers creating a song in Logic Pro X using hundreds of tracks and plugins.

The Mac Pro did not break a sweat carrying on with these projects. However, recently Jonathan found a way to finally max-out the machine…and his weapon of choice? Google Chrome!

On January 7, the YouTuber tweeted a post showing that Google Chrome is using a whopping 75GB of RAM. That is when he decided to carry out another mind-bending test to max out the Mac Pro. The test? Opening 6000 Google Chrome tabs of legit websites, simultaneously!

Now, opening 6000 tabs of working websites one by one would take a hell lot of time, obviously, and the YouTuber did not want to open blank tabs. Hence, Jonathan made a script using the “Automator” and made a list of 50 legit websites. First, he copy-pasted this list 20 times to create 1000 tabs. Then he went on to increase the number gradually. When he reached 5000 tabs, the CPU cores were spiking across the board, but the RAM usage was 200-300GB. Then he decided to run the process for another 1000 tabs, and this is when things got sticky. Upon reaching 6000 tabs, the machine was using 1,440GB (1.44TB) of RAM out of 1.5TB, and rapidly increasing.

Up until this point, Chrome was usable. It means, he was able to switch the tabs. But after the 6000-mark, the “Activity Monitor” of the Mac showed that the system was using 1.49TB of RAM and there was one Chrome tab that was not responding (unsurprisingly). So to make Chrome usable again, he tried to “Force Quit” the unresponsive tab. That made the whole application crash and gave 1.49TB of memory back to the machine.

No matter how insane his test was, it was still unable to crash the whole machine. However, no application has been able to use the full RAM of the Mac Pro until Google Chrome. Not that an average user (or even a professional user) will work with 6000 Chrome tabs, this test was performed just for the curious minds.

Head here if you want to check out the Interesting video.