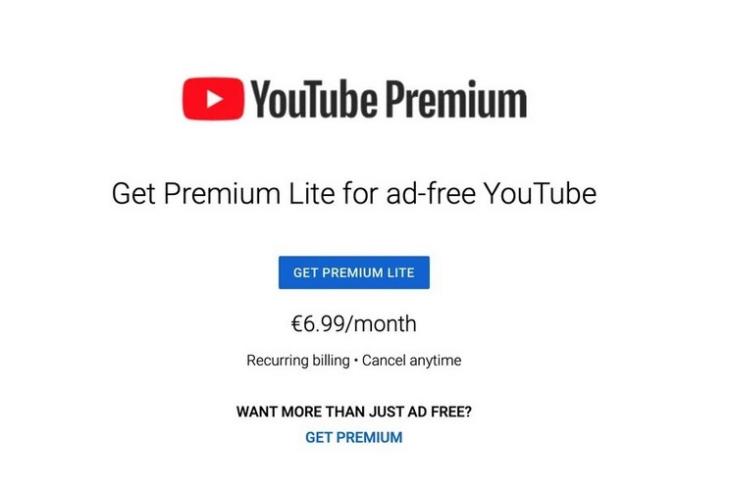 Google-owned video streaming giant YouTube is currently testing a new subscription plan to offer an ad-free experience at a cheaper price. Dubbed as the “YouTube Premium Lite” plan, the subscription plan removes a lot of the key features of the premium plan to give users a lower-priced offering.

The new Premium Lite subscription plan on YouTube was initially spotted by a user on ResetEra. However, the Mountain View giant later confirmed that it is currently testing the new plan in a select few regions of Europe. These include countries like Denmark, Belgium, Luxembourg, the Netherlands, Norway, and Sweden.

Now, coming to the Premium Lite plan, it is available for a monthly subscription fee of €6.99 (~Rs. 617) and offers ad-free viewing on YouTube. However, that is the only benefit of this plan as opposed to the higher-priced YouTube Premium plan that offers additional benefits such as offline downloads and background playback. The full-fledged YouTube Premium plan comes for a monthly subscription price of €11.99 (~Rs 1058) in European countries.

“In Nordics and Benelux (except for Iceland), we’re testing a new offering to give users even more choice: Premium Lite costs €6.99/ month (or local equivalent per month) and it includes ad-free videos on YouTube,” a YouTube spokesperson said in a statement.

Now, it is worth mentioning that the Premium Lite plan offers an ad-free viewing experience on Youtube Web as well as on other platforms such as iOS, Android, smart TVs, games consoles, and the YouTube Kids app. However, other than ad-free viewing on the platform, users will not be able to download videos for offline viewing or keep a video playing in the background while switching apps as they could with the standard YouTube Premium plan.

Google says that this is an experimental subscription plan and is currently in its testing stage. So, based on audience feedback and other economic factors, the company will roll out more such plans in the future. Moreover, there is no word on whether the Mountain View giant will introduce the Premium Lite plan in other regions or not.