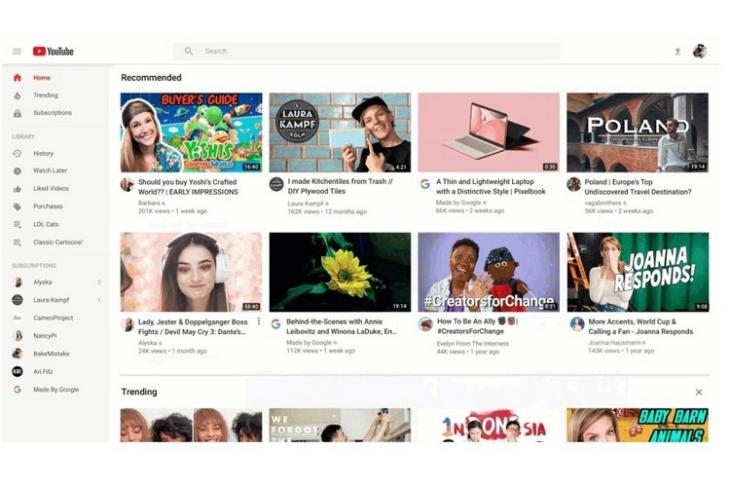 YouTube has rolled out a brand new homepage design that it says will bring more features to enhance the viewing experience. According to the company, the new UI started rolling out Thursday on the standard desktop site, as well as on the Android and iOS apps meant for tablets. The rollout will be a staged one, but will be available for everyone soon.

As can be seen from the GIF below, the new look includes longer video titles and larger thumbnails that the company says will give users a better idea of the content of the videos before clicking on them. The company also removed some content shelves, although users will still find rows of videos for breaking news, music mixes and more. Another interesting addition are channel icons ahead of the video title, which is similar to what Google recently did with its search results.

Better Customization With ‘Add to Queue’

Another little feature is an ‘Add to Queue’ option that will enable users to select a handful of videos to watch next without interrupting the video they are currently watching. “Videos in your queue won’t save after you’ve closed your browser, but you can always save videos to your permanent “Watch Later” playlist, too”, said the company.

Following up with the launch of the ‘Don’t Recommend Channel’ feature on its mobile app earlier this year, YouTube is now rolling it out on its website. It works pretty much the same way, which means you’ll now be able to tell YouTube to stop suggesting videos to you from a particular channel. To do that, you’ll have to just select the three-dot menu next to a video on the homepage, and then select the ‘Don’t recommend channel’ option from the popup menu, as seen below.

Alongside the aforementioned changes, the YouTube website will bring more features that have already been rolled out to the Android app in the recent past. One of those is a new functionality that lets users select their favorite topics and customize their Home feed with related videos. We can look forward to that little addition to the YouTube desktop site in the days ahead.