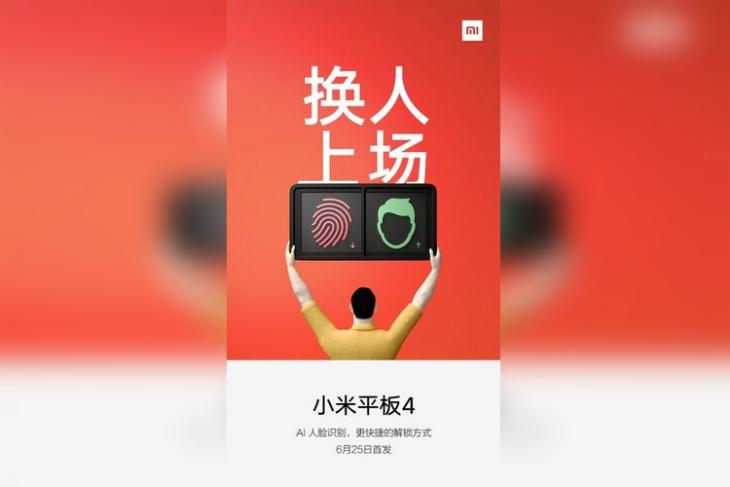 A couple of days ago, Xiaomi started teasing the launch of its next tablet offering, the Mi Pad 4. The Chinese company recently shared a teaser poster for the Mi Pad 4 which is expected to be launched on June 25, 2018, alongside the Redmi 6 Pro. Keeping the hype train moving, Xiaomi has now shared another teaser on Chinese microblogging site Weibo, which suggests that the Mi Pad 4 will come with face unlock technology.

Xiaomi’s latest Weibo post states that the Mi Pad 4 will come with AI-based facial recognition technology that will provide a faster unlocking method. The accompanying teaser poster suggests that the upcoming Xiaomi tablet will ditch the fingerprint sensor in favor of facial recognition as an authentication measure.

The Mi Pad 4’s face unlock feature is AI-based, which means the device will rely on the front camera and AI algorithms for authentication, unlike the Mi 8 flagship which has dedicated hardware comprising of an IR sensor for facial recognition. Nonetheless, the Mi Pad 4 will be the first device in Xiaomi’s tablet line-up to offer the face unlock feature. Aside from the AI-based facial recognition system, Xiaomi’s latest teaser does not reveal any additional information about the upcoming device.

As far as specs go, a previous report suggests that the Mi Pad 4 will feature an 8-inch Full HD LCD display and will be powered by the Qualcomm Snapdragon 660 processor with a 6,000mAh battery keeping the lights on. In the imaging department, the Xiaomi tablet will feature a 13MP (f/2.0) OmniVision sensor and a 5MP (f/2.0) front camera. The Mi Pad 4 might come with portrait mode support, but will lack 4K video recording capability.

The Mi Pad 4 is expected to pack 4/6GB of RAM paired with 64/128GB of internal storage and might be launched in two variants i.e. WiFi and cellular with LTE connectivity. The Mi Pad 4 is rumored to be priced around CNY 1,499 for the low-end variant with 4GB of RAM, while the top model will carry a price tag of CNY 1,999, however, details about market availability are scarce at the moment.