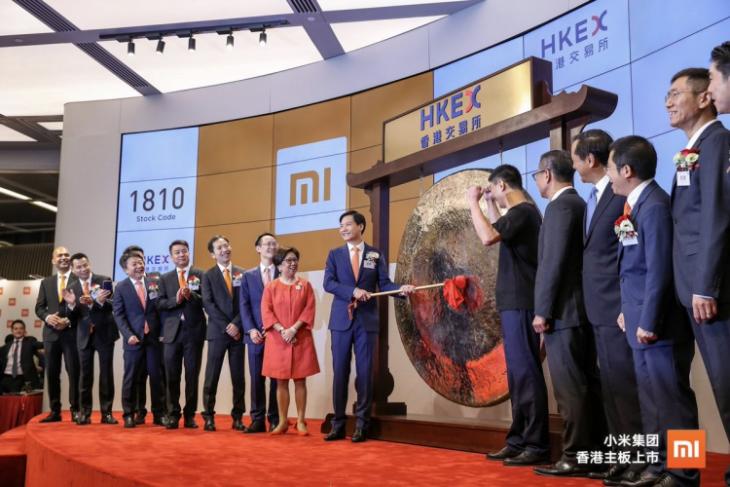 Putting an end to our anticipation, Xiaomi finally went public and the first day of trading has now come to a close. The company would’ve expected a better opening on the Hong Kong Stock Exchange but it was without much fanfare as the stock opened at $HK16.60 when compared to the $HK17 offer price.

Yes, Xiaomi’s stock trading was off to a rocky start and share prices came tumbling down to the lowest point of the day at $HK16 in the first 30 minutes of its listing. Xiaomi’s stock price has since recovered but it still closed under the IPO price at which shares were offered to investors or consumers.

The Chinese giant had offered 2.18 billion shares to its consumers in the HK$17 to HK$22 per share price range. It later picked the lower-end of the price range for the listing, which values Xiaomi at around $54 billion.

Prior to its $50 billion IPO, which is lower than the initially anticipated $100 billion, Xiaomi CEO Lei Jun had taken the stage at the announced a certain policy that favored consumers and showed how deeply the phone maker cared about them. The company had capped its profit margins at 5 percent and decided to share any excess money they make with their users in one way or another.

This was a curious move, especially because it came just ahead of the IPO, and appears to have diluted the investor interest in Xiaomi. The folks over at Gadgets 360 were present in Hong Kong for the official listing and have got an answer on whether the profit margin cap could’ve affected the IPO and lead to a lukewarm response from investors.

Xiaomi’s Chief Financial Officer (CFO) Shou Zi Chew in a statement said, “I think the perspective to take on this cap on hardware profits needs to be a long-term one.” He then continued to add the profit margin cap is not just a commitment from the management of the current generation, but also people who will take over the company in the next 30, 40, 50 years.

The company always boasts about its honest pricing when they launch a new product and Chew says that it isn’t here to make that extra buck. The 5% margin cap was imposed to drive this point home, along with the fact that it is key for them to be friends with the fans of the company. To top this off, Chew says that “the very first product that we had, MIUI, is a product that we built in collaboration with our users. Today, it remains the only OS in the world that’s updated on a weekly basis.”

Finally, he says that the long-term goal of the company is to make amazing products and deliver the best experience to its users. There are many investors, along with consumers who picked up their stock today, who understand the ideology and values of the company. So, the 5% profit margin cap could have affected the IPO but it will become clear to their investors over the coming years.