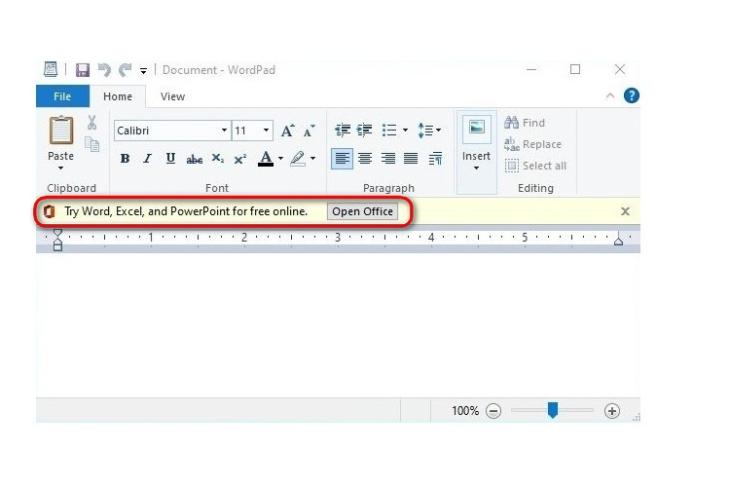 Microsoft is reportedly testing out advertisements in the WordPad application within Windows 10. Believed to have been originally spotted in the latest Insider Preview built of the operating system by Rafael Rivera, the developer of Windows feature-control program, Mach2, the ads are reportedly promoting the company’s own Office web apps that form the free tier of Office 365. It’s not immediately clear, however, whether the company is split testing the new ‘feature’, given that it’s still not showing up for most users.

While Android users have gotten used to the idea of ads within native system apps from a wide range of vendors, including Xiaomi and Realme, it’s a bit of a shock to the system to see Microsoft adopting the practice for Windows. The company had earlier dropped plans to insert apps within the native Outlook Mail application after a massive outcry from users, so it will be interesting to see if the company will do the same this time around as well, or if it will go ahead and implement the plan anyways.

Windows 7 remains popular among a large section of PC users around the world in spite of free updates to Windows 10, largely because of the numerous controversial decisions Microsoft has taken with later versions of Windows regarding design, automatic updates and more. Windows 10, in particular, is filled with advertising on the lock-screen as well as the tiled start menu, although, most of it can be disabled by heading into Settings.

Be that as it may, news about Microsoft’s latest decision to insert ads into native system apps is one more addition to the list of Windows 10 annoyances. It has already started eliciting angry responses from users, so it remains to be seen whether the company will persist with it going forward, or whether it will bow to public opinion and issue a rollback in the coming days.