Skip to content
Home PC Windows What is Windows 10 Pro for Workstations? All You Need to Know

What is Windows 10 Pro for Workstations?

Simply put, Windows 10 Pro for Workstations is a high-end version of the already existing Windows 10 Pro. Coming into picture from the feedback provided by various Windows 10 users through the Windows Insider Program, it is aimed at delivering a better and smoother experience to the users who use high-end PCs. This new edition will come with a unique support for server-grade PC hardware and is designed to support mission-critical workloads.

Though, as a consumer, you may not really be able to test it to its full potential, if you user high-end PC full-blast with Windows 10 Pro for Workstations, your computer will work more responsibly and reliably. So, theoretically, you should be able to leverage the full power of your computer’s hardware. Now to know more details about it, let’s take a quick look at its key features.

There are four major improvements that will make Windows 10 Pro for Workstations the beast it appears to be. Here is a quick description of each of them:

Resilient File System or ReFS is a Microsoft propriety file system that is supposed to be the next big file system after NTFS. To give you a quick comparison, NTFS can handle volumes up to 256 TB whereas ReFS can handle, theoretically, up to 4.7 zettabytes (1 zettabyte = 1 billion TB)!

ReFS handles very large volumes with ease and comes with a few advantages like data scrubbing, protection against data degradation, handling of hard disk drive failure and redundancy, and integrity checking on mirrored storage spaces. This means that ReFS will detect if any of your data becomes corrupt on any of your mirrored drives, and then replace it with the same healthy data in the other drive.

Persistent memory is a method that stores data efficiently in a way that it can be accessed even after you switch your workstation off. This becomes possible as it uses the NVDIMM-N hardware which is a non-volatile memory with an on-board memory power source. Using this will help even the most demanding apps and data with the performance they require in order to work to their full potential. 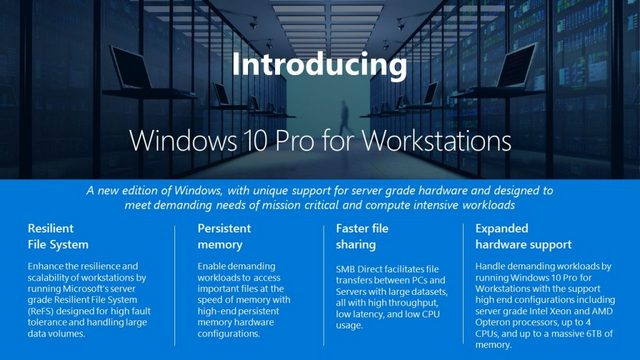 Windows 10 Pro for Workstations will come with built-in SMB Direct which is an extension of the Server Message Block technology. The “Direct” in “SMB Direct” implies that it will also support the use of network adapters that have Remote Direct Memory Access (RDMA) capability. One of the biggest advantages of such network adapters is that each one of them can function at full speed with both a very low latency that provides extremely fast responses to network requests and a very low CPU usage that leaves more power available to other applications running on the system.

For workloads such as Hyper-V or Microsoft SQL Server, or for applications that access large data sets on remote SMB file shares, SMB Direct also allows an increased throughput where the network adapters coordinate the transfer of large volumes of data at line speeds.

As the name itself suggests, expanded hardware support means that Windows 10 Pro for Workstations will now support configurations more than the lower editions of Windows 10. If you are an user with a high-performance computer and server-grade Intel Xeon or AMD Opteron processors, you can now use your computers with up to 4 CPUs and a memory of up to 6 TB.

Now that you know about the key features of Windows 10 Pro for Workstations, the next question that may arise in your mind is how does it differ from the already existing Windows 10. While all the major changes that you will notice have been explained in the previous section, I’ve compared the specifications of the two editions in the table below.

When is Windows 10 Pro for Workstations Coming?

Excited for Windows 10 Pro for Workstations?