Skip to content
Home What is What is NVIDIA Max-Q and What It Brings?

Recently, as part of their Computex keynote, NVIDIA announced a new initiative for high-end gaming laptop design. Dubbed the NVIDIA Max-Q, the company is taking forth the concept of ultrabooks, and merging it with gaming grade laptops. The objective is to collaborate with partners and bring out high-performance systems that provide desktop grade performances with the look and feel of ultrabooks. In other words, you get to enjoy lag-free games on your slim profile laptop. But how is this actually achieved? If you’re baffled by the same question, read on, as we discuss what is NVIDIA Max-Q and what it brings:

What is NVIDIA Max-Q?

NVIDIA Max-Q is NVIDIA’s technological advancement in the field of gaming laptops, that allows for a slim gaming rig with support for NVIDIA’s powerful GPUs. Max-Q utilizes an innovative design approach that helps in creating of laptops as thin as 18mm while being equipped with desktop grade graphics of GeForce GTX 1060, 1070 or 1080 GPUs. Compared to similarly-sized laptops, the Max-Q offers up to 70% increase in the gaming performance. This also allows for 4K 60fps gaming on a thin and lightweight laptop, which many considered a dream for ages.

The name Max-Q comes from the aerospace industry. In the aerospace world, Max-Q is referred to as the point where the aerodynamic stress on the spacecraft is the highest. Everything is therefore engineered around Max-Q, since it is the toughest condition that space-faring vehicles encounter. In the world of thin laptops, the main challenges come in building a laptop with space and weight constraints while attempting to keep the performance at the maximum. Not to mention the fact that the thermal and electrical limitations add on to making the task tougher, which often results in a lack of performance. NVIDIA Max-Q design, on the other hand, helps in allowing thin gaming laptops to operate at their peak efficiency to deliver peak performances. The Max-Q technology allows OEMs to design gaming laptops as thin as 18mm with the power efficiency and performance of the GeForce GTX 1080. 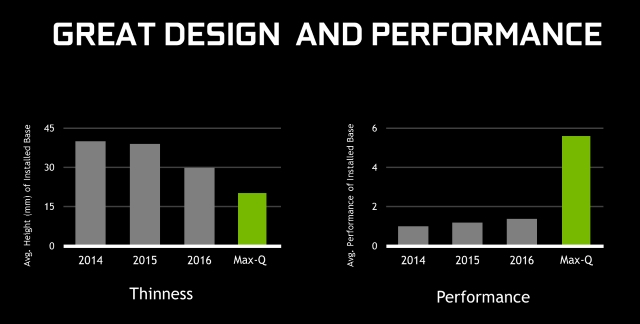 How Does Max-Q Work?

Thin laptops come with challenges revolving around power consumption while working within the space and weight constraints. As a result, these laptops aren’t able to achieve their full potential. You may have even noticed that most thin laptops or ultrabooks don’t even have a dedicated cooling fan. Instead, they just design the laptop to facilitate the cooling. Furthermore, in all GPUs, the performance increases significantly with the increase in power, but the improvement starts to decrease once you reach the upper limits of the GPU. In this very state, the increased power usage also demands larger cooling solutions and faster, louder fans. Hence, the need for large, bulky chassis and audible cooling solutions is prominent in the current generation of high-performance laptops.

Having understood the concept of design, NVIDIA along with OEMs have crafted innovative new chassis and cooling systems, with a new thinking and engineering. The Max-Q laptops, instead target the moment of peak efficiency, and hence are able to avoid all such issues. The NVIDIA Max-Q design allows laptops to maintain a sweet spot between power and performance, which allows for the GPU to consume less power. As a result, there is less heat emitted, which allows the system to run at a lower system, thus reducing the requirement for the fans to spin a lot, resulting in a much quieter system. 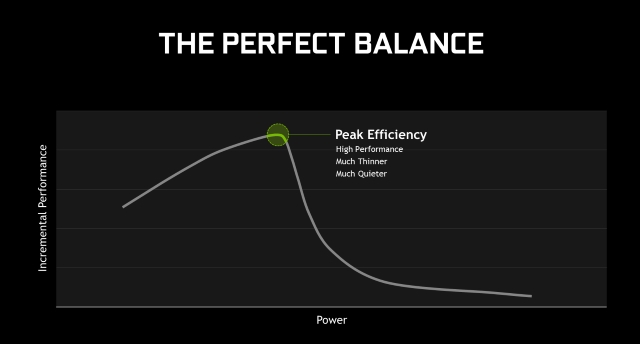 Consequently, these new Max-Q laptops have the perfect balance between performance, power usage, and noise, running up to 70% faster than similarly-sized laptops. They’ll fit in most bags, they won’t break your back, and they’ll deliver a much-improved experience compared to previous-generation laptops.

WhisperMode Technology comes as a part of the NVIDIA GeForce Experience, which aims to provide a reduction of sound pressure levels of up to 50%. Technically, the WhisperMode dampens the din of the fans in the system by making use of Intelligent Frame Pacing (IFP). It achieves the feat by applying power-efficient graphics settings and intelligently paced frame rates. The final result is an excellent balance between the acoustics, graphical details, and performance, thus providing a better gaming experience overall to the user. 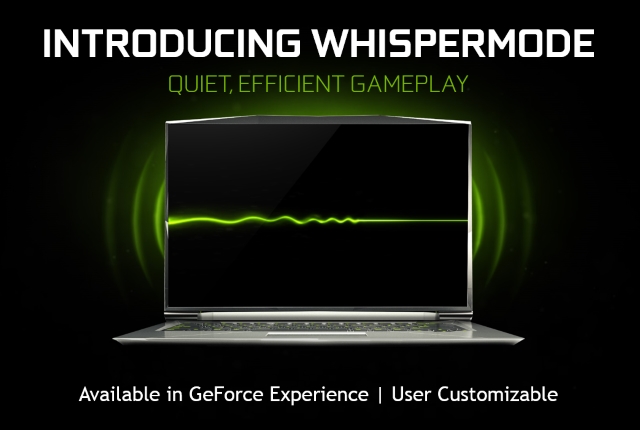 Where Do You Compromise

All good things come with a price, and you can’t just lower the power consumption for a GPU just like that. As mentioned above, the Max-Q technology focuses on the peak performance rates of the GPU. Thus, in order to lower the power consumption, the company has resolved to limit the peak performance limits of the GPUs. For example, a typical GeForce GTX 1080 laptop has a base clock speed of 1,556 MHz with a boost clock speed of 1,733 MHz. Comparatively, a GeForce GTX 1080 laptop with Max-Q technology allows a base clock speed of 1,101 MHz to 1,290 MHz, and the boost clock speeds are limited to 1,287 MHz to 1,468 Mhz, depending upon the laptop design. In a nutshell, you see a 15%-28% difference in the clock speeds.

Except for the capped out clock speeds, everything else on the GPU is the same. The architecture remains the same, and you have the same number of CUDA cores, the same amount of VRAM as a normal desktop 10-series NVIDIA GeForce GPU.

While all this sounds good on paper, the lower clock speeds do tend to downgrade the GPUs performance. We ran a couple of benchmarks, comparing the MSI GT73VR (GTX 1080) with the ASUS ROG GX501 (GTX 1080 with NVIDIA Max-Q) and the Alienware 15 R4 (GTX 1070), to compare the performances of the 3 GPUs.

On the 3DMark FireStrike Benchmark, the GTX 1080 Max-Q does score better than the GTX 1070 on the Alienware 15 R4 but is vastly outperformed by MSI’s GTX 1080. While the score difference is quite high, it is worth noting the fact that benchmarks push the GPU to its peak clock speeds, where the Max-Q technology is already capped.

As far as the gaming performance is concerned, the GTX 1080 with Max-Q performs more like a GTX 1075 (if there were any), sitting comfortably between the GTX 1080 and the GTX 1070.

The Cinebench R15 benchmark focuses primarily on the CPU and uses the GPU for acceleration. As such, the ROG sits alongside the Alienware 15 R4, thanks to the 7th-gen Kaby Lake architecture on them, surpassing the MSI with its 6th-gen architecture.

Since NVIDIA Max-Q requires carefully crafted designs with a partnership with NVIDIA, currently only a handful of gaming laptops support this technology. Some of them are the  Asus ROG Zephyrus, the Acer Predator Triton 700, the MSI GS63 Stealth Pro, the Aorus X5 MD and the Clevo P950HR.

Power Up Your Gaming Laptop With NVIDIA Max-Q

Gaming laptops are preferred by a lot of people who like to game while on the move. Sadly, the current crop of laptops come under the category of heavyweights, acting more like a desktop replacement. Thankfully, NVIDIA Max-Q technology is here, to finally make gaming laptops portable again. Tell us what you think about NVIDIA Max-Q and which laptop would you like to see it on in the comments section below.