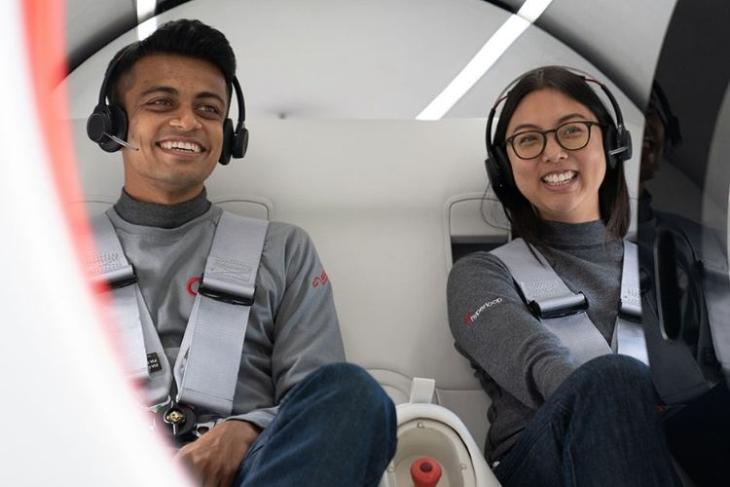 In a recent, what we can call, a milestone-event, a Hyperloop system has successfully carried its first passengers as part of an initial test run of the upcoming, futuristic transportation system. The test run was conducted by Virgin Hyperloop, the US-based company that has been planning to bring the magnetic mode of transportation to India in the coming years.

Now, Hyperloop, if you don’t know, is an upcoming mode of high-speed transportation that aims to utilize the power of magnetic-levitation to deliver airplane-like speeds. The idea was conceived by Tesla’s Elon Musk back in 2012 and since then many companies have been working on it to bring the mode of transportation to the market as soon as possible.

However, as Hyperloop is the first-of-its-kind concept, the safety of the passengers while traveling inside these tubes has been a big concern. So, to put those concerns to rest, Virgin Hyperloop’s newly unveiled two-seater XP-2 test system recently carried its first passengers in a test run at the company’s DevLoop test site located in Las Vegas, Nevada.

“I can’t tell you how often I get asked ‘is hyperloop safe?’ With today’s passenger testing, we have successfully answered this question, demonstrating that not only can Virgin Hyperloop safely put a person in a pod in a vacuum environment but that the company has a thoughtful approach to safety which has been validated by an independent third party,” said Jay Walder, the CEO of Virgin Hyperloop.

Now, although a Hyperloop system is supposed to reach a high-speed of 760 mph (~1,223 km/h), Virgin’s test system was able to achieve a top speed of only 107 mph (~172 km/h). However, the company says that the aim of the test was not to reach an all-time high speed but to successfully carry the first passengers from one point to another inside a low-pressure tube. This showed that the new mode of transportation is pretty safe when it comes to transporting passengers.

“For the past few years, the Virgin Hyperloop team has been working on turning its ground-breaking technology into reality. With today’s successful test, we have shown that this spirit of innovation will, in fact, change the way people everywhere live, work, and travel in the years to come,” said the company’s founder, Sir Richard Branson in an official press release.

Virgin Hyperloop One Rides in India Will Be Cheaper than Flights