If you’re looking for a video editor, I’m sure you’ve seen a bunch of common names pop up on your internet research. VEGAS is most likely one of them, and for good reason. We’ve previously used the VEGAS Movie Studio 15, and we really liked it, and now, the company has rolled out a new, more exciting, and more powerful version of its video editing software — VEGAS Movie Studio 16 (starts at $49.99). So what is this software like, and what features does it bring to the table? Let’s take a look.

Vegas Creative Software has stuck to its guns when it comes to the user interface. Movie Studio 16 doesn’t change a lot in terms of the interface from its predecessor and that’s great. The UI here is neat, with tools and options well arranged, and it doesn’t just throw it all in your face the moment you open it, which is great. If you’ve used other professional video editors, like Final Cut Pro, or Adobe Premiere Pro, you’ll notice that VEGAS Movie Studio 16 doesn’t have a UI as exhaustive as those, but that only works in its favor — it doesn’t look complicated, and feels easily approachable even for beginners. 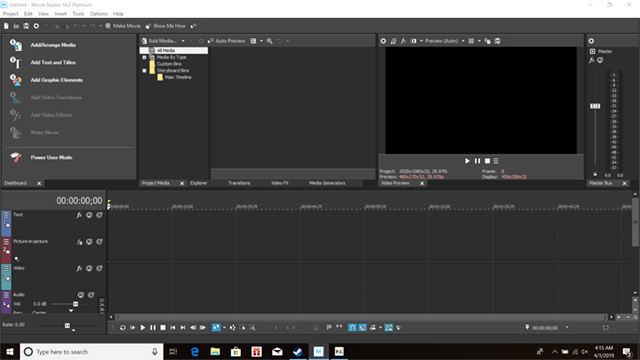 That said, the software brings a bunch of awesome new upgrades to the mix. For one, you can now seamlessly switch between different user interfaces designed specifically for the task at hand. There’s even a Power User mode here now, for the professionals out there, which brings all of the tools to the forefront, letting you easily access and use the ones you want without having to hunt for them inside the menus.

VEGAS Movie Studio 16 brings a bunch of awesome features that will really help you create the best videos, and with minimum hassle.

VEGAS Movie Studio 16 makes Storyboards even more useful and interactive. You can now make quick edits and trims in the Storyboard itself, and the main timeline of your project gets updated automatically, in real time. This works if you make edits in the timeline too, by the way, so your Storyboard and timelines are always synced with each other. You can also quickly replace videos and the changes will reflect immediately across your entire project. It’s a pretty easy way to trim videos, or change their order. 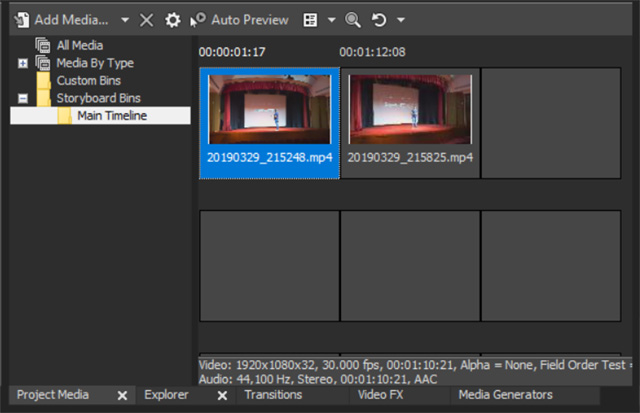 You know what blows? When you’re editing a video, and you lose power, or your PC crashes. If you saved your progress, that’s nice, but what if you didn’t? Well, with VEGAS Movie Studio 16, the software automatically makes saves after every edit you make, so you never have to worry about losing progress due to a power failure, or anything else for that matter.

Editing a huge project? Don’t want to add all the files to your timeline, then find the exact clips you need, and trim them out? VEGAS Movie Studio 16 has got your back there, too. The software comes with hover scrubbing support, so you can simply hover your cursor on the clip, and move it forward and backward to scrub through the entire footage right there, making it easier to lift up parts of the footage that you actually want to work with and dive right in. 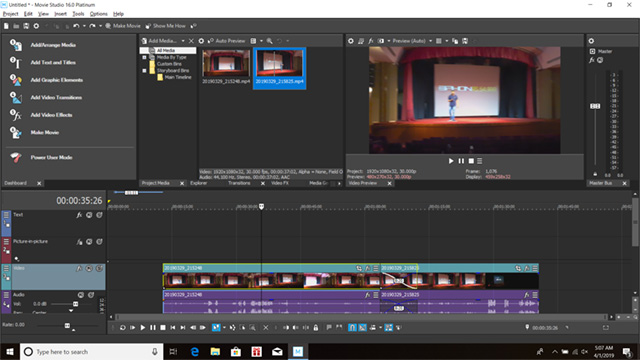 With VEGAS Movie Studio 16, you can easily preview multiple video files with just the push of a button. The software allows you to select multiple files and just play them once, and it automatically plays them back in the sequence so you can quickly get a preview of all the videos you want. What’s even better, is that with Interactive Storyboards, and the new in-out points feature in VEGAS Movie Studio 16, you can even use this to get a rough draft of the edit before actually even editing anything. It’s pretty cool and it’s definitely a very useful feature to get a general idea of what you’re working with, and what you’re trying to make. 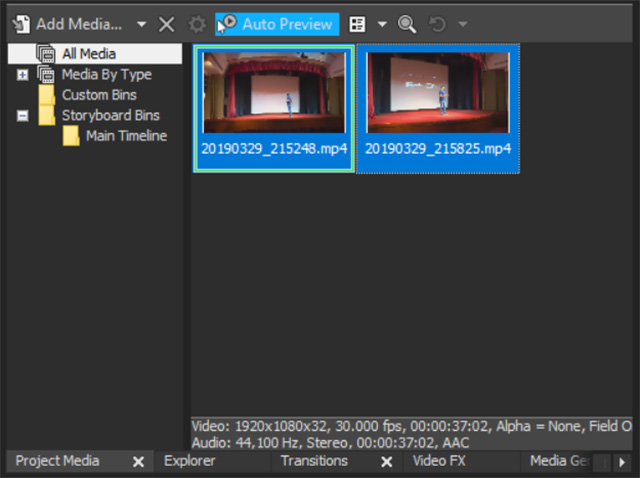 Are you just beginning your video editing journey? Or maybe you’re looking for a quick edit on a video. Whatever the reason, VEGAS Movie Studio 16’s brand new Guided Video Creator can help you. With this, the software basically creates a video for you, out of the clips you select, the transitions (or fades) you want, the title you want to set, and it even renders it out (and shares it to social media, if you choose) all on its own. It’s a pretty impressive feature, and one I can definitely see being useful when I’m editing clips in a hurry. 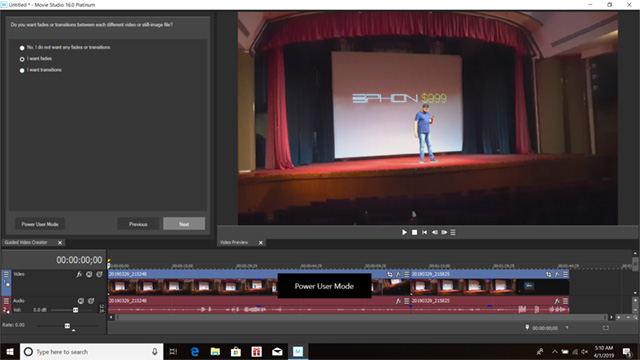 Motion tracking is a feature that was widely requested by users of VEGAS Movie Studio, and with the latest version of the software, it’s finally here. You can use the Bézier Mask FX to apply motion tracked effects to objects in a video. What’s more, you won’t need to set manual keyframes for the tracking, VEGAS Movie Studio 16 does all of that on its own, and you can quickly get professional grade motion tracking done on your own. 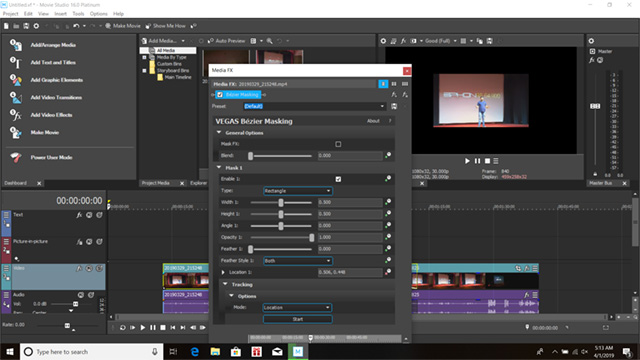 360 degree videos may not have taken the world quite by storm, but they’re still pretty cool to watch. If you’re planning on making 360º videos, you don’t need another video editor for it. VEGAS Movie Studio 16 comes with complete 360º editing workflow. You can easily stitch together multi-camera views, dual fisheye videos, and even preview 360º videos in the software. Plus, it supports direct publishing to websites like YouTube.

VEGAS Movie Studio 16 also comes with a feature called ‘Temporary Ignore Event Grouping.’ This is awesome when you need to edit only a couple of clips in a grouped event and you don’t want to move or change the entire event just for those few clips. With temporary ignore event grouping, you can easily edit out the clips you want to without messing with the entire group. It’s a very handy feature for sure.

Transitions can set the whole mood of a video, and with VEGAS Movie Studio 16, you can use the NewBlue Transitions 5 update that brings over 400 transition presets in 37 different plugins, including things like ‘Explode,’ ‘Sliced Cubes,’ ‘Shredder,’ and more. 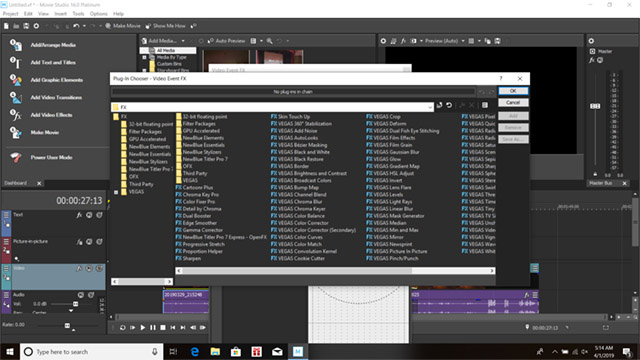 With VEGAS Movie Studio 16, you can also make use of the NewBlue FX software to get some incredible stuff for your videos. You can use the Titler Pro Express to create awesome looking titles on your project, or go with the Elements 3 Chroma Key Pro to use green-screens in your project better. There’s also the Fluid Template Pack that brings a bunch of awesome things like powerful motion graphics, and lower thirds for your videos.

We’ve previously used VEGAS Movie Studio 15 and we were really impressed by it. The user experience on this latest update to the awesome video editing software is even better. The software comes with all the video editing tools you will need, and brings a bunch of advanced stuff into the mix, like support for motion tracking, 360-degree videos, and a lot more.

Apart from that, VEGAS brings all the stuff you might need to edit your videos such as Chroma Key support, hover scrubbing, multiple file previews, interactive storyboards, and a lot more. It’s truly a solid video editing software that you can use to create some incredible videos.

With all of those features, I’m sure you must be thinking about the pricing. Well, VEGAS Movie Studio 16 is a really well priced software. VEGAS Movie Studio 16 starts at just $49.99 for the basic version which includes things like guided video creator, mode based workflow, and more, or you can spend $79.99 to get the Platinum version that will bring in video docking support, and the NewBlue Transitions Ultimate pack along with it. If, however, you want all the things VEGAS Movie Studio offers, you can check out the VEGAS Movie Studio 16 Suite for $139.99. Plus, there’s a free trial available as well, so you can check the software out before you spend your money on it. 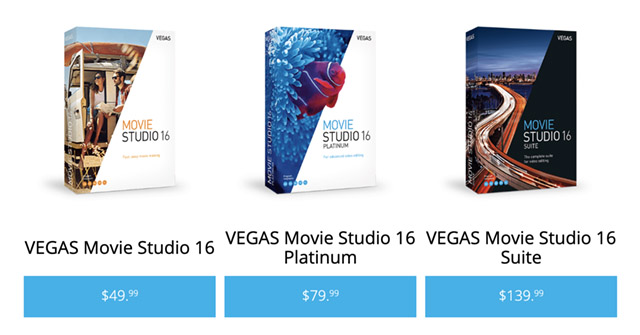 All in all, the VEGAS Movie Studio 16 is a really powerful video editing software that’s incredibly easy to use as well. Plus, it brings a plethora of power-user features including things like precise motion tracking, chroma key, support for 360-degree videos, and a lot more. If you’re looking for a really nice and easy to use video editor, you should definitely give VEGAS Movie Studio 16 a shot.