Skip to content
Home News Valorant’s New Agent is Called Chamber; Here Are All the Abilities and Ultimate 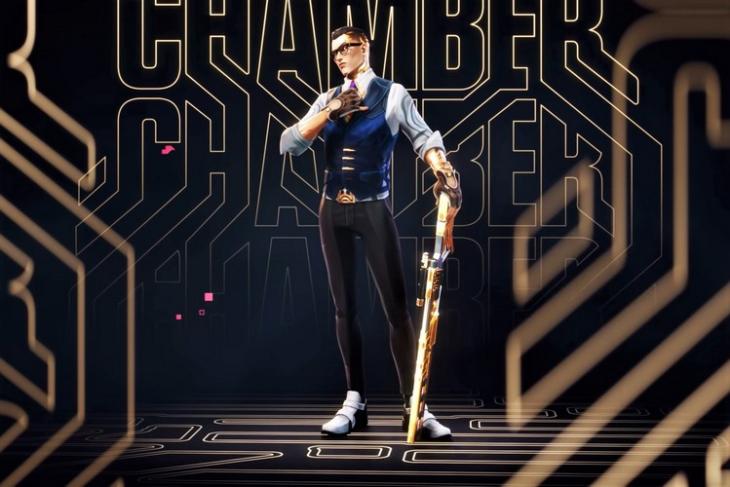 Riot Games has been on cloud nine with the massive popularity of its 5v5 tactical FPS game Valorant. The developers have added various new maps and agents since the initial public release last year. Now, after various leaks and teasers, Riot has finally confirmed its next new agent for Valorant. Named Chamber, the new Sentinel-class character is a classy French weapon designer who brings a unique skill set to the game. So, here’s everything you need to know about Chamber in Valorant.

Valorant Chamber: Everything You Need to Know

Riot has been teasing its next Valorant agent for the longest time, leaving breadcrumbs in the game and promotional content. Prior to the official unveiling, the upcoming agent leaked with the codename “Deadeye”. However, we now know that his actual name is Chamber and he is a weapons expert and a designer of custom weaponry from Paris. Check out the official reveal trailer for the upcoming Valorant agent Chamber right below.

Chamber is the second Sentinel-class agent that Riot Games has added after Killjoy. He also joins Sage and Cypher, making a total of four Sentinel agents in Valorant. However, unlike Sage and Cypher, Chamber brings a unique set of abilities that mostly involves secondary weapons disguised as abilities. Let’s take a look at each of his abilities in the following segment.

Riot’s Valorant has adopted a weapon-first approach with Chamber when it comes to his abilities. As usual, you have four unique abilities for Chamber. They are named Rendezvous, Headhunter, Trademark, and Tour de Force. You can check out the details about each of the abilities right below:

Rendezvous is primarily a teleportation ability, much like Yoru’s Gatecrash ability, that allows Chamber to place two anchor points at different locations in a map. During a round, when the agent is in range of any of the placed Rendezvous anchors, he can reactivate them to instantly teleport himself to the respective anchor point.

If an anchor remains unused during the round, Chamber can pick it up and redeploy them, presumably, after a short cooldown timer in Valorant.

Trademark is a trapping ability that works like the combination of Killjoy’s Alarmbot and Sage’s Slow Orb. With this one, Chamber can place an alarmbot-like device that will scan its surrounding for enemies.

When an enemy nears a trap, it will destabilize the terrain around its area after a short countdown. This will slow down enemies and prevent them from running into a specific area, giving you a chance to take them out.

Using the Headhunter ability, Chamber can equip a full-fledged gun to take down enemies. So, with this ability, Chamber would be able to invoke a heavy pistol that looks like a Sheriff (one of the weapons in Valorant) with a high-end skin.

It essentially works as a regular heavy pistol and lets players buy up to eight bullets, each costing 100 credits, during the pre-round buy phase. Hitting the alt-fire button will also bring up an aim-down sight that looks like the Guardian (one of the in-game weapons) ADS. Now, players will be able to take advantage of this ability during economy rounds (when you are saving credits).

Tour de Force is the ultimate ability of Chamber in Valorant and lets him invoke a sleek, customized sniper rifle. It is equipped with five one-shot bullets. Stressing on the term “one-shot” here as the bullets will kill an enemy with just one shot, whether it hits the head, body, or the legs. You just need to connect the shot to take down enemies. Furthermore, with every kill, the ability will also create a lingering field. It will slow down enemies caught inside of it.

So, as you can imagine, it is a combination of the Operator (in-game weapon) and the one-shot golden gun that is present in the Spike Rush mode in Valorant. And as the Operator is a pretty high-priced gun, even after a recent price decrease, Tour de Force will be a great ability to have when you would want to Op but won’t have the credits to buy one.

So, these are the abilities that Chamber brings into the mix. As two of his primary abilities are gun-based rather than tactical, the character will be a great choice for players who are more into gunplay instead of ability-based playstyles.

However, Riot has received some backlash from the community for the upcoming agent. Why, you ask? Well, during Valorant’s initial release, the developers stated that the game is a gun-first-ability-second kind of title, where players have to rely more on gunplay rather than their abilities.

“Abilities create tactical opportunities to take the right shot. Characters have abilities that augment their gunplay, instead of fighting directly with their abilities,” stated Nicolo Laurent, the CEO of Riot, back in 2019. So, players complain that two of the main abilities of Chamber are actual guns, without any tactical elements to them. Riot has not responded to these complaints as of now.

Now, coming to the availability situation of Chamber, Riot usually releases new agents or maps with the renewal of its Battlepass seasons i Valorant. However, this time around, the developers have decided to release the upcoming agent two weeks after the new season goes live.

Riot issued a formal statement to announce the delay and stated that the upcoming agent requires some final refinement touches before the release. “As development progressed on the new Agent, it was clear to us that they were not at the quality bar you’ve come to expect from us. It’s why we’ve opted to hold the Agent for an additional two weeks, while we work on polishing up those final aspects,” said John Goscicki, Valorant’s Character Producer at Riot Games. So, Riot is expected to release Chamber sometime during mid-November with the 3.10 patch update.

Meanwhile, with the 3.09 patch, the new Battlepass season will go live in Valorant. It will bring various new cosmetic items, including gun skins, player cards, gun buddies, sprays, and more. So if you are a Valorant fan, there are many new things coming and we cannot be more excited. Also, what do you think about Chamber? Let us know your thoughts in the comments below.